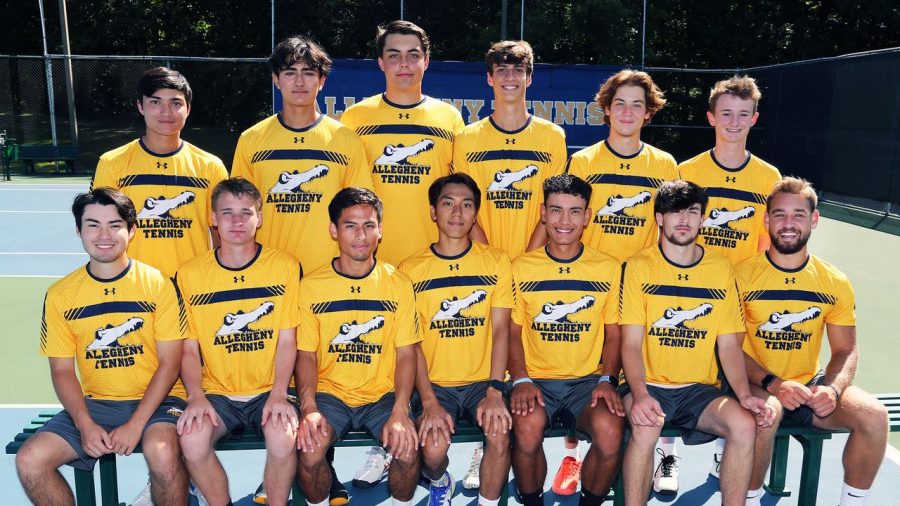 The Allegheny men’s and women’s tennis teams opened their seasons on Saturday, Sept. 4 with impressive victories over Washington and Jefferson’s teams. Both teams played their matches at Robertson Athletic Complex. The men won nine sets to zero while the women won seven sets to two.

In his six seasons as head coach of Westminster, Hayden was named the Presidents’ Athletic Conference Women’s Coach of the Year twice, in addition to leading his women’s team to two Division 3 championship appearances. He was also able to capture two PAC titles during his tenure with the Titans.

“With our new coach coming in, everybody has really high hopes for this season, we got (to Robertson) and we had been practicing hard, everyone felt loose and really good,” said men’s tennis player Nathan Chubb, ’23. “We just had the confidence in our matches to perform really well. Everyone was on their A-Game.”

This fall opener also marked the start of the first full tennis season since 2018-19. Because of this, the Gators were excited for a fall match against a school they would not play during their spring conference season.

Furthermore, the teams look forward to returning to a normal season, as only seniors players have played a full fall and spring season.

“I think we’re excited because we weren’t able to have a full season last year,” said women’s tennis player Tiaralei Cade, ’23. “We’re also excited to play new teams because (Coach Hayden) is setting us up against new teams this fall, so everything is new.”

The men’s sweep of W&J came from solid matches in singles competition as all six Gators did not allow their opponents to win a game. In doubles competition, the Gators were also strong, as Anton Hedlund, ’25 and Julien Voisey, ’24 swept their set, eight games to none.

The women’s win came with another full team effort, as the team only lost two singles sets in their match. The Gators were very strong in their doubles competition, however, as they were able to sweep three sets to none.

The Gators women’s team carried their momentum from the opening victory into the next weekend at the Oberlin Invitational. There, the team was able to capture 17 match wins, led by Katherine Stancil, ’23 with five of her own.

“Overall it was a great start to our season, doubles was strong as well as singles for the most part,” said women’s tennis player Ella Swan ’23. “We were very prepared and everyone hit their shots so it was nice to come out on top.”

This early success is exciting for players on both teams, but not surprising as Hayden is no stranger to success; the Point Park University alumnus won the PAC Women’s Coach of the Year in 2020.

Players on the men’s and women’s teams have taken a liking to their new coach’s style and his appreciation for the mental side of the game. This was cited by players as a big improvement to the program from years past.

“(Coach Hayden) has been working with us, he’s been pretty effective in how we train and he adheres to what we need to do in order to win and succeed,” Swan said. “He works not only on the tennis game but also our mentality for competition.”

Hayden’s standout coaching ability has already been commended by his players, as well as his will to win and commitment to success. After a few losing seasons in a row, the teams seem excited and ready to take on this new mentality from their new coach.

Beyond this season, the Gators look forward to hopefully building a culture of success around the tennis program for years to come.

“In previous years we haven’t really had that focus, and we were more focused on individual matches,” Chubb said. “But he wants to make our team a championship team and I think that was something the whole team needed to hear.”

As tennis continues through their fall season, Gator fans can watch the men’s team compete against Walsh University at Robertson on Sep. 16 at 4 p.m. The men’s and women’s teams will be at home again when they play Mount Union University on Sept. 25 at 1 p.m.