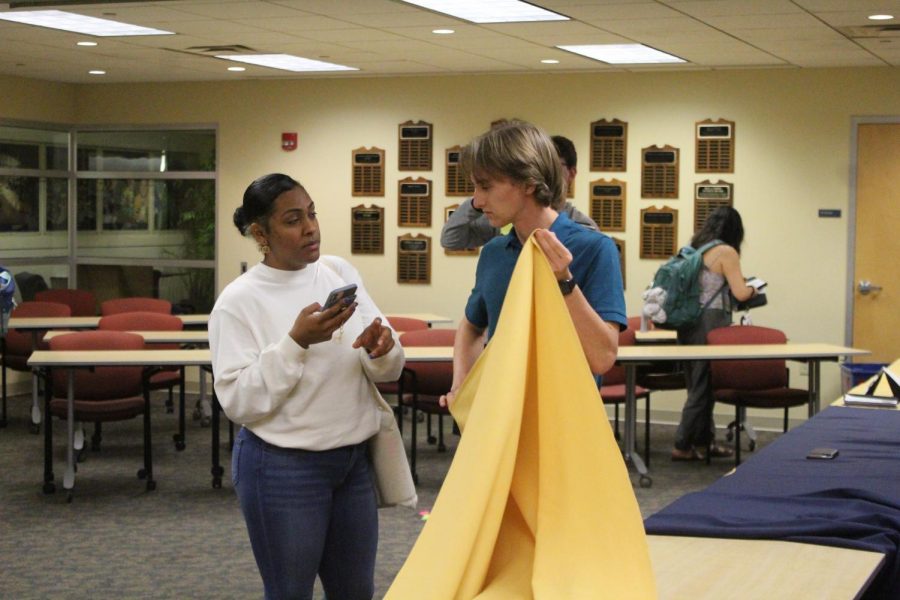 Vice President Sophie Adams, ’22 gaveled the weekly General Assembly of the Allegheny Student Government to order at 7:30 p.m. on Tuesday, Sept. 14 in room 301/302 of the Henderson Campus Center, setting off a flurry of raised name-cards and knuckle-rapping as the body confirmed several students to the College Committee Council, among other business.

Following the approval of the previous week’s minutes, Chief of Staff Gena Pena, ’22 moved onto the question of applicants for student representatives on the college’s committees. These committees help oversee the college’s curriculum, finances, academic standards and other areas of the administration’s policies.

In total, the assembly heard from four candidates who were present at the meeting, as well as a fifth who did not attend, but submitted a bio for the body to read. Faythe Schulte, ’23, applied for the Study Away and Campus Internationalization Committee.

“Not only am I planning to study away next semester, but I am also very much involved with the Global Citizen Scholars program here on campus, where we have been working to brainstorm solutions for some of the world’s largest problems,” Schulte said. “I believe that I can also help build stronger relationships between our international students here on campus as well as our domestic students, because I feel as though sometimes there is still that division and that maybe that could be stronger.”

Adam Rumble, ’24, did not specify which committee he would be on but hoped that he could properly represent the sophomore class after the difficult first year brought on by the COVID-19 pandemic. Rumble specifically pointed to people in his hall as a sign that the college needs to focus on students who aren’t engaging as much with their community.

“I see a lot of kids who aren’t very social and don’t like to get out and communicate, and it kind of gets to me,” Rumble said.

Peter Alegre, ’23, was not present, but submitted a bio that Pena read from the Cabinet dias.

“I am familiar with the college committee and dedicated to serving the student body,” Alegre wrote. “My previous leadership includes serving as (President of the Association for Asian and Asian-American Awareness) and Phi Delta Theta president.”

Katie Perez, ’24, put forth her candidacy for the Campus Life and Community Standards committee. Like Schulte, Perez is a part of the GCS program, and wants to apply that experience to the Campus Life Committee.

“There’s a lack of representation and understanding for minorities here on campus (like) international students,” Perez said. “Helping ensure that this environment is safe and welcoming to everyone is really important.”

The final applicant was Dhivyanka Raju, ’25. Raju put forth her name for the Curriculum Committee, and cited a personal interest in the coursework offered at Allegheny.

“I’d like to be a part of (making the curriculum more open),” Raju said. “(I would also like to) help all of the students and myself explore Allegheny more because as freshmen it’s kind of overwhelming with everything that’s offered here.”

After the candidates introduced themselves, Olivia Brophy, president of the Class of 2023, moved to approve all five candidates as a slate, a motion seconded by Senator Alexa Solomon, ’23. Adams then asked the candidates to leave the room and the body voted unanimously, with Senator Payne Rizzer, ’24, abstaining to approve the slate.

After the candidates were confirmed, Pena also announced committee assignments for ASG senators. Two senators each were appointed to the Rules, Finance, Communications and Press and Diversity and Inclusion committees. One senator apiece was appointed to the Sustainability, Community Relations and Organizational Development committees.

Senator Kristen Cadham, ’24 moved to approve Rumble, and Senator Bridgit Hayes, ’23, seconded the motion. Adams then immediately asked if there were any abstentions, as if the body was already in the process of voting.

When informed that the body was not yet voting on the issue, Adams restarted the process by asking for the votes of those in favor of Rumble’s candidacy. Once the body had raised their name-cards in assent, Adams was alerted that, as with the previous slate of candidates, Rumble had to depart the room during the voting process.

Once the procedural votes were cleared, Rumble was confirmed to the committee unanimously, with Rizzer abstaining again.