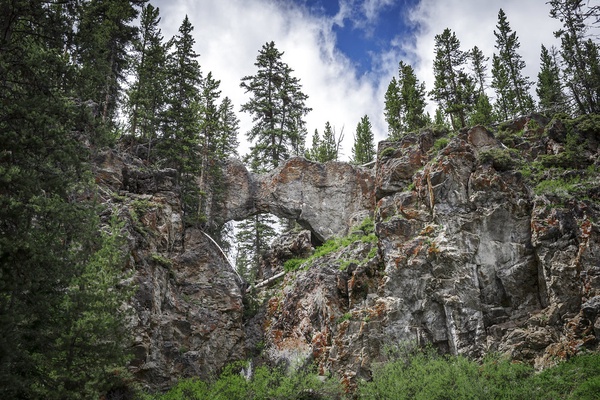 A picture of the natural land bridge in Yellowstone National Park. The volcano rests dormant, for now, beneath the park.

According to a new study done from Oregon State University, there is a much higher chance of a catastrophic supervolcano eruption somewhere in the world within the next 100,000 years.

Associate Professor Martin Danišík spoke on this issue.   Danisik and his colleagues studied Lake Toba, a body of water in Sumatra in which a supervolcano measured at 62 by 19 miles (100 km by 30 km) is located.

Scientists predict that this supervolcano last erupted 74,000 years ago, and believe that the eruption resulted in the release of six billion tons of sulphur dioxide into the atmosphere. Scientists believe that the global temperatures plummeted by 15 degrees Celsius, or 59 degrees Fahrenheit.

Their research has led them to believe that the eruption resulted in a genetic bottleneck in human evolution. In other words, they believe that between 50,000 and 100,000 years ago, the human population shrunk to between only 3,000 to 10,000 individuals.

According to Sky News, there are 20 known supervolcanoes on Earth, including one beneath Lake Toba and another beneath Yellowstone National Park in the United States.

Yet, the most recent super-eruption occurred roughly around the year 26,500 BC and came from a supervolcano that is located beneath Lake Taupo in New Zealand.

Knowing when these supervolcanoes last erupted is crucial in understanding and approximating when the next eruptions will occur. Professor Danisik spoke to this issue in a statement to Scitechdaily.

“Gaining an understanding of those lengthy dormant periods will determine what we look for in young active supervolcanoes to help us predict future eruptions,”Professor Danišík said, “Super-eruptions are among the most catastrophic events in Earth’s history, venting tremendous amounts of magma almost instantaneously. They can impact global climate to the point of tipping the Earth into a ‘volcanic winter,’ which is an abnormally cold period that may result in widespread famine and population disruption.”

Scientists are able to better understand when eruptions have occurred in the past by using particular minerals in regions near the supervolcano.

Professor Danisik and his team were able to investigate the fate of the magma from the explosion by using the minerals feldspar and zircon. These minerals hold records of time, which are determined by the accumulation of gases argon and helium as time capsules in the volcanic rocks.

“Using these geochronological data, statistical inference and thermal modeling, we showed that magma continued to ooze out within the caldera, or deep depression created by the eruption of magma, for 5,000 to 13,000 years after the super-eruption, and then the carapace of solidified left-over magma was pushed upward like a giant turtle shell,” Danišík stated.

The events in Yellowstone National Park are making people wonder if the supervolcano hidden under the national park is likely to erupt anytime soon.

The volcano hidden under the surface of the park is said to stretch across a 43 by 28 mile section, and has been responsible for three cataclysmic eruptions. Scientists estimated that this volcano erupted 2.1 million, 1.3 million and 640,000 years ago.

After calculating the number of years between each eruption, scientists have averaged the number of eruptions to one eruption per every 725,000 years.

What is cause for concern, though, is that in July, Yellowstone National Park experienced more than 1,000 earthquakes, which is a four-year record high. The United States Geological Survey noted that this number is only a preliminary estimate, and that the number of tremors will go up. In a statement, the USGS addressed the large number of earthquakes that occurred in the area.

“This is the most earthquakes in a month since June 2017, when over 1,100 earthquakes were located,” the USGS stated.

According to Express, these earthquakes are not a sign of a future Yellowstone eruption.

In fact, there are many different reasons why the number of earthquakes has increased this summer.

“Earthquakes at Yellowstone are dominantly caused by motion on preexisting faults and can be stimulated by increases in pore pressure due to groundwater recharge from snowmelt,” the USGS stated. “If magmatic activity were the cause of the quakes, we would expect to see other indicators, like changes in deformation style or thermal/ gas emissions, but no such variations were detected.”

Yet, even with this statement, there is still a large number of US citizens, who are worried that one day, the nation might be blindsided by one of these cataclysmic ballasts.

According to the USGS, there is no need for immediate concern, as there will not be another eruption in Yellowstone National Park for another 100,000 years.