Tom Flynn to visit campus during 20th anniversary of 9/11 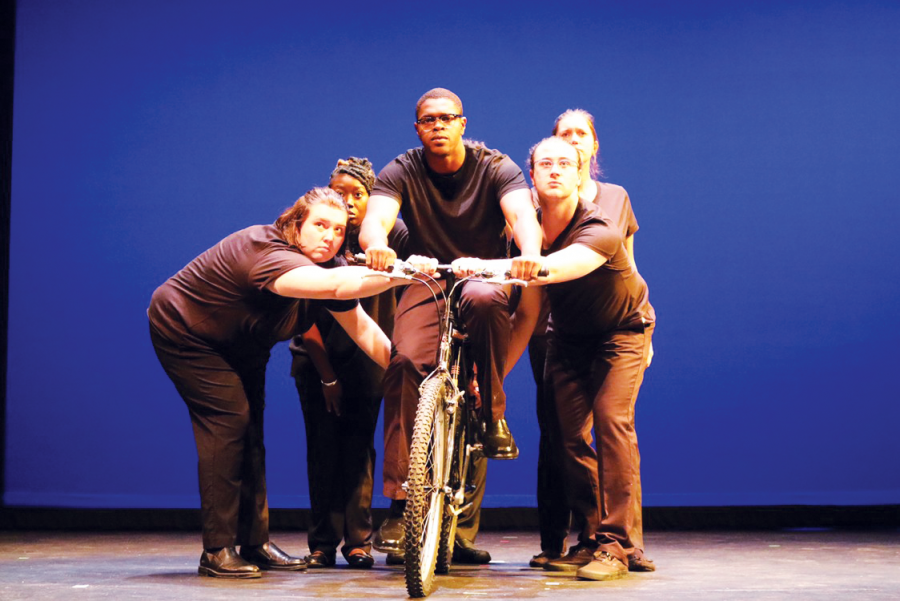 The performers of ‘Bikeman’ look on during dress rehearsal on Wednesday, Sept. 8. ‘Bikeman’ opens this weekend.

For the 20th anniversary of 9/11 the Playshop Theatre is staging a production of “Bikeman,” a play that remembers and recounts in poetic precision that September morning. It returns for the first time since 2013 — when it was last produced at Allegheny — and while much has changed in America and around the world, the core of the production still resonates in a similar way as it did. The play was written by Tom Flynn, a journalist who witnessed the 9/11 attacks first hand.

“Flynn moved from being a reporter and neutral observer standing apart from the event, to a participant, survivor and defining chronicler of that fateful day,” the Playshop’s website states, illustrating the path that led from Flynn’s experience to the production now taking place.

“Bikeman,” directed by Mark Cosdon, professor of theatre and performance studies, is a play taken from a book of poems penned by Flynn, who wrote the poems using Dante’s “Inferno” as inspiration. “Inferno” follows Dante as he descends through the circles of Hell and eventually rises from their depths as the first part of his journey to salvation, and Flynn took this idea and applied it to his own experiences of being on the ground in Manhattan right after the first plane hit the World Trade Center.

This production is different from others that the Playshop has done and other theater productions in general as the play has no set, no real costumes and one prop: the eponymous bike. The production is dependent squarely on the lighting — controlled and designed by Michael Mehler, department chair and professor of communications, film and theatre — as well as the cast of six people. Flynn himself is the narrator and gives voice to the people he encountered on 9/11.

Mehler explained that the lighting not only acts as a narrative device to convey the deeper meanings of the play but also as a practical way to show the audience a change in scene and location without an actual set. It helps paint the picture of what Flynn actually saw and experienced: people jumping from the burning tower, being trapped beneath ground in a parking garage after the first tower fell, escaping to the surface and witnessing the aftermath.

“The lighting is trying to take a similar journey (as Flynn) from being above the surface to feeling like we’re going below into this other landscape, and then coming out,” Mehler said.

While the production is different from the theater of the modern day, it harkens back to the ancient Greek tragedies of the past — the original theater — which was based around the tradition of oral storytelling, with many actors taking turns playing roles and relaying a story to an audience. “Bikeman” brings this tradition into the modern age and induces the same catharsis in the audience.

“Originally, the so-called ‘great epics’ of the Greeks, the ‘Iliad’ and the ‘Odyssey,’ were historical poems that would have been recited aloud, and gradually were dramatized and made into theatrical pieces and this is absolutely the case that we see with Tom’s ‘Bikeman’ too,” Cosdon said.

While “Bikeman” is a production that is deeply invested in various histories, whether they be ancient or fairly modern, this year’s performance is also invested in the recent history of the world, with the pandemic playing its own part in it. The COVID-19 pandemic ravaged the theater world since it struck and Allegheny was no different. The spring 2021 production of “Native Gardens” was a unique case itself as it was performed outside due to social distancing safety measures, but “Bikeman” is the first production in well over a year that is going to be held indoors in the Gladys Mullenix Black Theater in the Vukovich Center for Communication Arts.

“COVID presents its problems but we navigated a lot of that last year,” Mehler said. “Honestly, I think everybody is really excited to be doing a play, even if it has very simple production value, in a theater again with a larger audience.”

The reality of the pandemic was actually advantageous for the production in a way, according to Mehler, since most of the students involved with the production were either born after the tragedy or were only just born when it had occurred and do not remember anything of it.

Each person that Flynn met, saw or interacted with is portrayed with vivid detail and the horror of the day is reflected by them to the audience. According to Cosdon, the aftermath of the crisis and the play relay the same message that has been emphasized during the ongoing global health crisis..

The shows will take place Friday, Sept. 10 through Sunday Sept. 12, with the shows on Friday and Saturday being at 8:00 p.m. and the Sunday show taking place at 2:30 p.m. All shows require audience members to be masked regardless of vaccination status.