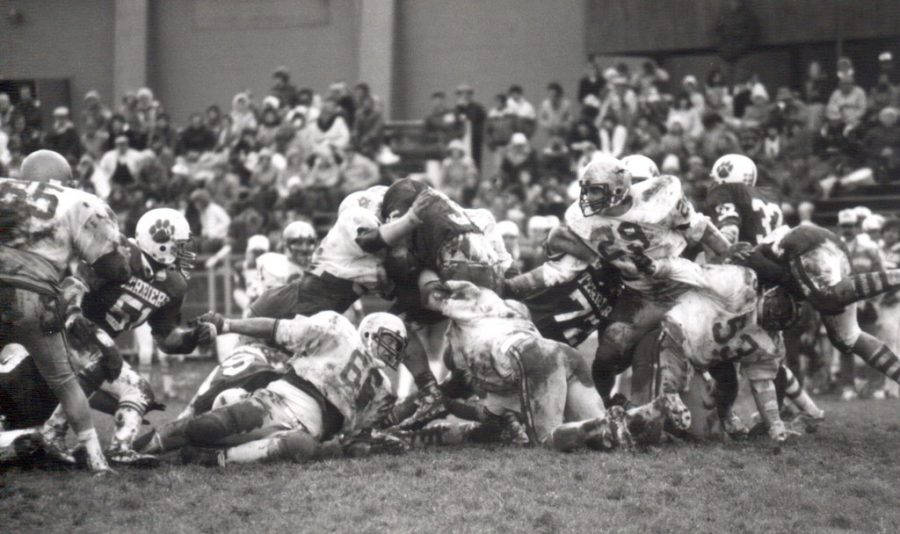 An Allegheny football against Hiram in the PAC from Oct. 5, 1983

A statement from the college noted the primary reason for this decision was the PAC’s commitment to academic achievement for their athletes.

“Moving to the PAC gives our student-athletes more local visibility and support, more time to spend on their studies and co-curricular activities, and more opportunity to achieve success in the classroom and on the field or court,” said Allegheny College President Hillary Link.

Nearly all Allegheny teams will compete in the NCAC throughout the 2021-22 academic year, with the move officially taking place on July 4, 2022. Because of the distance from some schools in the NCAC, this may be the last time Allegheny is able to play their NCAC rivals located in western Ohio and Indiana. The Gator Field Hockey however will remain in the NCAC, as the PAC does not currently sponsor the sport.

“I’m definitely going to miss playing the rivals,” said baseball player Daniel Morgano, ’23. “I’m just more fired up for those games, it’s a different feeling when you are on the field.”

While this switch to the PAC may be an adjustment for Allegheny teams, players seem excited about the prospect of building new rivals. Before the COVID-19 pandemic, Allegheny teams regularly scheduled matchups with colleges from the PAC in the beginning of their seasons, however many Gator athletes have only seen NCAC competition.

“I’m really excited to compete against new schools to see how we perform,” said swimmer Ariana Clark ’23. “And to see how we can perform against them.”

Beyond competition, each school in the PAC is within a 100-mile radius, while Allegheny’s farthest NCAC opponent is over 450 miles away. These trips require early departure times and late arrivals when teams return home.

The shorter bus rides to and from games will allow athletes to be more physically prepared and well rested, contributing to more athletic success.

“The shorter road trips will definitely be nice,” Morgano said. “Being on the bus for two to three hours before the game, there’s so much more to work out, more to stretch, more to prepare and you need to eat more food, so those changes will be nice.”

Beyond athletics, these shorter travel times were a major factor in this decision, as the college hopes that athletes will be able to spend more time in the classroom while in-season.

While competing with closer teams will allow for more time spent on academics for Allegheny student-athletes, the Presidents’ Athletic Conference is also committed to academic success. In the last 15 years, 12,246 PAC athletes have achieved a 3.6 GPA or greater during their season of competition, placing them on the PAC academic honor roll.

“Because we won’t be traveling as far, I think it will allow for more time to do school work,” said volleyball player Cheyenne Wilson ’23. “And it will be nice to not sit on a bus for hours on end.”

Another benefit for the more regional athletic schedule is the prospect of improved support for athletic teams at away games. The college hopes that this will help create a more positive and fun atmosphere for sporting events at Allegheny.

In the statement from the college regarding the move, President Link spoke on this desire for increased support for teams.

“It also connects us with our local community,” Link stated. “Providing increased support for our athletic teams at away competitions by bringing our students and local community members to cheer them on.”

After two years of missed games and regulated athletic schedules because of the pandemic, some athletes will be joining the PAC with only one full season of NCAC experience, so teams hope to capitalize on this chance.11

“There’s definitely going to be some good games this year,” Morgano said.

Until the 2022 school year, Allegheny fans can see their Gators take the field or court as members of the NCAC this year. Football opens on Sept. 4 at 1 p.m. on Frank B. Fuhrer field against Thiel College. The men and women’s tennis team along with the men’s soccer team will also be at Robertson at 1 p.m. on Saturday, each sport taking on Washington and Jefferson College.