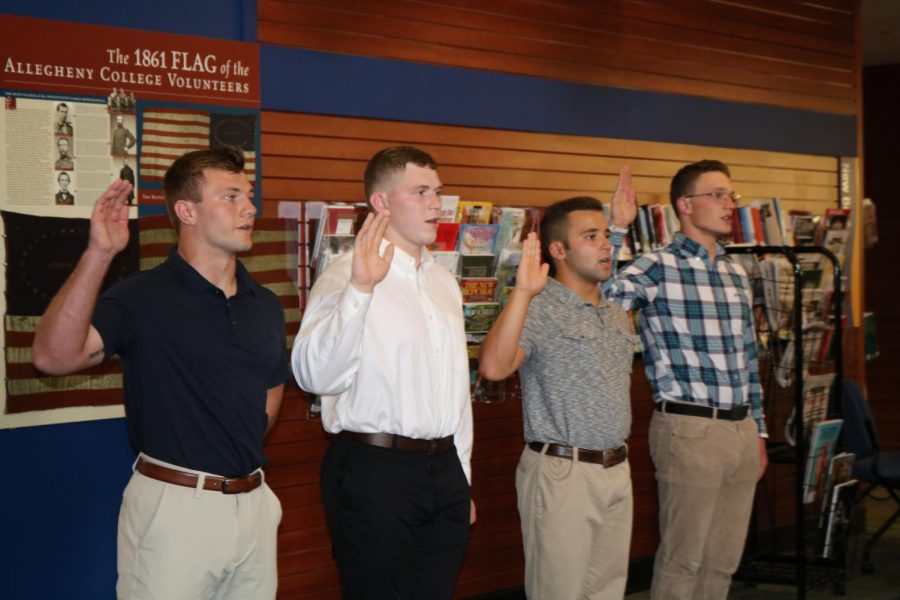 Four Allegheny students took a contracting oath to the U.S. Army on Aug. 27 in the lobby of the Lawrence Lee Pelletier Library. The cadets — Conor Pickett, ’24; Aaron Kosmach, ’25; Kyrie Miller, ’24; and Ethan Junkin, ’24 — made up the largest contracting ceremony ever held at Allegheny College according to Lieutenant Colonel Krug, professor of military science at Edinboro University.

“Some of (the cadets) saw this as an economic opportunity,” Krug said during the ceremony. “Most all of them said they wanted to serve and to lead. They want to become a better version of themselves and part of something larger.”

Krug explained that the cadets have now made an eight-year commitment; that they will serve four years active duty and another four in the inactive reserve.

Pickett explained that the door to military life was opened by his father, but he never felt pressured to pursue it.

“My dad was actually former army, but he never really influenced my decision either way,” Pickett said. “He said, ‘If you want to do the military, that’s great. If you don’t, that’s great. It has to be up to you.’ ”

According to Pickett, the military always interested him, but he only began realizing all the benefits as he got older.

“I’ve met some incredible, high-caliber people in the military, and I just learned about the incredible leadership opportunities that were available,” Pickett said. “Along with that, I’ve found certain ideals that I’m willing to fight for, or at least be a part of a fight for.”

Krug remarked that although part of what the cadets are seeking is betterment, the recruits were held to high standards to make it to this point.

“They had to prove that they were a very good student with great GPAs, great SAT/ACT scores, an athlete in high school and that they had some leadership attributes, which means they were members of their community (and) growing up as a volunteer,” Krug said. “And so with that, we take that all into consideration and we offer them a scholarship.”

Allegheny’s Reserve Officers’ Training Corp program, which was founded 10 years ago, has only recently begun growing according to Krug.

“It started with just one person,” Krug said. “But what we’re realizing is that there’s more of a propensity to serve at Allegheny than we originally thought. Now we have a total of eight people contracted within the Allegheny student population. We have one junior, three sophomores and two (first-years).”

Tom Anderson, enrollment and scholarship officer at Edinboro University, explained that at the time of creation, the Allegheny’s ROTC program’s small size warranted its operating as a branch of Edinboro’s. According to Anderson, Allegheny students who pursue ROTC opportunities dual-enroll at Edinboro, where they supplement their studies with about one ROTC class per semester.

Although there are no plans for the two programs to separate, Anderson remarked that the growing size warrants the beginning of some independence.

“We’re going to try to teach some classes down here,” Anderson said. “(We’ll) conduct our morning physical training sessions with just the Allegheny students so they don’t have to commute to Edinboro as often. They still have to (travel) several times a week, but we’re trying to help that logistic problem and make it easier on the students.”

Anderson expressed gratitude toward the entire Allegheny community for fostering an environment where recruits can thrive.

“The student population here at Allegheny is fantastic, very supportive,” Anderson said. “I’m always impressed with the caliber of students that are here, and the faculty and staff are just as supportive.”

Krug remarked that he is excited to see how the new cadets reap the benefits of ROTC and their schooling.

“I say a lot about ROTC,” Krug said. “It’s an economic opportunity, it’s a leadership opportunity, it’s guaranteed employment afterwards and lastly it’s a great resume builder. So whether these guys serve four or 40 years, it doesn’t matter either way. Their futures look very bright.”

Correction: a previous version of this article incorretly referred to the contracting oath as the oath of enlistment. The article has been updated to correct the error.