Tennis teams wrap up their 2021 season against Kenyon 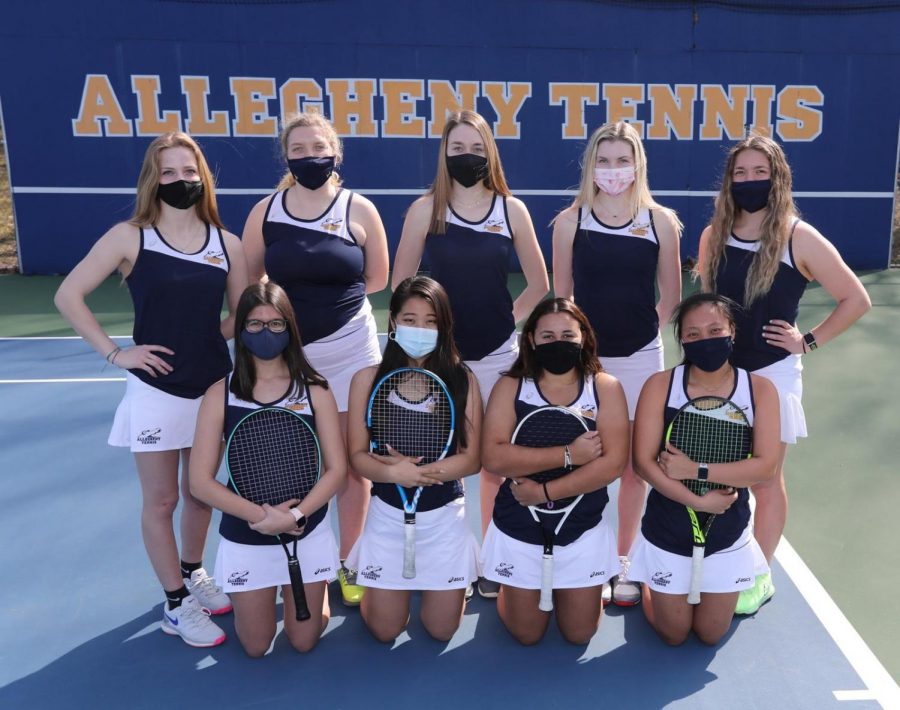 The Allegheny men’s and women’s tennis teams wrapped up their seasons last Friday, each falling to 13th ranked Kenyon 9-0 in their final NCAC matches of the year. The men finished the season with a record of 0-8 while the women finished 3-4.

Despite their losing records, however, the teams were able to make the most of the limited competition, playing against schools that they do not usually compete with, including Denison — who the Gators have not played in over three years.

The teams emphasized their excitement to just return to play as the prospect of having a season seemed unlikely in the fall. In a time without COVID-19 protocols in place, the Gator tennis teams would play upwards of 20 matches throughout the year, with an abbreviated season in the fall followed by their full in-conference spring season. This past fall, the Gators were unable to compete in matches, instead they held practices.

“Going into it we weren’t sure if all of our spring matches were going to work out, but luckily we ended up having a total of (eight) matches,” Fabrizzio Reategui, ’22, said. “Most of them were schools in our conference and only a few were outside.”

Completing her first full, albeit shortened, season is Head Coach Taylor Coffman, who was named head coach in August 2019 after joining the staff as an assistant in 2018. As the head coach for both the men’s and women’s teams, Coffman started her career at Allegheny with a 4-0 record for the men and a 5-0 record for the women in the fall of the 2020 academic year.

Although the success from the beginning of last year was not able to follow the Gators into their short season, Coffman suggests that this season was a learning experience for each team more than anything, and will prepare them for seasons to come.

“I would say that this was a season of learning,” Coffman said. “It was not how we wanted it to go, however I think that we got to see the level (of competition) across the conference which is really good.”

Three out of six of the Gators opponents this year were ranked in the top 25 of the country, with Carnegie Mellon and Kenyon each being ranked in the top 15 to end their seasons. Seeing the highest level of national competition can only help the Allegheny tennis teams in their pursuit next season as the teams can now begin to hold a higher standard.

The underclassmen on each team were also able to see the competition in their conference for the first time, which could be crucial to success in the future. Because of their lack of college match experience, the learning curve for these younger players is a little bit higher and the tough matchups this year helped these players learn quicker.

“Overall, I was really satisfied and really happy we got to play in general,” Katherine Stancil, ’23, said. “It’s my first season because I am a sophomore and we didn’t really get to play last year so it was really exciting.”

Although a full season has not yet been confirmed for next year, the Gators are planning to prepare for a full season. Coffman is hopeful that her players will build off of their tough condensed season and train hard in the off-season to ensure that they are ready during the fall.

Each team graduated two key players as the men’s team lost Aden Salim, ’21, and Mackenzie Knowlton, ’21, while the women’s team will be without Gaby DeLeon, ’21, and Gretchen Norton, ’21, next season. However the Gators are hopeful that their experience from this season, along with their new recruits will bode well for next season. The players are also excited about the energy of the team heading into next season.

“I’ve definitely seen a lot of discipline and motivation from the team, more so than I’ve seen in maybe two years,” Reategui said. “And I think we’re starting to tap into our potential and we’ll see how everyone trains over the summer, but I’m really liking how it’s looking for next fall.”

With this extra motivation, the Gators look to come back next year when they plan to host the Nancy and Harvey Heath Gator Invitational to kick off next fall’s season. In the meantime, the team seems to understand the work that they must put in order to bounce back from a learning season.

“To prepare we’re encouraging our players to play tennis matches where they can because drills are one thing but playing an actual match there are so many emotions and hormones and adrenaline running through your veins,” Coffman said. “But making sure that they are actually competing this summer and getting ready to play these matches is the biggest thing that we are doing to prepare.”