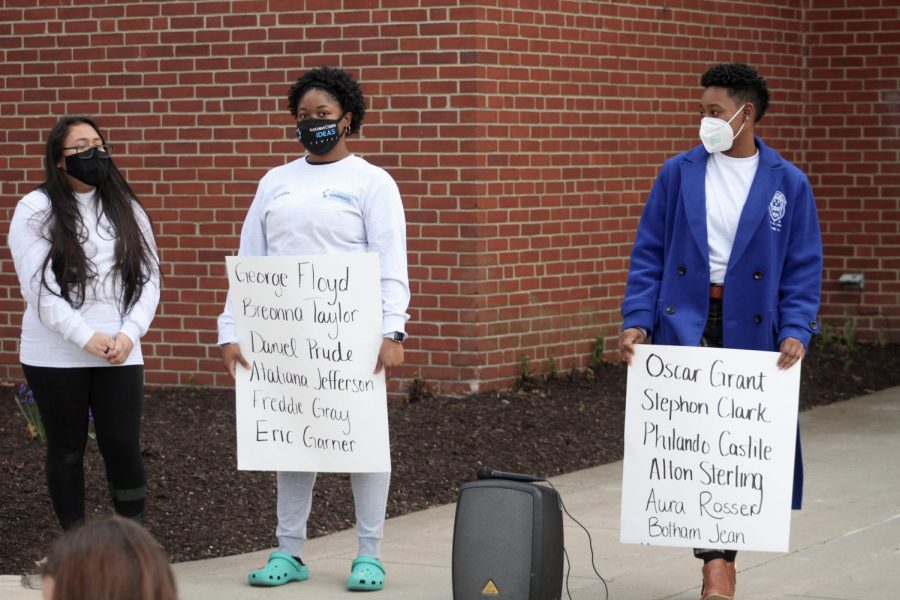 On Friday, April 23, the Intercultural Advocates of the Inclusion, Diversity, Equity, Access and Social Justice Center hosted a “Vigil for George Floyd,” for students to remember Floyd and all victims of police brutality. It followed a series of student vigils for Breonna Taylor and the victims of the spa shooting in Atlanta, who were primarily Asian-American and Pacific Islanders.

The event was the most recent of three hosted following the April 20 conviction of Derek Chauvin for the 2020 murder of George Floyd. On April 21, the Schultz East Alcove hosted a “Healing Space” for community members to share their post-trial feelings. The following day, April 22, the advocates held a “Candid Conversation” in the Tillotson Room of the Tippie Alumni Center between the administration and students.

Unlike previous vigils, the event did not open with the organizers addressing the crowd. Instead, Intercultural Advocate Maya Francisco, ’24, thanked people for attending and left the microphone open for anyone to express their feelings following the trial.

“We wanted to honor the lives (of victims of police brutality) and give a space for us to come together to share support and acknowledge current events,” Francisco said to the crowd.

At the beginning of the event, that crowd numbered no more than two dozen and stood mostly in silence, but after music began to play things began to loosen up.

“Initially, it was pretty standstill, I’d like to say, but like I said we wanted this to be a space for students to come and get to know each other and as the music started playing and people started talking it created this atmosphere that made people more comfortable to talk,” said Intercultural Advocate Aaliyah Coleman, ’21. “I don’t try to harp on numbers a lot because I know that if I reach one person, that one person can go communicate with somebody else, and then that train keeps on going with hopefully the same message that started it.”

Coleman stressed the importance of having professors attend vigils like this one, to help educate the educators.

“If we have a professor here, they may go and talk to their class about it on Monday and talk about what they learned and the environment there,” Coleman said. “We need more professors here in order to reach more students.”

Another Intercultural Advocate, Rosslin Watson, ’21, sees the work of the advocates as focused on intra-institutional connections.

“Our biggest thing is trying to build those bridges between students, faculty and the administration,” Watson said.

The last of the three groups Watson mentioned — the administration — was well-represented at the vigil, unlike previous events. A vigil held last semester for Breonna Taylor lacked any administrative presence, and students found the overall administrative response lacking.

The Intercultural Advocates themselves were key in setting up the series of events, their first this semester. The group, a self-described “extension of the IDEAS Center,” was launched at the beginning of this academic year as a response team for incidents of bias or discrimination against the college’s marginalized communities.

“We’re in the fundamental stages, but for us to put something together so quickly, I was just really proud of the work that the Intercultural Advocates put in just this week alone,” Coleman said.

Beyond the vigil, Patton-Johnson said that the previous two events hosted Intercultural Advocates helped add to the safety of the community.

“I saw (the events) from afar and I just thought that it was just nice because it’s showing how Allegheny is trying to be socially-aware, which I feel like not a lot of campuses do,” Patton-Johnson said.

Watson sees the support of the community as vital, but that action is still needed for fundamental change.

“I think (the attendance) speaks volumes,” Watson said. “We invited President Link, and she took time out of her day to come. I think it says a lot that people are actually making time to show up to these events, but now it’s time for the action that comes in behind it.”

Coleman noted that though the Black community has grown since her arrival as a first-year student, simply having more people of color does not solve the fundamental problems.

“Ultimately you can bring as many Black people here as you want, but if you don’t have the resources to support them, you’re just setting them up to fail,” Coleman said. “It’s important for the institution itself to, for one, hire more professors of color, so students of color can see themselves in their professors (and) feel comfortable addressing their professors. I feel like that’s important because at the end of the day we are still students trying to obtain an education.”

Despite the conviction of Chauvin, Patton-Johnson said the process of justice is far from over, and still has concerns about him escaping his verdict.

“I am nervous about what goes along with the case, because even though he was convicted and guilty of all charges, we don’t know how long he’s actually going to be in prison,” Patton-Johnson said. “There could be a chance that he could be on probation early, this is (his) first case (and the judge is more lenient), and they might consider it a mistrial because of all the bad things that people are saying about him so he didn’t necessarily get a ‘fair trial.’”

Even if Chauvin’s verdict stands and he receives a heavy sentence, Watson noted the systemic issues remain.

“Yes, George Floyd was the face of this large enhancement of the Black Lives Matter movement, but there are many other people who have been victims of police brutality and we wanted to shed light on that,” Watson said. “There’s more than just one Black man who was a victim.”

Still, Watson believes that the vigil and its surrounding events served their purpose in giving the community a place to heal.

“I do hope that this space has allowed some students and faculty who have shown up — I hope it gave them something, some insight to know that you don’t have to go through this alone,” Watson said.