Associate professor of economics to retire after 30 years 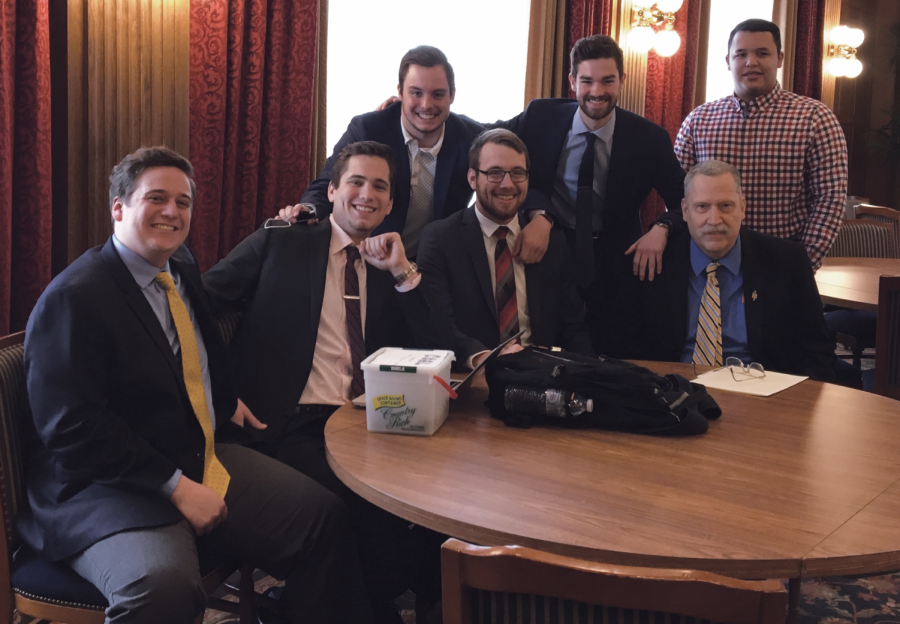 Associate Professor of Economics John Golden’s office is rather bland from his laptop’s perspective — a filing cabinet and bookshelf the only things covering white walls. With no defining features, it could have been anybody’s office, which is why it was not surprising when Golden made it immediately clear that he, as the subject of the interview, would delay talking about himself as long as possible.

Golden will retire at the end of the semester after spending most of his 30-year career at Allegheny College.

Allison came to Allegheny to expand the amount and variety of entrepreneurship classes in 2006, when Golden was the sole entrepreneurship teacher, and the two have been teaching together ever since. Allison has since come to refer to Golden as “the hardest working man in showbusiness” — a reference to funk artist and singer James Brown and acknowledgement of Golden’s intense work ethic.

“I mean, he just really cares,” Allison said. “He gets so invested in the success or the lack of success with his students that he gets very emotional. He just wants them to do well, and he makes a big effort to keep in touch with our students. He remembers all of them.”

According to Allison, Golden takes the blame when any of his students are not doing well, and credits their hard work when they excel.

“The joke is that you walk by his office at 10 p.m. and he’s sitting in there working with students,” Allison said.

“Occasionally, when I step into the building during the late hours, I will see John in a classroom around 9 p.m. teaching three or four students, trying to tutor them or help them out,” Onyeiwu said. “His office is open virtually 24 hours. I mean it, I’m not kidding.”

Although he has taught at Allegheny for almost 30 years, Golden was never tenured according to Allison.

“John acts like he’s a first year faculty member really trying to prove himself is his value, and he’s done that for ever since he’s been there,” Allison said. “He just is really focused on delivering value to the school.”

Allison said he is impressed by Golden’s wide breadth of knowledge — especially of economics — and suggested that not only should Golden be on Jeopardy, but should host it.

“John lives, eats and breathes economics,” Allison said. “I always joke with him, I could wake him up at three o’clock in the morning with a phone call and ask him what GDP growth was from 1968 to 69 and he could probably tell you.”

Onyeiwu expressed similar amazement by Golden’s attention to history, economics, finance and other fields.“You run into John Golden, the first thing he tells you is whether the market is down,” Onyeiwu said. “So you say, ‘Hi, John,’ and it’s all, ‘The Dow Jones fell by this number of points.’ And then later in the afternoon, he updates you. He’ll say, ‘The market, came back again. It’s doing well.’ He will tell you all the major stock market crashes in the US and what caused them. He saw the crash of 1987, the crash of the 1930s.”

Golden attributed his expansive knowledge to the unique variety of courses he had the opportunity to teach, in addition to the unique student body.

“Each class brings new experiences, new backgrounds, new ways of thinking — it brings a whole different set of questions that get raised,” Golden said. “Often the college will say ‘we have interesting combinations’ and we certainly do. I’ve taught intro macro and micro economics, and intermediate level also. I’ve taught economic history, I’ve taught a history course in (the) LGBT minor we had some years back, which is an unusual option for somebody in an economics program.”

Golden explained that part of his need to help students whenever stemmed from his time as a teaching assistant at the University of Connecticut.

“We were told that one has to think about one’s students, and you have to remember you’ve got an obligation to your students,” Golden said. “We’d gotten lost coming back from Cape Cod. We didn’t have cell phones at the time, and I was late for a review — I had like 35 signatures saying ‘we were here a half hour for you’ or whatever. And ever since that experience, I never wanted that to happen again.”

One of the best parts about working in the classroom is the spontaneity it brings according to Golden, though he said he tries to keep scheduled classes more on-track. Students who attend his late-night study sessions on the other hand are presented the opportunity to discover more unique aspects of his personality.

“I try to do the things I enjoy, and I used to think I did a pretty good Elvis — an elder Elvis who forgets lyrics and what have you,” Golden said.

Although Golden said his signing and other habits were mostly after-hours activities, Allison suggested otherwise.

“John’ll go into class and he’ll just sing songs and everything,” Allison said. “He likes singing Frank Sinatra. But let me put it this way, Frank Sinatra’s place in society is not in trouble. I think Frank’s going to be okay.”

Such an outpouring of gratitude has come out for Golden that it is physically incapable of fitting within the confines of this article.

Onyeuwi chuckled while explaining that the Quigley vending machine will probably go out of business without Golden around to buy Coca-Cola.

Mary Nagel, ’15, explained that Golden was the only professor to have taught herself and her three siblings, and is grateful for his support through competitions she took part in at Allegheny.

Shivanthi Gunasekera, ’93, said her introduction to Starburst in Golden’s study sessions has turned into a lifelong addiction, and that his teaching was inspiring to her 25 years ago and to her nephew, a 2019 alumnus.

Golden explained that retiring now provided him the opportunity to “lock in a few good years,” but said Allegheny was so attractive that he would probably continue teaching a few courses.

“That’s the kind of guy he is: extremely valuable, extremely friendly, a very, very kind person, a nice human being,” Onyeiwu said. “And so he’s going to be. Missed by students, by faculty, by staff.”