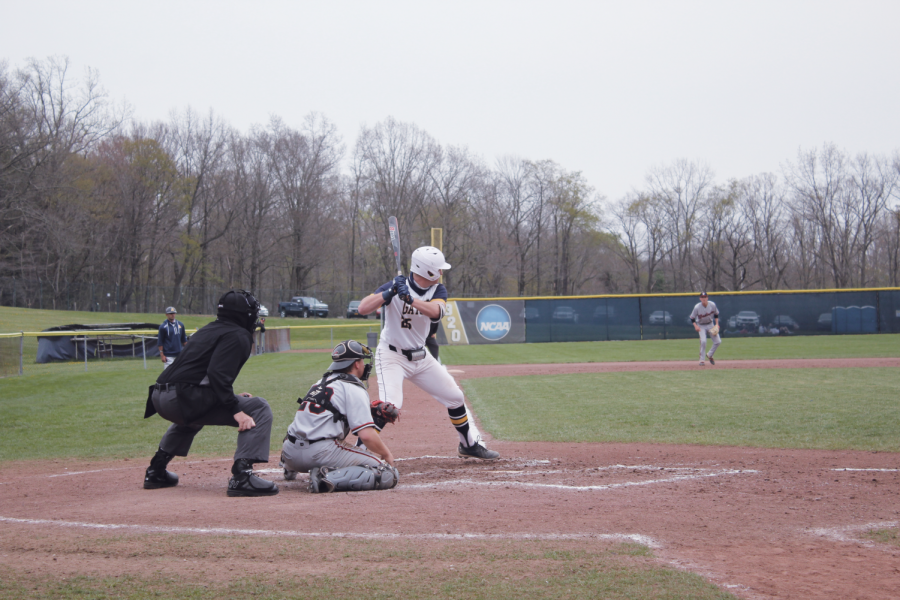 The Allegheny Gators baseball team entered the 2021 season trying to build off last year’s success. Although every sports team was forced to end their season early last March because of the pandemic, the Gators were in the midst of a five-game winning streak before being sent home. Many senior student athletes such as ace Sean Kealey, ’20, and speedy centerfielder Bret Kelly, ’20, were an instrumental part of the team’s success. They were unable to finish their swan song on what appeared to be a guaranteed playoff run.

Of course, senior players leave, first-year players start their careers and the team readjusts every year at the collegiate level. Yet the 2021 Gators rely significantly on their underclassmen, more so than other Division III colleges, as 25 of the 38 players on the roster are first-year and second-year student athletes.

D3 baseball teams play around 40 games a season, and Allegheny only competed in seven games last year. First-years on any sports teams need to prove themselves at the collegiate level and typically earn more playing time as the season progresses. This year, underclassmen were forced to  step  up with limited collegiate experience.

The Gators have made a near seamless transition to the shortened 2021 season, currently sporting a 12-7 record overall, and are 6-4 in conference play. Many second-year players and several first-year players have become regular contributors to an already talented roster.

One of these players, Conor Deasy, ’23, is a Pittsburgh native who has solidified himself as the new ace of the rotation. He became the first Allegheny pitcher in nearly five years to throw a seven-inning shutout after earning a complete game victory against Hiram on April 15. Deasy then followed up with yet another seven-inning shutout against Kenyon on April 22, which earned him NCAC Pitcher of the Week honors.

Head Coach Brandon Crum envisioned Deasy becoming the ace of the rotation, but did not expect how much he would improve upon his first-year campaign.

“I didn’t know Deasy would make the jump he made,” Crum said. “Last year he threw in the low-mid 80s, and now he throws in the upper 80s and lower 90s. He’s got a repaired shoulder and he plays through some bumps and bruises, but his ability to pitch has really impressed me.”

Deasy missed the opportunity to start the Gators opening game against Penn State Behrend because of back discomfort. Since then, Deasy has been healthy on the mound and credits the team’s defense for backing him up and aiding the team throughout the season.

“It took a while to get it sorted out, but I am finally feeling really good now,” Deasy said. “Last game, I didn’t have many strikeouts, but the defense was making plays, doing a great job, and our success would not be possible without them.”

One of the players that has contributed to the Gators’ impenetrable defense is Ryan Dougherty, ’24. Dougherty has not committed any errors in his first year with the team, and made a near flawless transition to centerfield after being a middle infielder and corner outfielder in high school. Dougherty is also the only first-year position player to be rewarded with consistent playing time, as he has started in 17 of the 19 games the Gators have played this season.

Crum remarked on Dougherty’s offensive capabilities as well as his resolve to grow as a baseball player.

“We knew he could hit,” Crum said. “He’s a threat on the basepaths, he can really run. What I like about (Dougherty) and what keeps him going is that he is a learner. He will have at-bats where he flies out or grounds out, but the third time around he knows what that pitcher is doing. He is going to be a player we build the program around.”

Dougherty continues to improve offensively for the Gators. This past week, the Gators went 3-3 against Hiram and Ohio Wesleyan. Despite the offense being somewhat lackluster, Dougherty crushed his first two homers in a Gators uniform. Dougherty feels grateful that he is a part of a powerful Allegheny lineup.

“Hitting with people like Brett Heckert (’22), and Luke Chutko (’21) is an honor,” Dougherty said. “Those two are really holding it down in our lineup and it feels really good being a part of that.”

Looking toward upperclassmen for inspiration and advice is a common occurrence in Allegheny’s baseball program. For example, Nolan Thompson, ’22, has taken Brent Herrmann, ’24, under his wing. The two pitchers are the only southpaws on the team.

“It’s been a fun experience playing with Brent,” Thompson said. “He really wants to learn and gives a lot of effort, so it’s been fun trying to bring him along and teach him the ropes.”

Thompson has excelled as the Gators number two starter in 2021. In only 90 pitches, he tossed a 7-inning complete game victory for Allegheny in the second game of the April 22 doubleheader against Kenyon. Thompson’s performance against Kenyon as well as his breakout season is thanks to his refined command of the strike zone.

“Nolan has made some significant adjustments in the last couple years,” Crum said. “If you gave Nolan the ball for three innings, he’ll do well but he will throw everyone four to six pitches. Now he gets hitters out in three pitches or less.”

Conor Deasy and Nolan Thompson are expected to start the two games on the road against Wooster tomorrow at 1 p.m. The Gators hope to wrap up their final ten games of the season on a high note en route to their third consecutive winning season.