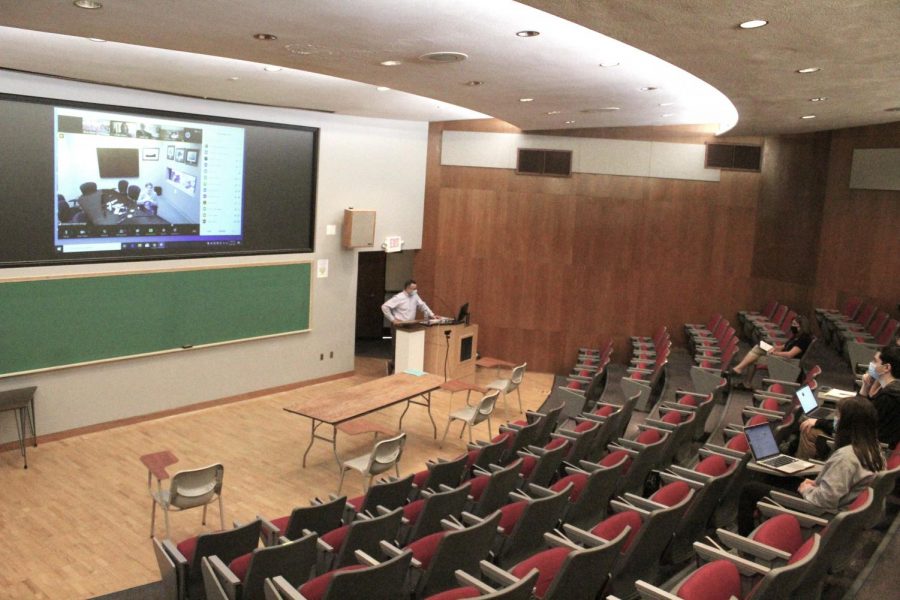 Professor Chris Allison teaches his ECON 380 class, “Entrepreneurship II.” Competing in the competition is required for the class

On May 8, the Bruce R. Thompson Center for Business and Economics will be hosting the finals for the Zingale Big Idea competition. The roughly seven-hour competition will take place virtually for the first time in its 14-year history, after the 2020 competition was cancelled due to the COVID-19 pandemic. Described as “Shark Tank with a heart,” the program trains students to produce a business plan and pitch it to investors — in this case, a panel of judges that evaluate their proposal and provide feedback. Overall, $20,000 in prize money is given every year, and the 2019 winner Christian “Dubs” Walker went on to turn his idea into a fully functional business.

Chris Allison, entrepreneur-in-residence and co-director of the Thompson Center, said that unlike Shark Tank and other traditional business shows, for-profit businesses are not the only ones competing for funding.

“We open it up to not only for-profit businesses — regular entrepreneurship — but social purpose ventures, non-profit ventures and activism and awareness programs can compete in the competition,” Allison said. “Many of our winners were not business students. For example, the last time we held the competition one of our winners was a studio art major, and she developed an iPad application for people with memory impairment illnesses such as Alzheimers and dementia.”

The competition is loosely tied to the ECON 380 course, “Entrepreneurship II”, which focuses on financing a small business. Jordan Wilson, ’21, a computer science major, said that this class helped set him up to compete.

“This class (Entrepreneurship II) helped a lot with how I should look at things from a business standpoint,” Wilson said.

“Security is important involving any sort of business,” Wilson said. “If your customers can’t trust giving their information to you, then you essentially don’t have a business. Smaller companies are also at a disadvantage because they don’t have the money or resources to actually put in place security protocols.”

Allison has also set up an alternative path for students who are interested in competing but are not taking ECON 380.

“Participation in this competition is one of the class requirements for our Entrepreneurship II class, but students across campus compete to prepare them,” Allison said. “I hold a series of workshops where I teach them how to identify a problem and a business idea — how you develop it and how you present it.”

That is one reason Christian Lussier, ’21, is enjoying the competition.

“It’s like an independent study in a way because he gives you all the information you need to come up with a good idea, and then you actually have to take that idea and run with it,” Lussier said. “You have to develop it on your own a lot. It’s been good in terms of working on my critical thinking skills and that sort of thing.”

Though the project has taken a lot of work, Atlas Besenfelder, ’21, Lussier’s partner in the project, used it as a way to relax after working on schoolwork and his senior composition.

“I’ve been comping this semester just like every other senior, so for me it’s been an escape,” Besenfelder said. “This is something where we’ll come work for a couple hours in a session and it’ll be nice to think about something that isn’t your comp. For me, I’m very low-stress when it comes to this, because it’s really whatever we make of it.”

Besenfelder and Lussier’s project was born out of Besenfelder’s work at a local beer distributor.

“Every single week, I had to turn multiple people away who’d either be drinking while driving or obviously impaired while pulling up to the beer distributor,” Besenfelder said. “That just made me think: I’m only getting a small sample size of the general population of people doing that within the area, so that made me start thinking — when alcohol delivery came up — maybe this can really start to reduce impaired drivers and become a benefit for public safety.”

Beyond the program, Besenfelder and Lussier hope to use what they’ve learned to actually create the business itself.

“Hopefully we do well in the competition, but even if we don’t win the thing we are still interested in pursuing this idea after (graduation),” Lussier said. “We already thought it was a good idea and it seems even more viable now.”

Wilson, too, has been working on his project after graduation as one option on the table.

“My comp is also centered around this kind of idea so it’s definitely possible,” Wilson said. “It’s a possibility.”

That sort of imminent practicality is what Allison said the judges are looking for.

“They want to know, can you actually do it?” Allison said. “In some cases they’ve had prototypes …  We had one student that had a delivery business for Allegheny students where you could send him a text message and he would bring over a snack bag … He was actually making money on that, and when he won (the competition) he said to the judges, ‘I apologize if I look bleary-eyed but I was making deliveries until 2 a.m. last night.’”

The 2019 winner, Christian Walker, created a brand of anime-inspired street apparel called “ani-matr,” designed to redefine societal expectations of the genre. His brand is still operating to this day as a fully functional business, and has a 19-and-a-half thousand strong following on Instagram.

“Especially when I was in high school, they had anime clothing and anime aesthetics, but it was a bit loud and not minimalistic,” Walker said. “What I did was I found a way to create anime-aesthetic designs that all audiences could appreciate regardless of if you know what anime is or not.”

Walker said that the brand helped him weather the effects of the COVID-19 pandemic.

“Because of COVID, unfortunately, I lost the job that I originally was going to have — I was going to be doing digital marketing,” Walker said. “It was a blessing in disguise, because I ended up staying home and I got to stay at home and spend more time with my family and it allowed me to really focus on my brand and push it to the point where if I want to move to New York or Pittsburgh and then just work on my brand, I can afford to do that.”

Walker competed for three years in the Zingale Big Idea competition, winning it in his last outing as a junior. His first year, he created a cybersecurity platform with a friend, and lost in the finals. The second year, he entered with the ani-matr brand but lost again.

“It left a bad taste in my mouth,” Walker said.

Instead of focusing on winning the competition for the competition’s sake, Walker decided to use it to prove to himself that he had built a successful business. By his junior year, he had increased the brand’s following sevenfold and won with the partnership of Natalie Buzchek’s and Christopher Miller’s ‘Aid Memoir.’

“The Zingale Big Idea Competition is a fruit of the labor and time you put into your business or endeavor,” Walker wrote in an email. “The competition shows how you respond to criticism and make effective adjustments. If you don’t win the competition, then that’s fine as long as you put your best foot forward. The validation of your endeavor should come from the growth you’ve made with it and how you learned as a person. The validation should come from finishing the business plan, or PowerPoint and being proud that you’ve accomplished that.”

One of the reasons, Allison thinks, for such a broad array of winning majors is Allegheny’s nature as a liberal arts school.

“My mom used to say if you can read, you can cook, (because) you can get a recipe,” Allison said. “If you look at the skills of a liberal arts student it’s the ability to assimilate a lot of information, to analyze, to communicate and give presentations. I absolutely believe that studying English helped me as a business person because in my view, studying literary fiction is looking for patterns and motivations. New product discovery and understanding customers’ wants and needs, it’s the same thing.”

Besenfelder attributes the program’s success to the professor who teaches it all: Allison himself.

“Even after having just one class with Professor Allison, you can realize just how bright of a person he is and how good of a person he is,” Besenfelder said. “It was just good to take a class in my last semester with someone like that and then when I found out Christian was taking the course as well, for me it was a no brainer. It was the first thing I registered for.”

Allison, for his part, credited John Golden, who will be retiring from Allegheny at the end of the semester after spending 30 years at the college. Though Golden will no longer be teaching, he will still remain a judge for the competition.

“He and I were basically the entrepreneurship team in the department,” Allison said. “He’s a great guy and everyone loves him and all the students (love) Professor Golden. It’s a really special competition now because it’s going to be his last one as a professor.”