How seniors are ‘chomping’ the comp 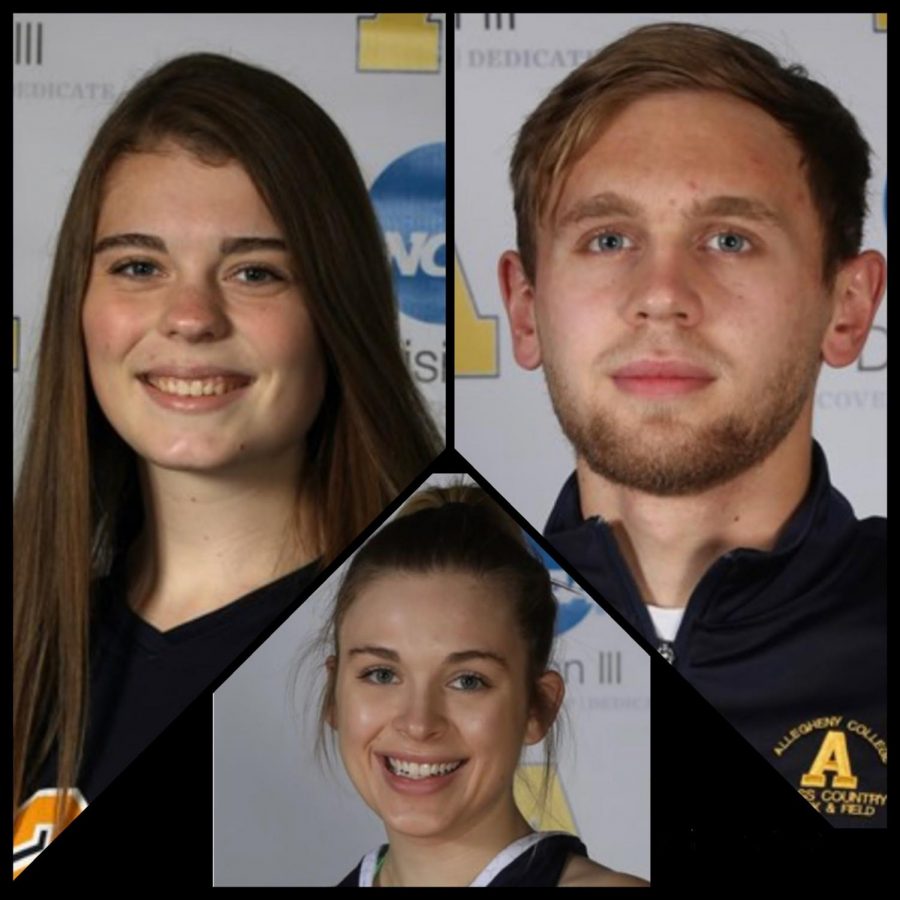 The senior comprehensive project is a staple of an Allegheny education. Students dedicate a large portion of their senior year to various types of independent projects based on their areas of study.

The result of this work is a defense of it at year’s end and a piece of published work that students will take with them as they leave college for the workforce or graduate school.

While the premise of the senior project can be summarized briefly, the array of student topics are much more complex.

“I’m looking at pseudosuchians, which are ancient crocodiles and alligators from the Mesozoic era when the dinosaurs were alive,” geology major Shannon McGuinn, ’21, said. “I’m looking at their feeding ecology and seeing if it affected where they lived during that time. It’s been so much fun and I love it.”

When it comes to studying prehistoric life while located in Meadville, PA, research relies heavily on online resources.

“I use this database called the Paleobiology Database and I typed in pseudosuchians and downloaded all their data onto a spreadsheet from the Mesozoic era,” McGuinn said. “I found that continental movements during that time affected their migration.”

While some comping seniors have their eyes on databases, others have their fingerprints all over their project.

“My project was a little non-traditional; most students on campus do research but I chose not to,” physics major Austin Shaw, ’21, said. “My goal was to get to a research standpoint but I’m more of a hands-on person. I focused on improving the radio telescope outside of Carr Hall because it wasn’t really reliable and we were getting inconsistent results from it.”

The project proved to have its difficulties as no one in the area worked with the type of cable wire that Shaw was using. Ultimately, challenges ended up turning to successes beyond simply fixing the telescope.

“I actually found out the reason why the telescope didn’t completely work before,” Shaw said. “It was because the wire type that we were using wasn’t set up properly which was why we were getting inconsistent results sometimes.”

While seniors dealt with their projects, the world was dealing with COVID-19. This added an extra wrinkle due to certain restrictions.

“In the fall semester I feel like I could have dedicated more time to my project,” Shaw said. “The only time I could work on it in the lab was during the class day since the academic buildings weren’t open on weekends or after hours because of the pandemic so that was very difficult.”

With or without COVID-19, challenges are bound to take shape in many different forms for each senior project. While some students are in search of expertise regarding certain cable wires or open academic buildings, others seek out help to deal with entirely different barriers.

“I’m working with an international region in Jakarta, Indonesia, so I think the biggest challenge is the language barrier,” global health major Mari Casale, ’21, said. “A lot of times the data or papers I’m looking at are written in Indonesian which I obviously don’t speak so translating that is tough and translations aren’t always perfect.”

Beyond language, Casale has been faced with other challenges that come along with researching a foreign region.

“The professors here don’t do work in Indonesian so they aren’t very knowledgeable about that region which makes acquiring my data kind of difficult. I had to reach out to a lot of people who worked in that area and sometimes people didn’t get back to me so I’d have to re-adjust.”

Despite facing some challenges that professors were unable to quell, Casale received vital help from her comp advisor.

“Just having that one-on-one time with someone who’s solely focusing on you and gives you good feedback is really nice to hear because a lot of the time I’ll be writing something and don’t think it’s good,” Casale said. “It really is an independent research project and it’s just based on you. It can be tough because you don’t really have anything to compare it to or go off of “Having friends nearby just to help mentally even though they couldn’t help me with the project really helped to ease the stress,” Shaw said. “In my case, just taking a break and walking away for awhile when I had pent up anger and frustration helped me come back with a fresh mind.”

Shaw explained that theDespite the stresses that often need relieved while comping, there are plentifuly of rewarding experiences along the way to counteract the challenges and stress which come with comping.

“If you’ve found something that you’re really interested in and motivated about and that’s your topic for your senior project then you’ll be successful and find that it’s a rewarding process,” Shaw said. “I want to go into electrical engineering and so even when I was frustrated on some days, I found myself being content with the project not being done because I wanted to be back there again and again spend as much time as I could on the project once I got to the point where I was doing electrical stuff. It made me realize I wanted to learn more than what I used in the project because it was basic electrical stuff, but I really want to get into the nitty gritty of it later.” Though seniors dedicate much of their time to their comps, they still have other academic responsibilities. The way in which seniors are able to manage their time as they juggle their comp with classes has a lot to do with their class workload.

“My comp was two semesters and six credits but you could pick if you wanted to do two then four or four then two,” McGuinn said. “I picked to do two then four. Since I only needed 12 credits this semester I only had two other classes and that made my workload really manageable.”

However, others are faced with less ideal class schedule situations based on their major department’s policies.

“This is where I might have some backlash about the physics department,” Shaw said. “From what I’ve heard, (economics) and environmental studies comps go shorter than us or just as long in the spring but they get eight credits total. We get six credits total and it’s broken up as three and three so one of the semesters you have to add a two credit class to make up for those last two credits which is kind of difficult throwing into the mix.”

Managing class schedules is very important for comping seniors but there are also other factors that are equally important to manage as well.

“I think managing your expectations that this is an undergraduate level thesis is important because there’s always going to be more work you could put in to make it better, but you don’t have the time or money or resources to do that,” Casale said.”

Just as the topics, research and class workloads all vary for comping seniors, so do their experiences with the project.

“I had a really good experience with my comp advisor, but I have some friends who wouldn’t say the same,” McGuinn said. “I think more organization would be very helpful for the students because you’re kind of on your own for the whole thing and if you have good guidance it’s not that bad, but figuring it all out on your own is a lot harder to do.”

In light of the ups and downs that come with the senior project, Allegheny students benefit are benefited with  from an important resume feature and piece of published work.

“I’ve been looking at jobs and grad school and stuff and just having this piece of research has set me apart from other applicants,” name said.. “It’s been annoying at some points where I really don’t want to comp and want it off of my plate, but none of my other friends I graduated from high school with have done something like this so it’s cool.”