Swim and Dive competes in only meet of the season 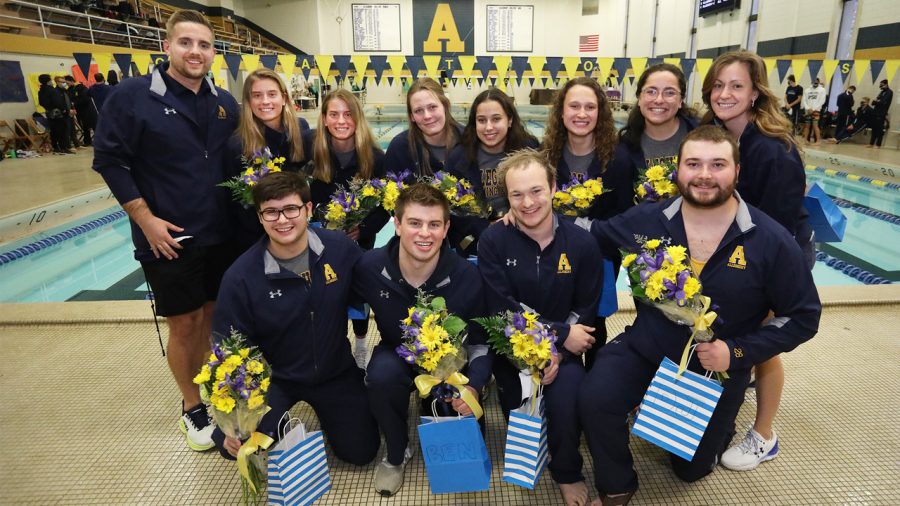 The Allegheny men’s and women’s swimming and diving teams returned to action last weekend against Penn State Behrend in what was their first and only meet of the season. The meet also served as senior night for the 11 seniors.

The men’s team was defeated by the Lions 473-283, however they picked up 13 wins. Pierre Jaeggi, ’23 capped off the meet with three first-place finishes, whereas Hunter Pietrzycki, ’21, won both diving events in his final meet at Mellon Pool. The women’s team won 16 events en route to a 487-245 win over Penn State Behrend. Anna and Aimee Verardi, ’21, each placed first in their own events as well as placing first together in the 200 medley relay, while Chelsea Pietrzycki, ’21, won both of the diving events of the meet.

“On meet day, it was unbelievable to see just how positive and energetic everyone was,” Megan Corletti, ’21, said. “I really think that came from a place of honesty, with just being excited to be on deck with another team, competing, and kind of seeing what we can do.”

Upon returning to campus for the spring semester, members of the swimming and diving teams were hopeful to return to competition, however no plans were set in stone. Nevertheless, the teams maneuvered through COVID-19 policies, as well as a broken pool heater that needed repairs, in order to host the meet against Penn State Behrend.

“Everyone was just excited to get back in, and there were a lot of seniors that hadn’t swam and only a week before they came back so they could swim in the final meet,” Daniel Logue, ’23, said. “Everybody was just happy to get back to racing.”

The Gators are hoping to build upon this meet next year. There will be a heavy reliance on underclassmen, as the program has 20 first-years and sophomores among both teams.

Although the season only lasted one meet, the teams are poised for next year and excited for their incoming recruits to get a full season under their belts. They are hopeful that policies and regulations around COVID-19 will loosen, both teams are planning for a full season next year.

“We’re going to be a very good and competitive team next year,” Logue said. “We need to be ready because we’re going to have some really fast recruits coming in and we are going to be doing a lot of fast swimming next year.”

The seniors also indicated their excitement for the first and second-year members of the program, however they were more concerned with enjoying their final meet as a Gator.

“I know that a lot of the seniors in my class came into this year with not the highest of expectations, thinking that conferences last year would be the end of our swimming career,” Benjamin Blackburn, ’21, said. “So it was really nice to have one more time back in the pool, competing.”

This year, because of the scheduling restrictions, the Gators were able to hold a senior day at Mellon Pool which gave the swimmers and divers a more recognizable setting for their final send off.

“This one became a little more intimate because it was at home,” Corletti said. “It was just a bit bittersweet that I got to compete for the last time at the pool I’ve been training at six days a week for four years.”

Competing at home in their final match seemed to fuel the senior swimmers and divers as they gathered seven first place finishes among both teams as well as 12 top three finishes. Nevertheless the seniors were excited to be with their teammates and enjoy the experience of the meet.

“The meet was mostly for me about being with the members of my team, and being with my class one more time,” Blackburn said. “Just competing for the fun of it.”