Reducing stress and bringing smiles, one donut at a time 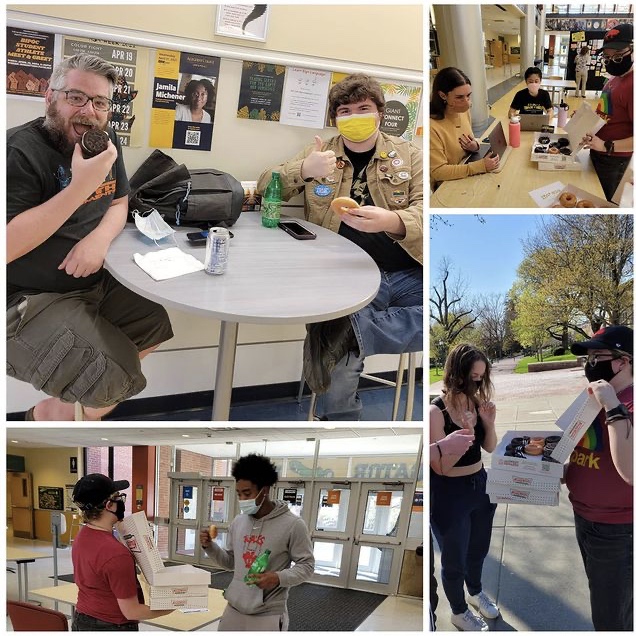 College life is tough as is, but with the added stress of the COVID-19 pandemic and political tension throughout the United States, it can be a bit tougher.

Kyle Stallard, ’22, decided that he wanted to do something about that. During his second year at Allegheny, he saw how stressed his peers were during finals season and figured it would be a good idea to cheer everyone up by handing out free donuts. This year he decided to make the project official, naming the effort “Allegheny Donuts.” He expanded the project — now,  at least once a week, Stallard walks around the Allegheny campus handing donuts out to whoever wants one.

“Clearly something’s not working and I thought to myself, ‘People really, really like a free doughnut,’” Stallard said.

Stallard transferred from Gannon University after his first year to Allegheny.

“I had decided for whatever reason at the time that I was going to give away free donuts during finals, because I knew how stressful finals were to people, so I drove up to Krispy Kreme, bought four dozen donuts and just gave them out to people who were studying, and I did that a couple times,” Stallard said. “Even during my year off I came back and I gave away donuts.”

Stallard explained that he heard stories about how tough things were for students at Allegheny during the pandemic and it inspired him to give out donuts on a regular basis.

Stallard gives out free donuts out at least once a week, depending on the weather. He explained that there is a better chance of him spontaneously giving away donuts if the weather is nice, since the entire endeavor is done on foot.

“The reactions I get are just great,” Stallard said.

Allegheny Donuts has received notoriety on campus. Stallard was interviewed on two separate WARC radio shows, including the Aldi Fresh show, hosted by Madi Sherman, ’22. Sherman stated that she had run into Stallard, who is an employee at Aldi, and invited him to appear on the show. Sherman said that the interview itself was very wholesome.

“(The free donuts were) serendipitous, it would always make my day,” Sherman said.

There are plans for continuation and even expansion according to Stallard. While he does not want the project to become an Allegheny Student Government-recognized club or organization, Stallard does want to expand slightly especially with personnel. In fact he has already added on a permanent member to the Allegheny Donuts endevour in the form of Amelia Rockwell, ’21.

“I’m asking for help every week, if I can get it, because I usually give out like ten dozen donuts, and that’s a lot to carry,” Stallard said.

With the core objective of spreading joy around campus Stallard also wants to record and share some of the reactions he receives when he delivers donuts.

Stallard’s hope is that the project will continue well into the future even after he graduates next year.

The best part of the entire project according to Stallard is that the donuts are completely free to members of the Allegheny community.

“There is no catch,” Stallard said.

“My understanding is that (Stallard) feels that maybe the school isn’t doing much for our mental health,” O’Connor said. “In the middle of the semester, everybody’s really stressed and he’s trying to help everybody out, make things a little nicer, brighter … He’s genuinely just trying to do something nice for everybody on campus.”

Stallard emphasized that the acquisition and distribution of the donuts was as safe as possible, saying that he always uses the drive through when picking the donuts up and that he always wears some sort of protective equipment to make sure that nothing is being transferred except the donuts. He also said that while he doesn’t want Allegheny Donuts to become directly affiliated with the college,he would appreciate help from the college in making sure that Allegheny Donuts remains safe and healthy for the public, especially as it grows.

Stallard pays for every doughnut. While he does accept donations, he does not require them and donation provides no benefit besides offsetting the impact on Stallard’s wallet. He has also said that the latest stimulus check, as well as the Higher Education Emergency Relief Fund  money has helped offset the cost. Stallard also noted that he likes to pay attention to and capitalize on the specials that Krispy Kreme offers, that he’s able to get a better deal on weekends.