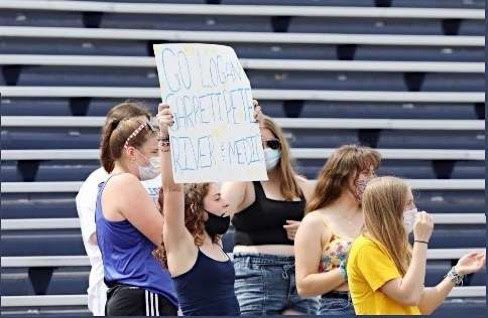 Students cheer on athletes with a sign. After the fall competitive season was completely canceled, a modified spring schedule was introduced, including student attendance in the stands

With spring heralding the return of athletic competitions, fans are now following suit in their return to the bleachers.

Although many sports teams practiced throughout the first semester of the 2020-21 academic year, none were cleared to face outside competition until after students had returned to campus in the spring.

Allegheny College recently eased up on their attendance policy. After kicking off the sports season without fans in attendance, they are now allowed in at a limited capacity, and according to athletes, smaller crowds have not stopped fans from having an impact on the game.

“The atmosphere at games hasn’t dropped off a crazy amount,” Anthony Steinpreis, ’21, said. “There were still people there being loud and making it enjoyable. I think our presence affected the way the games were played, so overall it’s been a good experience.”

While the fans are enjoying their freedom to watch games in person, there is a mutual appreciation between the athletes and those who cheer them on.

“Not that you’re worried about fans while you’re playing but it’s nice to hear them,” women’s basketball player Rylee Donovan, ’22, said. “It was nice that (Allegheny College) let fans in.”

Donovan discussed a time when the men’s basketball team was in attendance along with a good crowd of other students for one of their games. Even in the good times, however, it was tough not to reminisce on what games were like pre-COVID.

“I never got used to having no one in the stands,” Donovan said. “It’s nice to hear people yelling, especially my parents. It was definitely weird not having my parents there this year at all.”

Athletes are not the only ones missing out on some of the lost aspects of competition. Fans are required to sit apart from each other and to remain masked during the games which is a far cry from what games of the past looked like.

“I definitely miss the social aspect of games last year and the student sections,” Alex Heinle, ’22, said. “I really miss the old overall environment of sports. It’s just hard to socialize at games because we have to sit far apart and I also think there are a lot of people who don’t know they can go to games now.”

Steinpreis recalled attending a lot more games pre-COVID while he was sidelined from sports with a shoulder injury. From the sidelines he found his way to the stands and made some memories he will not forget.

“What I miss the most from last year was when we would be able to do theme nights like Hawaiian night,” Steinpreis said. “We were also able to get away with more in the stands so we could do dances and chants but now it’s pretty hard to do those things because of the masks and separation.”

While the atmosphere at games has certainly changed and there are many aspects that fans are missing, the limited capacity has allowed for some unique positives as well.

“It’s weird because we can hear a little bit more of what’s being said during the game,” Steinpreis said. “We can hear the back-and-forth between the players because there is less noise to drown it out.”

While there are bound to be schedule conflicts for many students due to virtually all of the college’s sports happening at once, regular attendees of games have expressed the urge to get more people out to games and build back up the college’s sense of community.

“We should get more people to rally and go to games,” Heinle said. “Even if it’s not a lot of people and we can’t sit together, just having all those people there cheering on the teams would make the environment similar to last year.”

With athletes never having a higher appreciation for fans than right now, there is an opportunity and reason to believe that lots of student-athletes will be supporting each other in a big way this year.

“It’s a little different with men’s basketball because I have some boys on the team, but the reason why I really go to games is to show face,” Steinpreis said. “I want to tighten together the sports community around here. I know if I’m playing a game of football or competing in track, I want people to be there.”

Steinpreis noted that in spite of the circumstances of the world right now, getting fans back into sporting events has been an effective way to get people out of their living spaces. Donovan echoed those remarks and emphasized that an increasing fan presence should be a priority of students.

“Being able to watch games again gives us students something to do and an opportunity to watch their friends play which is special,” Donovan said.