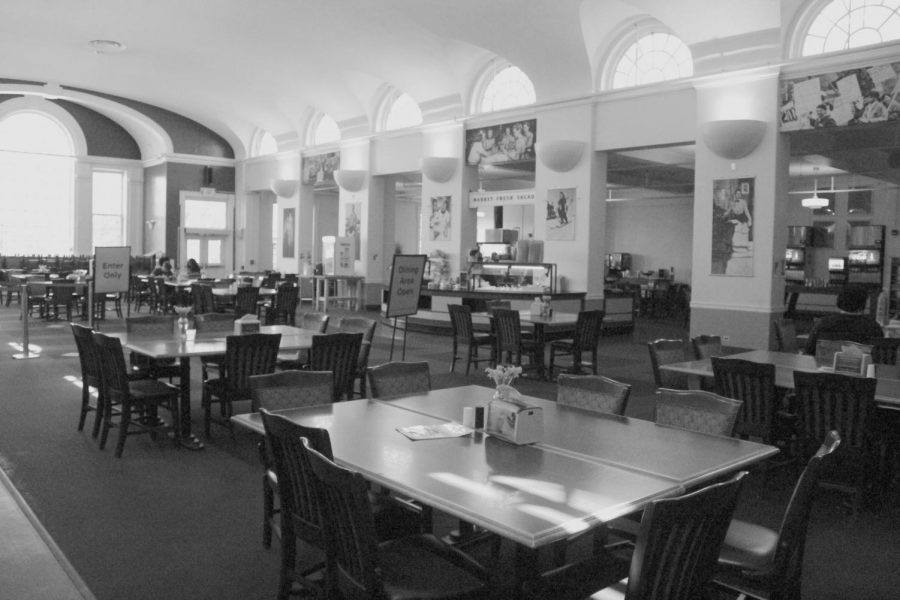 The new punch-card system allows students to get food from multiple stations, rather than have to swipe from each separate station.

It is out with the old and in with the new at Brooks Dining Hall. After a semester and then some of students having to use a board meal swipe at each food station they order from, a new punch card system has been introduced.

Currently, students are able to order up to four items at a food station. For each of those four that they do not use, they will receive a card punch. The remaining spots left on the card are usable elsewhere at another food station.

This new system attempts to allow students a wider variety of options than they had previously in the semester when a single swipe would only grant them access to food at one station. In years prior, Brooks dining hall was an all-you-can-eat buffet where a single swipe would get students in the doors and from there they could get as much food from as many stations as their stomachs could handle.

Although things have yet to return to normal, students have appreciated the attempts to improve the dining hall’s eating experience.

“Very broadly I like the concept of (the punch cards),” David Salazar, ’22, said. “It kind of brings back the all-you-can-eat kind of style that we had our freshman and sophomore year.”

“It’s very conditional,” Salazar said. “I kind of go to each station and see what’s there and if I think I want something then I’ll get the punch card but if not then I don’t because I know I’m not going to use it anywhere else.”

However, even when there are not multiple food stations with appealing options, Salazar acknowledges that the punch cards can be useful for getting double portions at a single station.

Despite limited punches and often limited appealing options, students have found creative ways to take advantage of the new system.

“The food is very hit-or-miss and what I see with the punch cards is people just giving them to their friends so they can use them and save swipes,” Salazar said.

While some may be getting punch cards to either use for themselves or others, many are for the most part avoiding the punch cards altogether.

“I don’t really use them,” Julianna Skowron, ’22, said. “I think I’ve used them maybe once or twice. I get more food than I did at the beginning of the semester before the punch cards, but still not as much as I did before all the COVID changes.”

Those who frequently use the punch cards have found themselves loading up on food and taking it back to their residence hall rather than eating a plate or two at a time in the dining hall. This has caused food waste to become a concern. Many students fill up their punch cards for the sake of not wasting a punch, only to then waste the food that they used the punch card on.

“I remember brunch Sundays after a nice weekend people would just get tiny plates of recovery food,” Salazar said. “But now they’re getting an entire meal and not finishing it so they’re wasting more food.”

Some students have found themselves more inclined to stay away from the dining hall and opt for more deliberate options on campus.

“The new brooks system kind of deters me from going,” Alex Klare, ’22, said. “I find it easier to just order from McKinley’s or make food in my room because I miss the old all-you-can-eat swipes. It kind of limits the options these days.”

Despite attempts to return to normalcy and students now being allowed to eat their food at tables inside of Brooks, food is still being served in to-go containers and some students indicated that the atmosphere has not been the same as it was in previous years.

“I appreciate their attempt to change it but the old way was the way to go,” Klare said. “Especially when everyone could eat in there and you could walk around and linger and see everyone.”

Most students seem eager to put this year’s COVID-19 accommodations in the rearview mirror next year and get back to normal.

”I think the punch cards were a good adoption and that they’re heading in the right direction,” Salazar said. “But I think it would be better next year if they just did the one swipe at the door again.”

Despite student requests for a return to buffet-style dining, Parkhurst manager, Stephanie Lang, stated in a recent article at a recent dining forum that she does not anticipate Brooks Dining Hall ever returning to this model because of the safety concerns COVID-19 has exposed.