A brief history of feline obesity in the US 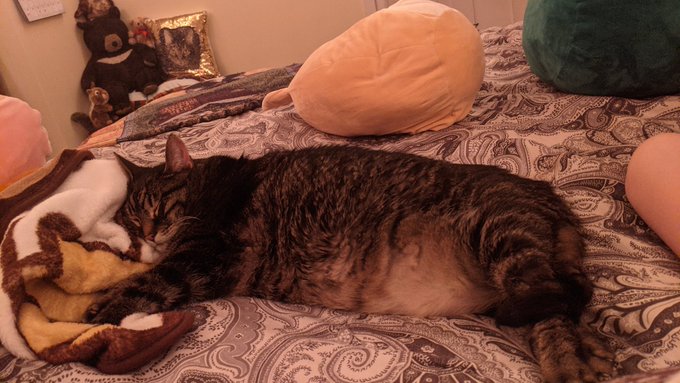 I am a cat mother to an absolutely gorgeous, yet unfortunately immensely overweight fellow named Gus. Chances are that you know others, perhaps even yourself, who have fat cats, as more than half (59%, to be exact) of cats in the United States are overweight or obese.

This statistic naturally leads one to wonder why American cats have become so fat — are cat owners simply grossly overfeeding their cats, unaware of the negative effect on the spoiled kitty’s health? Although this explanation is valid in many cases, there is far more to the picture — in fact, a full explanation draws Christopher Columbus and World War II into the story.

For much of American history, the commercial pet food industry did not exist. Rather than purchasing specific food for their cats, many people simply expected that cats could wrangle their own sustenance from the wild. By the end of the 19th century, however, the commercial pet food industry, beginning in England, had spread into the United States and taken firm root. Canned wet food became a common choice for both cats and dogs, at least in the households that could afford it.

Fast-forwarding to World War II, however, metal rations created issues for canned pet food companies. As a result, they began marketing campaigns to push dry food, quite successfully — by 1946, dry food made up 85% of the pet-food market . Dry food was popular for its convenience, lack of smell and price.

Contributing to the rise of dry cat food was the invention of the trademarked “Cat Chow” extrusion process by Purina in the 1950s. In this practice, the raw ingredients for the cat food are cooked together into a homogenous liquid, then pushed through a mechanical extruder. The extruder puffs the food up to be baked, resulting in an end product which is larger and therefore less dense than its constituent ingredients, giving consumers the impression that it will give you more bang for your buck.

This innovation is not what it seems, however — the extrusion process strips the majority of the nutrients from the food, as well as a lot of its flavor. In order to restore its nutritional value and taste, pet food producers have to put more nutrients and artificial flavorings into the end product.

Moreover, in order for the extrusion process to work, the food must contain high levels of starches, and this is where Christopher Columbus enters the picture. In 1493, after his travels to what would become the United States, Columbus returned to Europe with a pocketful of corn seeds and absolutely no knowledge of how to process it. Thus corn failed to become a significant part of the European diet, all the while it was expanding in importance in the U.S.

As the territory we now call the U.S. was colonized by European immigrants, so too was the American diet colonized by corn. In fact, the U.S. is the world’s largest producer and consumer of corn. Of course, the story of corn is more complex than this one man’s contribution, but to go into further detail would derail this narrative from my focus, that being cat food.

Corn was cheap, and technologies such as canneries and railroads saw to it that the stuff could be grown in excess, distributed all over the country and shoved into just about everything, including cat food. Dry cat food could have never expanded in popularity so rapidly were it not for the assistance of corn starch in the aforementioned extrusion process.

The presence of corn in dry cat food creates a huge problem, however: cats are naturally carnivorous, meaning that they absolutely need to eat meat to survive, and their digestive systems are not equipped to process plants. A cat cannot thrive on a plant-based diet, no matter what. It is also worth noting that cats are meant to drink very little water directly, instead getting the hydration they need from their meats.

When cats are fed primarily dry diets, they get way more plants than their bodies are meant to process, as well as less meat than they need to sustain themselves. As a result, they become full of empty calories, and lethargic from lack of nutrients, conditions which hugely increase the likelihood of becoming overweight or obese. Thus World War II pretty directly contributed to an increase in feline obesity rates — in this sense, we might think of cats as a second class of baby boomers, although their “boom” was in terms of weight rather than population.

The main problem here is that being overweight poses significant risks for a cat’s health, such as increased risk of cancer, heart disease, diabetes, joint pain, hip dysplasia and decreased life expectancy. In light of these concerns, I would argue that continuing to feed a cat a dry food dominant diet is unethical.

However, the unfortunate reality is that although the facts about feline nutrition are out there, they are not as commonly known as they should be. This is the direct result of profit-motivated pet food corporations, who push dry food for its cost-effectiveness (grains are far cheaper than meats, and likely always will be), rather than taking into consideration what is actually best for cats.

I was not personally aware of how detrimental my cat’s exclusively dry diet was for him until recently, and as a result, the darling fellow is grossly overweight. Although he is adorable, I realize now the risks I have exposed him to, and I feel terrible about it. I have taken steps to transition him to a mostly-wet diet, and I urge all other cat parents to do the same.

When I wrote an article expressing my love for my cat, Gus, including some photos, I received some criticism about his obesity, despite my explicit mention of having placed him on a weight-loss diet plan. Furthermore, I explicitly mentioned that I was only four years old when my family adopted Gus — what four year old is in charge of determining what the household pets will eat?

Although these critical comments were hugely outnumbered by positive comments, I just want to acknowledge that although it is entirely true that it is in the best interest of cat lovers to see to it that their cats maintain a healthy weight, the power and influence of the capitalist agenda should not be underestimated. When corporations decide that a particular narrative is best for their profit margins, that is the narrative they will push relentlessly, by means of propaganda and marketing, almost to the extent that the truth is obscure. I think this unfortunate reality diminishes the ethical agency of the consumer such that the disproportionate burden of truth-seeking placed on their shoulders is often at odds with one’s desire to make moral decisions.

I do not mean to suggest that those who want to adopt pets have no responsibility to do proper research into how to care for them, or that corporate interests entirely undermine individual responsibility. I just mean to suggest that this story of feline obesity in the US is complex enough that it would not be right to place the blame entirely on individual consumers.

I think it is most reasonable to reserve judgment towards owners of fat cats, and instead offer education and compassion. It serves no one to make fat cat parents feel guilty for having fattened their cats when dry cat food, the common culprit of feline obesity, is promoted as a suitable source of nutrients. Now that I know better, Gus eats better, but the weight does not come off immediately.

Now, I would like to offer you some advice and information about how best to go about feeding your cat, in the hopes of helping others avoid the mistakes I have made in the past. For one, consider opting for an entirely wet diet. Dry food can lead to dehydration, malnutrition and obesity, while wet food offers more nutrients, a higher concentration of meats and more water, all of which are important to feline health.

If you do choose to feed your cat dry food, be aware of the potential risks and be cautious in selecting a brand. The old axiom “you get what you pay for” is relevant; cheap brands are likely full of fillers such as corn, rice and other carbohydrates, which are not ideal for your kitty’s well-being. The main ingredients in cat food should always be meats.

Also worthy of consideration is how you feed your cat. Free-feeding, or the practice of leaving a bowl of dry food out for your cat to graze, is often a driving factor in obesity because it goes against the natural instinct of hunting, allowing cats to become lazy and complacent under the assumption that food will never be scarce.

My last piece of advice is that you should not listen to me! I am not an expert. Research for yourself how best to feed your pets. If you love your cat, you should properly nourish them. It is deeply unfortunate that war and capitalist interests have muddied the information about how to take care of cats, but there is still hope of fighting back against feline obesity.