Flexibility is music to the Allegheny Orchestra’s ears 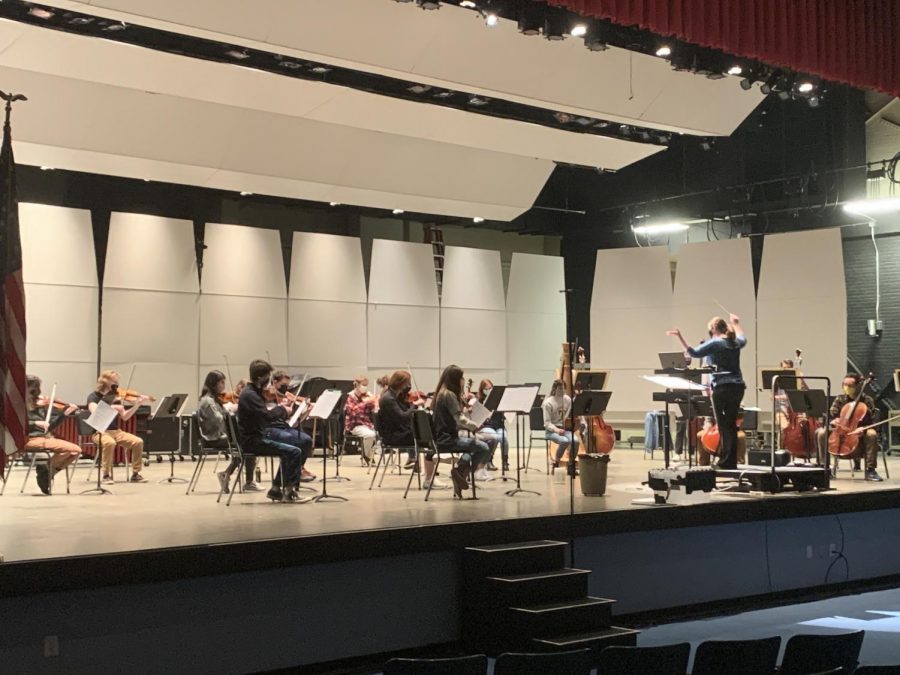 Professor Dearden conducts the Allegheny Civic Orchestra during their weekly practice in Schafer Auditorium. The orchestra is expecting to perform an outdoor concert in May.

The Allegheny College Civic Symphony faced many changes in order to continue rehearsing safely. Among those changes was the decision to only have string instruments in the orchestra this year, therefore cutting out the woodwind, percussion and brass sections.

This reduced orchestra allows for fewer people to be on stage and also allows each person to be masked at all times.

“We’re all masked up and six feet apart which is super comforting,” Sarah Lucas, ’21, said. “I wish I would have known that last semester because I would have joined. I just didn’t want to go if someone was spitting into a tuba a few feet away from me.”

Just as the musicians have made adjustments to practice safely, things have also changed based on what they are practicing for.

“Last semester the orchestra did what’s called virtual ensembles, where each individual did their own recording of their part either with video or just audio and then a technician layered all of those recordings together to create a composite whole,” said Director of the Civic Symphony Jennifer Dearden. “We released four of those last semester and they were really well-received.”

The recordings of these performances can be found on YouTube.

These virtual ensembles have replaced the orchestra’s end of semester performances  that typically take place in Shaffer Auditorium or Ford Chapel. However, the orchestra  has an outdoor concert planned for May 8 or May 9 in the Gator Quad, weather permitting.

“Something that the orchestra has enjoyed doing in the last few years is that in the spring we’ll normally do a themed concert so that all the pieces in that concert will revolve around a central idea,” Dearden said. “A few years ago we did a whole concert of movie music. We’ve also done a concert around nature and the concert that we were supposed to have last year in spring 2020 that got canceled was going to be about animals.”

Beyond performances, circumstances have also changed the dynamic of what the orchestra is able to play.

“Whenever you’re playing a piece there’s a lot of back and forth and talking between sections and that’s definitely limited when we only have basses, cellos, violins one and two, and violas,” Lucas said. “Whenever you have percussion and woodwinds and brasses you’re just able to do more and there’s more versatility in the pieces you can play.”

While in one sense there have been limitations on what the orchestra can play, there have also been some benefits to this as well.

“I think the silver lining is that now in civic symphony we’re able to dig into pieces that are strictly for string instruments, and I think that’s a cool thing to have in my college experience,” Lucas said.

The current circumstances have not only changed what music is played and how it is performed, but it has also changed the social dynamics of practicing.

“Being a freshman, I don’t really know what it was like last year but I’ve been doing orchestra my whole life and there’s something different about sitting next to someone while you play and having a stand partner,” Peter Lantz, ’24, said. “Not having one of those and just sitting by yourself is different because when you have someone next to you then you can make jokes with them about what’s going on and I definitely miss that.”

Despite the changes that have had to take place this year, the civic symphony still provides a space for its members to do something they enjoy.

“It’s been different but I still get to enjoy that two-and-a-half hour escape from everything going on in my life,” Lucas said. “I get to be there with other people who really enjoy making music together.”

This joy for music does not end with those who are playing it.

“I remember last semester Professor Dearden hadn’t heard people play live music in so long and was basically brought to tears by us just play a scale,” Lantz said.

It has taken a lot of flexibility and improvisation to continue the civic symphony through a pandemic but orchestra members and directors alike seem to be enjoying it.

“I am exceptionally proud of them in how resilient and flexible they have been,” Dearden said. “They have brought their A-game every time. There have been challenges and they have risen to the occasion.”