Life lessons from a lovely, lazy loaf of a cat 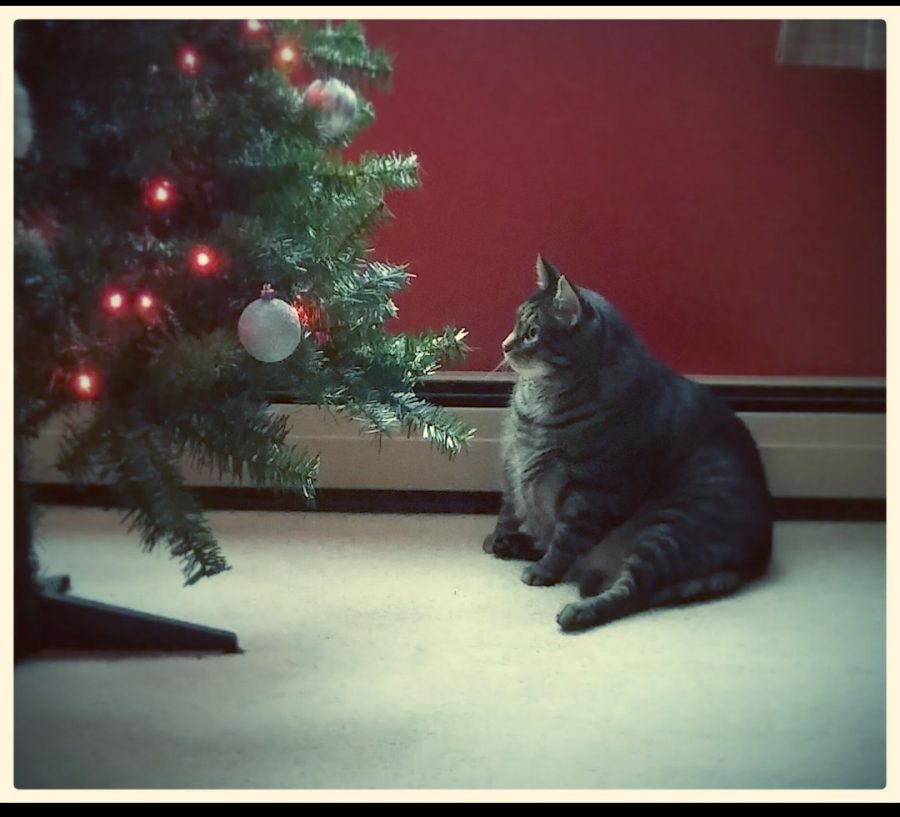 If you know me at all, you know that I absolutely adore my cat. I talk about him, at length, at just about any given opportunity. From his sparkling, peridot eyes, to his snow-white chin, his berry red nose, his sandy, spotted, expansive belly and his lustrous grey and black striped coat, there is not a thing about him I find less than perfect.

Although his true breed and genetic composition are unknown, he has the characteristic Maine coon “M” marking on his forehead. Like Maine coons, he is also quite large, and his long body and tail have, over the years, expanded into something quite impressive — the darling fellow is around 28 pounds or so, with a waistline measuring nearly the same as mine. Please note that I am aware that it is not healthy for a housecat to be so extremely fat, and that over winter break, I have implemented a strict diet plan for him in the hopes of helping him shed a few pounds.

Because of his obesity, he is not able to clean himself very well. As a result, his fur can become matted and plagued by dandruff if no one takes care of it. Fortunately, I have discovered that waterless cat shampoo exists, and it even comes in lavender scent! Using this shampoo, as well as three different brushes, — one for the undercoat, one for the topcoat, and one for mat detangling as needed — I have discovered a very amusing fact: unlike other cats, who flee at the mere sight of the age-old disciplinary tool of the spray bottle, Gus does not give a single hoot about being spritzed with liquids. In fact, he seems to find the process mildly amusing, if anything.

He is not alone in this; I also take pleasure in the process of grooming Gus. I used to view the task as an annoying obligation or chore, but as Gus ages, I have learned many things from him. For one, I have learned to value all the time I have to spend with Gus before he crosses the rainbow bridge. When my family adopted Gus, I was 4 years old, so he and I have grown up together. Just as Gus has grown from being a skittish kitten small enough to fit in the palm of your hand, with ears so large one could only hope that he would grow into them (he did), into his current form, so too have I grown from my own equivalent of kittenhood into my adult self.

In my own process of growing up, I believe Gus has been a formative influence over who I am today. For example, I accredit my hatred of vacuum cleaners to Gus, specifically because of an incident in which I, having observed that Gus was deeply afraid of the awful howling sound the machines emit, tried to comfort him by holding him. He lashed out at me, leaving bloody scratches down the length of my arm. I do not blame him for acting as such — it was his instinct, and he did not know any better — but I do blame him for the fact that the sound of a vacuum puts me on edge to this day.

Another lesson I have learned from Gus is the value of taking care of those who cannot take care of themselves. In his old age, he has become more demanding, for lack of a better word. Still, I do not mind, because I know that he is reliant on me, that his happiness and well-being lies largely in my hands. That it is within my power to better his world, I see as a blessing and a gift: through small acts of caring, I can make a tangible, meaningful and significant impact on the life of an innocent creature who deserves nothing but the best.

There is nothing I would not do for Gus, and there is nothing I expect in return for my love. When people talk about choosing a cat to adopt, either from a shelter or from a previous owner, I often hear youth, lack of health issues and playfulness discussed as the qualities for which prospective adoptive cat parents look. I totally understand why this is — kittens are adorable and have more life left in them, various health issues can be pretty expensive and some people want pets who are active companions.

On the other hand, Gus has taught me to love older cats just as much, if not more, than kittens. I have learned to appreciate having a mellow fellow as a “roommate,” rather than your typical energetic playmate. Although Gus, and many other older cats, does not really do a whole lot, I deeply value his subtle personality and the calm, regal energy given by his presence. It breaks my heart a little bit to know that old, fat, lazy cats face the risk of never getting adopted as people pick shelters clean of kittens. I know if, due to some horrific circumstances, Gus ended up at a shelter, he would likely remain there until death just because of his age, weight and other various quirks  — and what a shame that would be, because he is a remarkably beautiful friend to have.

From the day we adopted him, Gus has been my best friend. I say this without so much as a note of irony — no one else has been by my side with such constancy, love, patience and willingness to listen to my adolescent woes. Now Gus is well into his golden years at nearly 17 years old, and as I think about adopting another cat once he inevitably passes, I will not shy away from picking out a cranky, lazy, obese or elderly cat, because those characteristics are not undesirable but rather natural. Every part of a cat’s life is immensely precious and delightful.

The gratitude and love I have for my darling Gus, A.K.A “Mr. Handsome,” goes beyond what I can express in mere written word, but I hope that in the writing of my appreciation that I can at least impart to a reader some fragment of the invaluable feline wisdom that has been so graciously given to me by my favorite living creature ever to exist.