A one of a kind Super Bowl 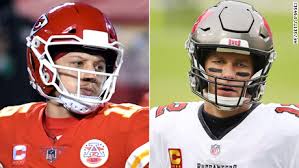 Feb. 7 marks the day that the Tampa Bay Buccaneers and Kansas City Chiefs will battle for the 55th Super Bowl. It also serves as the first championship game ever played at one of the team’s home stadiums.

The Tampa Bay Buccaneers are back in the Super Bowl for the first time since 2003, when they beat the Oakland Raiders for their first ring in franchise history, and have a unique opportunity this year playing on their home turf at Raymond James Stadium.

Football fan Hallie Rieger, ’23, believes that the lack of a full crowd due to COVID-19 means that the Buccaneers will not hold any kind of advantage over the Chiefs in that category.

“I think that in general it could help, but with COVID-19 and there not being a full crowd, it won’t have that much of an effect,” Reiger said. “Both teams will be ready to play and the best team will win.”

One of the major storylines in the build-up to the big game has been the quarterback matchup between Tom Brady and Patrick Mahomes.

Mahomes, in his third year as a starting quarterback in the NFL, already has one Super Bowl ring to his name and a league MVP at age 25. Tom Brady, on the other hand is currently in his 21st season in the NFL and has six Super Bowls to his name — more than any other quarterback of all time.

“I think that for Mahomes to one day be known as the greatest, then he has to beat Brady right now,” Reiger said. “There won’t be many more chances, and even if Mahomes winds up winning multiple Super Bowls, if he doesn’t beat Brady people will always hold that against him.”

Another football fan, Austin Anderson, ’23, felt similarlyabout the quarterback matchup, citing that the head-to-head record between the two will be most important when looking at who was the best down the road.

“I think people will still see Mahomes as great regardless, but if he wants to be recognized as the best ever at some point, then he simply has to defeat Brady this year,” Anderson said. “But both will always be recognized as being great quarterbacks.”

Speculation as to who will emerge victorious is running high, and opinions vary greatly.

“I think it will be close, but the Chiefs will come away with it,” Anderson said. “Mahomes is just too good and has too good of an offensive line to lose the game.”

Samuel Wilson, ’22, is excited to watch the Super Bowl on Sunday for a number of reasons, one of them being the quarterbacks leading their teams out of the tunnel, but more importantly the players they have around them on the field.

The Chiefs not only boast a great young quarterback, but also an All-Pro tight end in Travis Kelce, an All-Pro wide receiver in Tyreek Hill, and a well recognized line that helps Mahomes to have the success he does week in and week out.

Unlike Reiger and Anderson, Wilson believes that the Buccaneers playing at their home stadium will give them an extra bit of energy, despite the smaller crowd

“I think playing at their home stadium gives them more electricity and more of a reason to win, because you definitely would want to win in front of your own fans, even though it won’t be a full crowd,” Wilson said. “I think the Buccaneers definitely have that advantage over the Chiefs, that they have that home field electricity going into it.”

Wilson also believes that Mahomes needs to beat Brady in this year’s Super Bowl in order to one day be recognized as the greatest quarterback of all time. Wilsonexplained why he believes Mahomes’s pursuit of this recognition would not be done with just beating Brady.

“Brady has shown a lot throughout his career, how good he is just in general when he played with the Patriots and now with the Buccaneers, so I think Mahomes definitely needs to beat him here,” Wilson said.

Although Wilson believes that Mahomes beating Brady puts him on the right path, he expressed that there is more to the discussion than just the one game.

“I don’t think beating him here would be the only thing he has to do to earn that recognition. I think he would have to show that he could still play at the caliber he is right now with a new team and a new offensive line, but definitely him beating Brady at the Super Bowl will be a good start.”