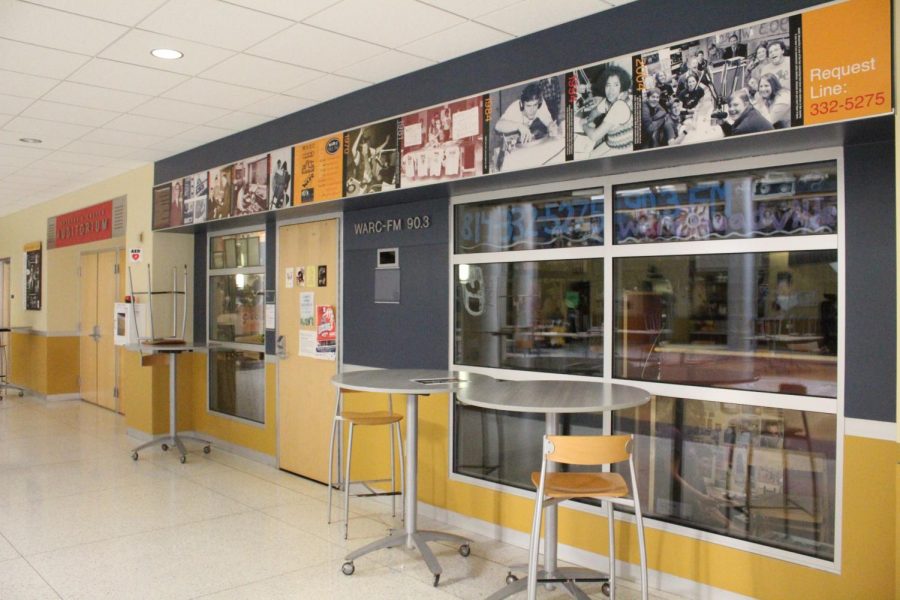 The WARC Studio in the Henderson Campus Center. Due to FCC regulations, the station has only been broadcasting during students’ shows

WARC — a volunteer-based radio station run exclusively by students — has been broadcasting to the general Meadville area since 1964. Listeners tuning into WARC these days often find radio silence if there is no one in the studio, rather than the music that is broadcasted normally. Most people seem to attribute this as another COVID-19 casualty, but the real issue is another story.

“We are currently in the process of getting our transmitter fixed,” previous club President Michela Bocchine, ’21 explained. “We have a small sign-up this year because many people did not come back to campus … funding from (Allegheny Student Government) has been put on pause for a lot of student-run activities on campus … I am confident that WARC will recover from this.”

Bocchine explained some of the new protocols being put into place to protect the studio and the DJs or talk show hosts — including wiping down equipment and limiting the capacity of individuals in the studio to no more than two at a time.

The real trouble seems to be with a defective transmitter.

“It was one of those ‘life happens’ kinds of things,” Bocchine said. “… last summer, we had a really bad storm here in Meadville, and the transmitter was struck by lightning.”

Transmitters are a quintessential piece of equipment for any radio program, as it is quite literally what broadcasts the signal and frequency into the air. Bocchine explained that replacing one of these pieces of equipment was “a lot of money.” The damage from the lightning bolt strike had done extensive damage to the device.

Luckily, Bocchine explained, most of the equipment has been replaced, apart from a bracket and a couple of other miscellaneous pieces.

“If you turn the radio in your car to 90.3 (WARC) you will hear silence,” Bocchine stated, “our transmitter is off … the FCC (dictates) if there is (anything) wrong with (a) transmitter… you cannot have your transmitter on for more than two days… so (students) flip it on and off when they do their shows.”

Joining WARC is simple enough, she explained. The only real requirement is that the students have completed one semester at Allegheny.

“Only 80% of the students are on campus,” WARC President Conor Kennedy ‘21, explained. “There are not as many first-year students.”

Kennedy went on to emphasize the plentiful number of openings for students to schedule a session once they complete some standardized training.

“There is always something broken in the studio,” Kennedy said, “now it is three things at once.”

Kennedy discussed a subsequent reason why music is only broadcasted during the students’ scheduled studio times, explaining that the company that had created the automation software actually went under.

“Previously we would allow 4 persons per session,” Kennedy explained, “due to social distancing protocols, the number has been reduced to two … masks are also required now.”

“The number one thing is getting the transmitter and the automation back up and running as it should be,” Kennedy expressed, “Number two would be reaching out to some of the new people on campus, as well as getting the ASG budget passed so we can pay some of these bills.”

Professor Joe Tompkins, advisor of WARC, described his involvement with the station over the years.

“I have been an advisor for WARC for, I can’t even remember how many years,” Tompkins stated. “I approach it in the truest sense that it is a student-run organization. I don’t take a very heavy hand at what they are doing.”

Tompkins explained that the COVID-19 social distancing protocol has been troublesome for the broadcast.

“This is something that works best when they can get together and hang out in the studio … and have board meetings and whatnot.”

Tompkins described how he felt about WARC as a student resource.

“I feel it is under-utilized,” said Tompkins. “I feel there is a lot of potential …  students can do many things with their own radio station … I fear they do not know the value of this asset that a lot of folks don’t take advantage of.”