Over 500 volunteer for French Creek cleanup 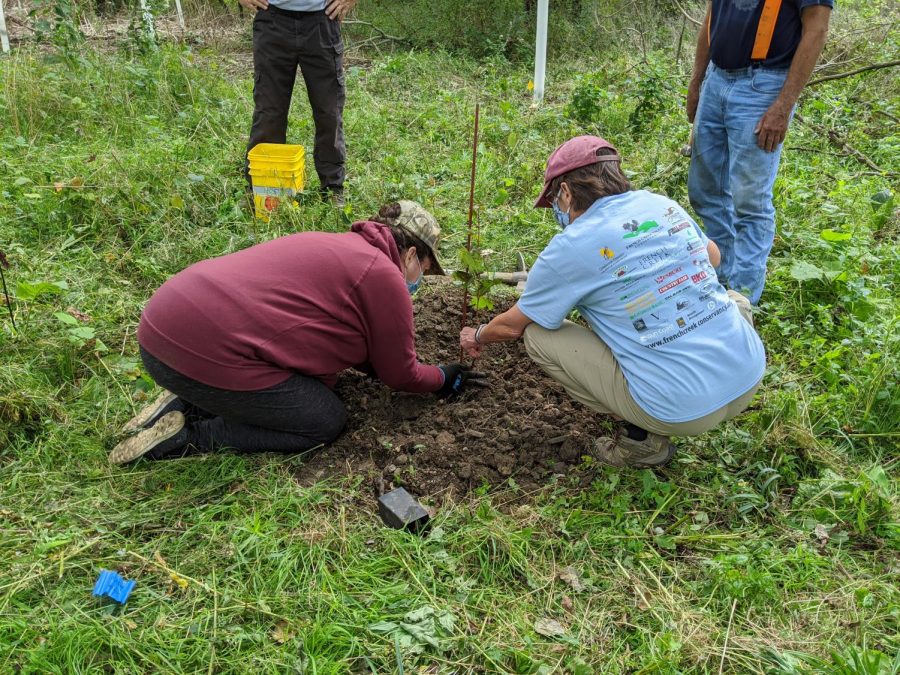 Volunteers help plant a tree as part of the cleanup's stewardship project on Saturday, September 13, 2020

During a normal year, the Cleanup typically brings anywhere from 700 to 800 individuals and teams to participate on foot or by boat to pick up trash along 75 miles of the creek. But for this cleanup, things were a little different.

According to Costa, in previous years, local public schools and Allegheny College groups added two to three hundred more participants, but with the college’s quarantine period, no students were permitted to attend the cleanup.

Bethany Ozorak, who works in the Civic Engagement Office of the Gateway, is the Davies & Fahrner assistant director of community based projects and is the coordinator for the college’s Service Saturday events.

Service Saturday typically takes place once per month during the academic year, and the projects for participants range from leaf raking to gardening to a wide range of other outdoor activities. After the students are done for the day, a picnic of gratitude is hosted by Civic Engagement.

According to Ozorak, the French Creek Cleanup was not an official part of Service Saturday, but because many student organizations like Students for Environmental Action or Fraternity and Sorority Life (FSL) participated yearly in the Cleanup, Civic Engagement partnered with those students to support their community service.

George Ackerman, ’21, serves as the newly titled external activism director for Students for Environmental Action, which, according to Ackerman, “is a club whose purpose is to give students the opportunity to take part in activities such as cleanups, protests, collaborative activities with like-minded organizations and other environmental activism opportunities.”

Ackerman recalls that the group has participated in the cleanup for as long as he has been at the college, with the students carpooling as an organized crew to the creek. He adds that, “first-year students like doing it as a way to get involved in the greater Meadville Community.”

This past Saturday, more than 500 volunteers registered to clean up French Creek.

Among the groups that participated was Seton Hill Elementary, the only K-12 in the city of Meadville to participate, and Edinboro University’s Students of Edinboro for Environmental Defense.

Similarly to last year’s cleanup, the volunteers trudged along French Creek picking up trash, some which were vying for a year of bragging rights with the Hellbender Trophy awarded to the corporate sponsored team who collected the most junk.

Wendy Kedzierski, project director of Creek Connections and board member of FCVC, reported that the final total of creek crud was almost 24,000 pounds nearly 12 tons — with the Meadville Medical Center team collecting the most trash, with just over 7,000 pounds.

This year however, in addition to picking up trash, volunteers could also sign up to help steward, or care for, the land by planting trees, cleaning up new property, clearing trails or staking signs.

When Pennsylvania Governor Tom Wolf ordered the shutdown of non-essential businesses in March, FCVC employees were working from home, and all immediate events were canceled, like the spring cleanup, which was co-organized by a group of students in an Environmental Justice course instructed by former Visiting Assistant Professor of Environmental Science & Sustainability Nicole Gross-Camp.

“It ended up being just the board and staff with trash bags,” Costa said of the spring cleanup.

Costa stated that since March, the Conservancy has been busier than usual with managing newly acquired land and putting stewardship initiatives at the forefront of their work.

“So, because we’ve cleaned up so much trash in French Creek, we can do other things,” Kedzierski added.

SEA is also looking for alternative ways to motivate students to get outside and pick up trash.

“We’re thinking of doing a cleanup on campus. We’re just looking to provide students for other opportunities, a real physical way to get outside and show you care about our environment,” Ackerman adds.

As of now, no student groups are allowed to organize service events off-campus. Nonetheless, Ozorak states that Civic Engagement is open to working with students to find ways to connect with the Meadville community virtually.