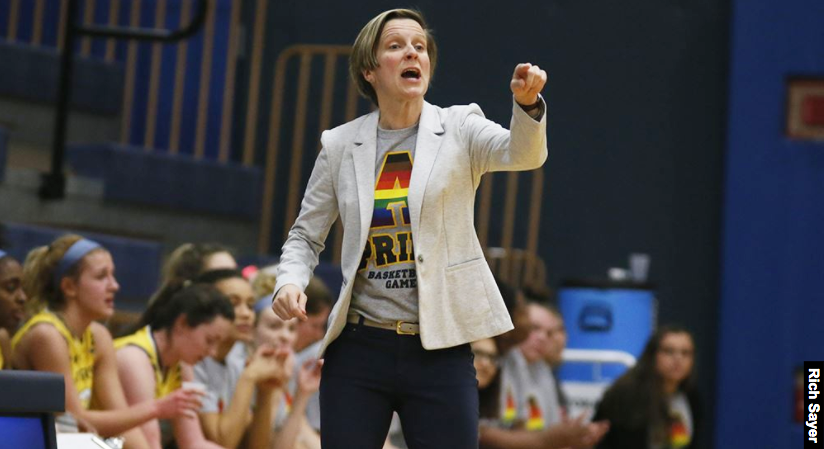 Kate Costanzo, Head Coach of the Women's Basketball team has been nominated for the NCAA Division III LGBTQ Adminstrator/Coach/Staff award. Costanzo has been at Allegheny since 2006.

Kate Costanzo, Head Coach of the Women’s Basketball team is nominated for the NCAA Division III LGBTQ Adminstrator/Coach/Staff award. The inaugural award honors the service of LGBTQ inclusion by a LGBTQ  person in the athletics department. Costanzo discusses what the nomination means to her, and the experiences she has had as a member of the LGBTQ community.

How do you identify?

That’s one of the terms that, (during) the time when I grew up, I guess I would say lesbian. That’s one of those words that I have some friends who just say gay or queer. Even in my immediate friend circle, the term, the phrase, the word does not really matter too much to me. Now that I am thinking about it, if I had to label myself, I would probably say gay.

When did you come out?

It was in 2004. I told my sister-in-law first, and then my brother. I did not come out to my parents until a year after that. After college, though, I honestly had not really thought too much about it until graduate school. I identified so much with the sport of basketball and being a student-athlete that I had not even thought about who I was outside of that. I was always afraid. You hear the stories where parents might disown you or kick you out. My parents did none of that. It took a little while adjusting to the new information. I have terrific support from my parents. It was more intimidating to tell my parents than to tell my brother and his wife.

What does this nomination mean to you?

It is so nice to be recognized for something like this. I am really proud of Allegheny and how much work the college puts into our diversity and inclusion. I know we have a lot of work to continue to do. It was so nice to have our pride game last winter and have the support of the administration to pull an event like that off. It was a great way to show support for the LGBTQ community and that Allegheny and the community embraced it too.

How did the pride game come about last year?

We are always trying to think of ways to reach out to different areas of the community to come to games. We have done camper reunion games, and we did a senior citizen game last year. The pride game came from a brainstorming session with my assistant coach. We thought it would be a great idea to do something like that. I reached out to our athletic director who was super supportive. We could not have pulled it off without Angelica (Perez-Johnson, interim director of the IDEAS Center) and the students from the IDEAS Center. It was so nice to do a collaboration across campus to put together a nice event for the community.

How was pride night associated with the Trevor Project (the leading national organization that provides suicide prevention to LGBTQ members under 25)?

We collaborated with the IDEAS Center on who they thought would be a good organization to donate some money to from our efforts that day. I don’t know how much it was because we gave out a lot of free pride t-shirts, and we collected donations at the door. It was a kind of a big free community event. When we do it again, it would probably be nice to do an even larger fundraising effort. (Next time), we can invest more strategy behind generating even more for the Trevor Project or another organization.

How has Allegheny improved and how can they continue to improve LGBTQ+ inclusivity?

I came here 14 years ago shortly after I came out. I came to Allegheny six months after telling my parents I was gay. I got the sense that this was a safe place to be and this was a place that I would be supported by colleagues. It is hard for me to put a finger on why during the interview process I really felt that, but I quickly met some other people of the LGBTQ community. It felt right and was welcoming. I do think we have a really strong community here. I think that is a testament to the type of place Allegheny is to work. I feel supported and I am encouraged to do work like this, too. I think we can build on the pride game events. It does not have to be a basketball game. Maybe when we get sports back we can do this in a game in the fall as well.

Education, obviously, is important. Having conversations with our youth. Helping everyone understand that everyone is different. That’s a hard thing to do. What is the answer with all of our society’s issues right now? There were a lot of people close to me who never actually knew someone that was gay, but now they know me. (By coming out), that would help in some small way too and help get rid of stereotypes and be accepting. Also, fighting for equal rights across the board for diversity and inclusion. I cannot even think in the last 14 years in that amount of time gay marriage is legal, and the protection at work where that you cannot just be fired for being LGBT. I think we have come a ways in that area as a society but there is more work to be done.

The winner of the NCAA Division III LGBTQ Administrator/Coach/Staff award will be announced in January 2021 during the now-virtual NCAA convention.