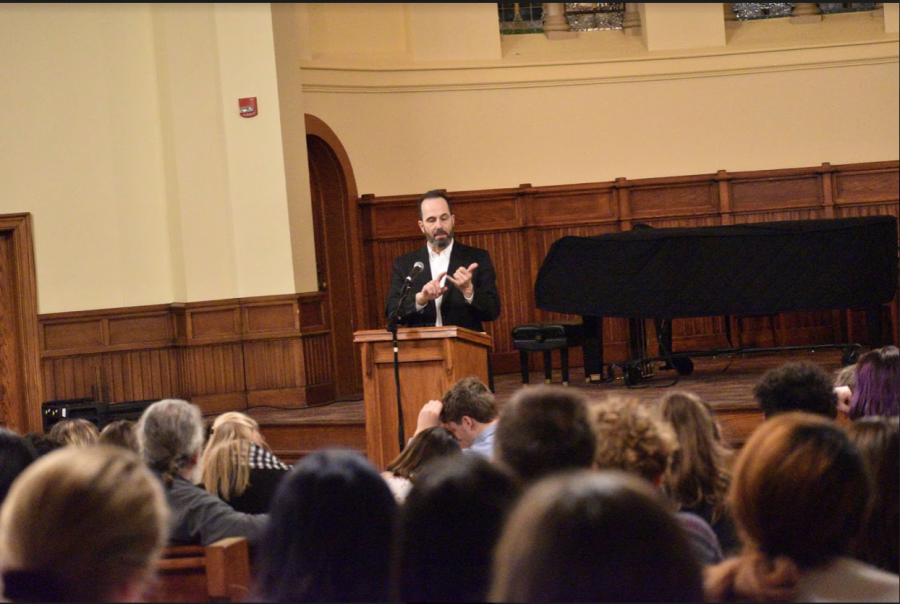 Philip Gourevitch discusses his experience reporting in Rwanda at 7 p.m. on Monday, Feb. 24, 2020, in Ford Chapel.

Antwon is a Rwandan man who has learned to govern his devastations, rather than be governed by them — or so he told Philip Gourevitch over drinks one night at a bar. Like hundreds of thousands of Rwandans, Antwon is still affected by the Gacaca court hearings of the early 21st century, in which he faced the murderers of his family members as they confessed their crimes in exchange for reduced prison sentences. The Rwandan government summoned him to forgive the perpetrators, and he has since grappled with the order in more ways than one.

Gourevitch, an award-winning author, staff writer for The New Yorker and former editor of The Paris Review, shared his friend’s story during a lecture on Monday in Ford Memorial Chapel. Antwon’s is just one account from the Rwandan genocide in 1994, in which 800,000 people lost their lives in the span of 100 days.

Gourevitch’s reporting on the mass atrocities began in 1995, and has continued throughout the last quarter century in the form of prize-winning books like “We Wish to Inform You That Tomorrow We Will be Killed With Our Families” and in-depth articles published in The New Yorker.

“The book was written and reported in 1995, ’96, ’97 and published in ’98, and it was much more about the origin, genesis and world’s response to the genocide, as well as the early aftermath,” Gourevitch said in an interview with The Campus.

The years following the genocide were an incredibly tumultuous period in Rwanda, according to Gourevitch. Close to a million of the country’s then population of seven million lost their lives at the hands of a large number of propagandized people — estimated to be hundreds of thousands.

“You have a structure, where you have a state structure and a political leadership structure, at the very top of a state as well as at very many local administrative levels,” Gourevitch said.

At this point, authority figures in Rwanda began to think about Gacaca, a system that lightened prison sentences in exchange for telling the truth about a crime. The concept originates from Rwandan tradition, but no one had thought to implement it for offenses like murder, let alone genocide, according to Gourevitch.

For about a decade, Gacaca trials took place in thousands of established courts across the country. Community members like Antwon were called to listen to killers paint vivid pictures of their loved-ones murders, which were often carried out with clubs and machetes.

“People talked about (Gacaca) as reconciliation, but actually once I had a conversation with… the head of the Gacaca courts national system,” Gourevitch said. “And when we were talking about it she said, ‘I mean, Gacaca, the idea is that should make … reconciliation a possibility.”

Yet in official rhetoric from Rwandan authorities, it appeared as though reconciliation was occurring through Gacaca, rather than representing it as “a stepping stone toward reconciliation.” Gourevitch said he finds the latter to be much more credible.

During his reporting, Gourevitch spoke with a number of government officials such as Paul Kagame, now president of Rwanda and former military leader in the late 20th century, survivors like Antwon and perpetrators of all levels. His visit to campus comes following a trip to Rwanda, headed by Associate Professor of Psychology Lydia Eckstein and Associate Professor and Chair of Political Science Shanna Kirschner, this past winter break.

“We are thrilled to have (Gourevitch) here tonight speaking about his distinguished career as an author and a journalist,” said Matt Bauer, ’20, as an introduction for Gourevitch before his Monday lecture. “Throughout much of the past 30 years, Gourevitch has explored the darkest facets of human behavior, delving into both why individuals commit atrocities and the political and economic institutions that enable them to do so.”

The trip was a part of two semester-long courses — one of which is continuing this semester — in which students studied genocide and reconciliation. As part of the courses, students read Gourevitch’s 1998 book.

Yet Allegheny students have delved further into the history of the Rwandan genocicde. On Feb. 7, students who attended the trip to Rwanda held a town hall in Quigley Auditorium to discuss their takeaways from the trip. They had tour guides from Ageis Trust, an organization that works to prevent mass atrocities and crimes against humanity, and had the opportunity to visit the Kigali Genocide Memorial in the country’s capital city.

By 2010, the vast majority of Rwandans were under the age of 20, Gourevitch said during his lecture. One of the byproducts of the genocide is an accelerated generational shift — many of today’s Rwandan citizens are too young to remember the genocide or even its aftermath. What remains today is an incredibly complex situation that the country and its people, like Antwon, are forced to reckon with.