The Allegheny Men’s Lacrosse team opened their inaugural season with a 7-9 loss against Baldwin Wallace College in Berea, Ohio, on Wednesday, Feb. 26. While other existing athletic teams on campus have longer, more detailed histories, the men’s lacrosse team is attempting to build a continuous foundation within Division III collegiate sports.

As the men’s lacrosse team gets their feet wet in their inaugural season, the Gators will look to be competitive within the North Coast Athletic Conference. Head Coach Thomas Pearce and team captians David Kraus, ’23, and Dillon D’Amato, ’23, said that they are committed to helping the team succeed in its first season. 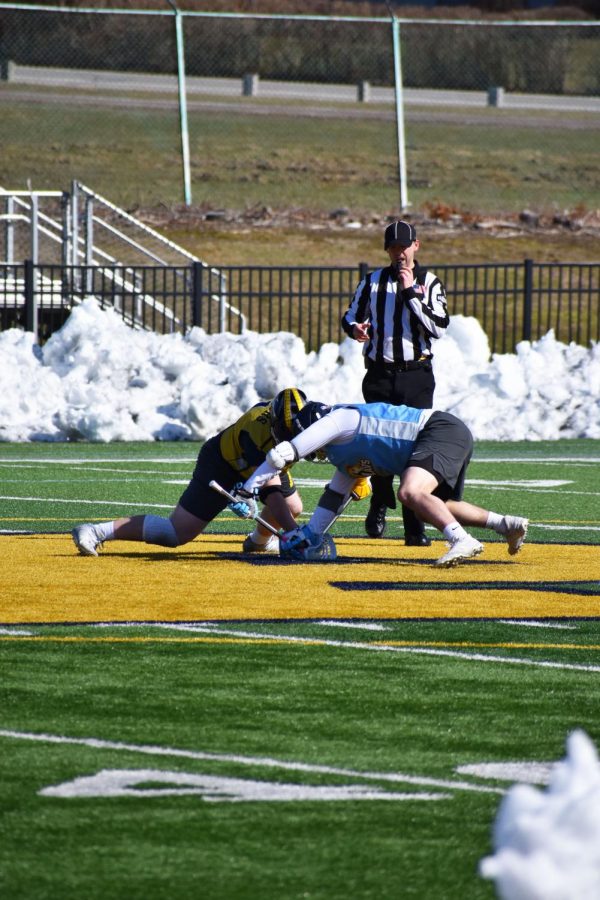 Pearce has a decorated history as both a lacrosse player and coach — as an undergraduate at Gettysburg College, Pearce was a three-time All-Centennial Conference pick and two-time All-American from 1998-2001. Although the Gettysburg College Bullets lost the Championship game in Pearce’s final season as a player, he worked at Gettysburg as an assistant coach from 2006-2009 and helped the Bullets win four straight Centennial Conference titles.

After his coaching stint at Gettysburg, Pearce joined Frostburg State University and served as the head coach from 2009-2018. He helped to reestablish the men’s lacrosse team after a 30-year hiatus as a club team. After three years back in the conference, Fr ostburg State earned a spot in the Capital Athletic Conference postseason, and the following year made it to the Eastern College Athletic Conference championship.

Pearce came to Allegheny as head coach of the men’s lacrosse team with these many accolades under his belt. The coach could not believe his good fortune when he saw that Allegheny did not have a lacrosse team, and remarked that another chance to start a new program was too good of an opportunity to pass up.

“(Allegheny) seemed like the type of place that should have a strong men’s lacrosse program, so when they decided to move forward, it was a pretty attractive opportunity for me,” Pearce said.

When Pearce accepted the position as the head coach at Allegheny College in June of 2018, he knew that he had to focus on the recruiting process.

According to Pearce, he is already reaching out to recruits for next season and currently has a list of potential player’s names on the whiteboard in his office.

When talking about what he looks for during the recruiting period, Pearce said he scouts “(players) that are open-minded to starting a lacrosse program.” Kraus and D’Amato were brought on as the first captains of the Allegheny Men’s Lacrosse team because of their desire to unite the team, according to Pearce.

Kraus is from Sewickley, and graduated from Quaker Valley High School. He plays attack and midfield for the men’s lacrosse team. Lacrosse runs in Kraus’s family, as his dad and three sisters are all lacrosse players. He brings years of experience to the team and has played lacrosse since the second grade.

Similar to Pearce, Kraus wanted to be a part of a new college lacrosse team and is ready for the challenge that the inaugural season presents.

“We have a lot of potential,” Kraus said. “People know how Allegheny can be a really good sports team in lacrosse, and I think people will see that we are going to rise up to the occasion once we play some really good teams.”

D’Amato also played lacrosse from a young age, and currently plays defense for the Gators. D’Amato, a resident of Tolland, Connecticut, and a graduate of Tolland High School, said that he really wanted to go to a liberal arts school.

Pearce was influential in D’Amato’s decision to attend Allegheny. He said Pearce gave him a tour of the school and took him to Brooks Dining Hall to get to know him better. D’Amato said he was sold by Pearce’s gesture, and is honored that Pearce as well as his fellow teammates chose him as captain.

“(Kraus and I) stepped up as leaders of the group,” D’Amato said. “We would lead the stretches and everyone would ask us questions. My skill as a lacrosse player helped in making that decision too.”

Although the majority of the team are first-years, D’Amato and Kraus said that they are both confident in their abilities as captains. They both have immense talent on the field, led the players during practices and made sure everyone is keeping up with their schoolwork. As a result, Coach Pearce’s recruiting process has already paid dividends before the season even began.

In the opening loss to Baldwin Wallace, Patrick Hogan, ’23, led the team with a hat trick on seven shots, and Kraus tallied two goals and an assist for the Gators.

Allegheny Men’s Lacrosse will face off against Heidelberg University in Tiffin, Ohio, on Saturday, Feb. 29. The team will play its first home game against Hilbert College at 7 p.m. on Wednesday, March 11, at Frank B. Fuhrer Field.