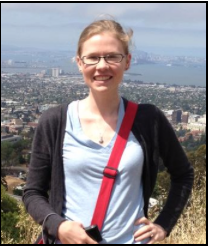 Additionally, Connell Pensky’s presentation focused on how sensations combine in the brain and how the visual system interprets images.

Before Connell Pensky began her presentation, Associate Professor of Music and Director of Choral Activities James Niblock, ’97, made the announcement that the Academic Support Committee was looking for faculty interested in being a part of the Karl W. Weiss Faculty Lecture Series during the 2020-2021 academic year.

“Tonight we will hear from Dr. Allison Connell Pensky,” Niblock said. “She joined Allegheny psychology and neuroscience faculty in 2013, and she has established a behavioral and electrophysiology laboratory to study perception.”

Connell Pensky began her lecture by defining sensation as detection of external stimuli by our sense organs. Whereas, perception was defined as internal experience of these stimuli by a process carried out in the brain.

The presentation contained a number of perceptual experiences and illusions to explore how different perceptions are created. Illusions are an important tool in helping scientists and scholars better understand how brains process information.

“If you can understand how to trick the brain, then we can work backwards to understand how we constructed this perception in the first place,” Connell Pensky said.

Illusions also prove that perceptions do not always match what is happening in the world, according to Connell Pensky.

What is in the world is not always what is in your mind. Sensation is not equal to perception, and perception need not equal reality, according to Connell Pensky.

Connell Pensky utilized a number of videos and images to illustrate the difference between perception and sensation throughout her presentation.

One example Connell Pensky utilized was a video from Jimmy Kimmel Live about Starbucks’ Costa Rica Finca Palmilera, which is the company’s most expensive cup of coffee. In the clip, Kimmel surveyed coffee drinkers to see if they could tell the difference between the “super premium” cup of coffee and a regular cup of coffee.

Kimmel then revealed that they did not even purchase Starbucks’ new blend, but instead both cups were from the same average pot of coffee. However, each taste-tester, except for one, identified a difference between the two cups.

“(Kimmell) set that expectation,” Connell Pensky said. “They changed the people’s minds about what they should be tasting here, and then they constructed this whole reality that one of the coffees was far superior than the other.”

Connell Pensky also explored auditory perception. Members of the audience heard a number of different words from the audio recording, including down hill, don’t go, heel toe and landslide.

After, Connell Pensky revealed that there were no audible words in the audio file. However, the psychologist who created the file, named it “Hilda.” Connell Pensky played the audio file one final time, to which every audience member heard the name “Hilda” being continuously repeated.

Things that are on your mind might come through in what you are hearing in from the audio file, because the brain is attempting to create meaning out of meaningless material, according to Connell Pensky.

Connell Pensky shared a few more illusions with the audience before concluding her lecture with question and answer section.