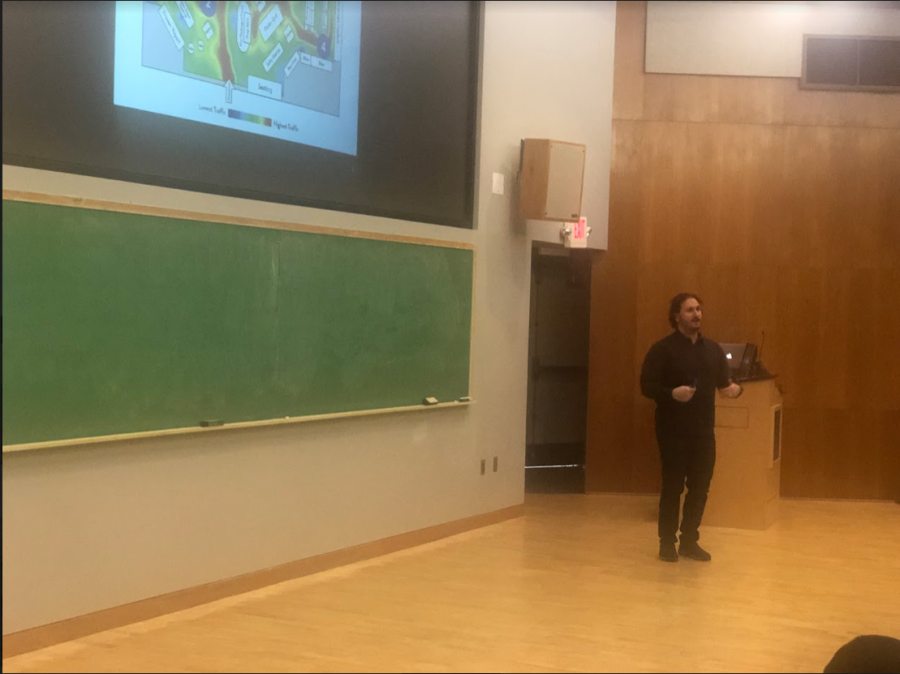 “Our speaker today is most likely going to change the way you shop on your next shopping spree,” Medha Nag, ’20, said during her introduction of Barbera.

Barbera is an award-winning consumer psychologist and business strategist and is “a leading expert in complex factors that drive the entire consumer decision-making process, including consumer behavior, emotion and experience,” according to Allegheny’s website.

The White House recognized Barbera for his contributions to entrepreneurship in 2015.  Barbera has also been a TEDx presenter, and presented his work on four continents.

Before beginning his presentation, Barbera handed out iClickers to each member in the audience to aid them in his interactive presentation.

Barbera began his presentation with a game he called “four lies and a truth.” Audience members were presented with five options and had to guess the one fact that was true about Barbera.

The options included Barbera being arrested in college for streaking, got pulled over on the way to Allegheny, rode a motorcycle to the Arctic Circle, won $12,394 on Jeopardy and drove the pace car during a NASCAR race.

While most people predicted the truth was Barbera getting arrested in college for streaking, the actual correct answer was that Barbera has ridden a motorcycle to the Arctic Circle.

“If I was a product and you were the consumer, you just judged me,” Barbera said. “This is how we judge our products and services and make purchase decisions.”

Barbera explained that the average person will open the FedEx package first because they perceive the package to be more expensive and therefore more valuable. Additionally, Barbera noted that FedEx’s orange and purple logo is an “awkward color combination,” which makes it stand out among other pieces of mail.

“If you ever want to send a resume to someone, FedEx is the way to go,” Barbera said.

During his presentation, Barbera also explored how consumers make purchasing decisions based on comparison, not the actual price of the item.

Barbera then posed another question to audience members — Why are flowers typically located towards the entrance of a grocery store?

Answer options included flowers being a high profit margin, they are on sale, they look pretty or because they look fresh.

Most people selected that they are either on sale or that they look pretty. However, the correct answer is because they are fresh, according to Barbera.

“If you walk into a grocery store and you see nothing but canned items as the first thing, you are going to assume cognitively that everything in that store is canned or preserved or not fresh,” Barbera said. Barbera then explained that flowers cause customers to perceive that all items in the grocery store are fresh.

Barbera then shifted into discussing apples, and referenced the chalkboard signs that are often used to advertise apples.

Chalk signs are another tactic used by companies to help products appear fresh to consumers. Barbera also encouraged audience members to attempt to erase the chalk, because what appears to be a chalkboard is most likely printed by a manufacturer in order to give the impression that the produce is fresh.

Additionally, Barbera explained that menus are one of the most persuasive items in marketing.

“When you are seated in that restaurant, there is a 99.999% chance you are going to make a purchase,” Barbera said.

“We buy things because we want to be that person,” Barbera said. “Although I study consumer behavior and am a consumer psychologist, I am just as guilty as any other human.”

However, trust is the one consumer decision making variable that stands out among the rest, according to Barbera.

Barbera concluded his presentation by presenting what he refers to as the retrust model. Retrust stands for remarkable, experiential, transparency, reciprocity, utility, social status and timeliness.

Finally, Barbera hosted a brief question and answer session before his presentation adjourned.