With new developments over winter break and the beginning of a new semester, Allegheny continues to discuss plans regarding United Methodist Church 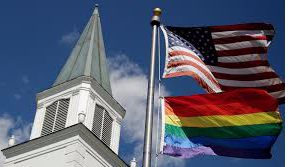 Methodist churches across the United States fly LGBTQ pride flags to show support for members of the LGBTQ community in church congregations.

For months, the United Methodist Church’s decision to uphold the Traditional Plan in March 2019 has been a prominent discussion on campus — the plan would exclude members of the LGBTQ community from certain church rites. With the beginning of a new semester, the college’s work surrounding this significant decision continues.

The UMC has also continued to work on the problem in the form of new proposals passed over winter break. Taking the new proposals into consideration, administrators and Allegheny Student Government continue to meet and discuss what comes next for Allegheny, a United Methodist-affiliated school.

Jane Ellen Nickell, college chaplain, discussed the changes made amongst the UMC over break, and how they add additional factors to be considered before Allegheny can make a firm decision over what to do next regarding disaffiliation.

Nickell described a new plan that was passed called Protocol of Grace and Reconciliation through Separation. This plan makes two things possible: conservative members of the church would be allowed to split off and form their own body, and the United States would be able to become its own region of the church.

“What this was, was a negotiated plan where conservatives could leave and form a separate denomination,” Nickell said. “This made a lot of news. It’s not a done deal. It would have to be approved by the United Methodist General Conference in May.”

Nickell added that a significant number of the negotiations were done by people and representatives outside of the U.S., regions which had not previously been considered in these discussions.

“People are cautiously optimistic that this might signal an end, but it’s something that would have to be voted on by the General Conference,” Nickell said. “They would be able to make amendments to it and would be able to change some of the things that were negotiated during this process.”

Additionally, Nickell said after this proposed new plan, the original Traditional Plan, which states that church members of the LGBTQ community would not be allowed to get married, have a Methodist pastor preside over their wedding or be ordained as a pastor, would most likely be overturned.

Another part of the proposed plan, according to Nickell, is for the U.S. to become a separate regional conference, which was voted on by the presidents of Methodist Affiliated colleges in January.

“This means (the United States) could set their own policy,” Nickell said. “Whereas the votes to keep the Traditional Plan that we’ve had around sexuality have been largely influenced by regions outside the U.S. where they have more conservative cultural norms around sexuality. … It’s likely that if either of these plans are passed, the Traditional Plan would be overturned.”

Nickell said that what is left for Allegheny now is to decide whether or not to wait and see what happens in May with the United Methodist Church when the vote is taken and the group of people supporting the Traditional Plan are given the option to leave, or if it makes sense for the college to remain affiliated at all.

“I think the issue that Allegheny is still thinking about is whether it wants to remain church affiliated at all,” Nickell said. “I think this sort of has raised this larger question of, ‘is this a time that we want to be affiliated with any religion?’”

In an email to The Campus, President of Allegheny Hilary Link stated that the ultimate decision is for the Board of Trustees to make, but the college would keep the community updated as the semester continues.

“We are continuing to engage the community about the best decision forward for Allegheny,” the email read. “This is a board decision, so we will be engaging the board at upcoming meetings. We will be continuing to involve the Allegheny community in our decision-making process.”

Due to traveling abroad for the college, Link was unavailable for further comment.

ASG also discussed the UMC updates and what that meant for Allegheny during its first general assembly meeting of the semester, where resolution 1906, stating that disaffiliation from the church was in the best interests of the students, was brought to the table.

A five-minute moderated discussion was held to discuss the resolution before ASG called for a vote.

ASG President Jason Ferrante, ’20, reminded the room that the discussion was supposed to happen at ASG’s meeting last semester which was canceled. This was due to the meetings held with Link and other administrators before winter break about this topic. Additionally, Ferrante informed senators about the new decision to split, but said that it most likely will not happen until May.

Noah Tart, ’22, shared with ASG the conversation he had with a Methodist pastor regarding where church members in the U.S. stands in favor of the LGBTQ community in the church, specifically on a previous vote in 2016.

“(The pastor) said that the Methodist church is one of the largest non-Catholic churches in the world,” Tart said. “The votes for America (on this topic in 2016) were 2-1 in favor of the LGBTQ community. Other countries that have laws against this; like China I think was one of them; that voted against this. But it does look like the church intends to split into three parties.”

Quin Broussard, ’22, added that the resolution did not mean the college would immediately disaffiliate with the Methodist Church. It just meant that ASG would be putting its support behind disaffiliation, according to Broussard.

“So this wouldn’t automatically disaffiliate us, it’s just confirming our support, along with (the support of) several other committees of the college,” Broussard said.

Members of ASG pointed out that Allegheny’s affiliation with the United Methodist Church is the college’s only religious affiliation, and that the Traditional Plan goes against Allegheny’s statement of community.

A petition that was sent around campus and signed by many students was also brought up, showing that there is strong support from the student body toward disaffiliation.

Following the meeting, Ferrante and ASG Vice President Elyse Cinquino, ’20, expanded on what passing the resolution would mean.

“We were supposed to take up this resolution which would call upon the Board of Trustees from ASG, which is the official student voice on campus, to call for them to vote in their next meeting to disaffiliate from the United Methodist Church,” Ferrante said. “This resolution we were originally hoping to consider on Dec. 10, but that was the same night and time as the meetings with President Link and Missy Feeley, so we canceled that meeting.”

The resolution is the result of attendance at those meetings along with constituent comments and internal discussions amongst ASG, according to Ferrante.

“We and the senators and committee that made the resolution feel there is a multi-pronged reason for why the college should disaffiliate,” Ferrante said. “Part of that was the Traditional Plan, but there was also a sentiment that we as a college are not that strongly affiliated with the United Methodist Church as is. They don’t provide much financial ability, and in some ways it can hinder non-Methodist students’ expression of faith, or lack thereof, on campus.”

Cinquino added that there is also not a strong knowledge on campus that the college is affiliated in the first place.

“I mean, I didn’t even know when I toured at Allegheny, or came to an overnight, or when I got accepted and decided I was going to come here,” Cinquino said. “So it’s not a very prominent thing.”

The resolution was created after a great deal of talk and research, including last semester’s listening sessions, Cinquino said, and now that it has been passed it stands as the official voice of the students to the Board of Trustees.

“This was something that we thought upon, and we did research, we talked to students, there were listening sessions, that kind of thing, and this was the resolution that was passed,” Cinquino said.

Now that ASG’s resolution has been passed, Ferrante and Cinquino will take it to the Board of Trustees at the meeting, in conjunction with other things already passed by the Faculty Committee and the Finance and Facilities Committee, according to Ferrante.

Cinquino said that this was “definitely a very important stance that we want to take.”

Additionally, Cinquino said that from what ASG has heard, there is a general consensus among students to disaffiliate.

“From what we’ve heard at listening sessions or from senators and their constituents, there doesn’t seem to be a very strong voice to stay, or even just in general a reason to stay,” Cinquino said.

Other reasons for the lack of a strong voice include the comfortability of LGBTQ students at Allegheny, according to Cinquino.

“Looking at the petition that was started last year, going to the listening sessions, listening to feedback, having our website open for feedback, having general assembly meetings on this, listening to all of the concerns that have been brought up, reading the Traditional Plan, we feel like we’ve done our due diligence, but we always want to make sure that what we do is in the best interest and with the support of the student body,” Ferrante said.

“So, seriously, any feedback anyone has, this is a big decision that the college will be making, so we want as much feedback as possible,” Ferrante said.