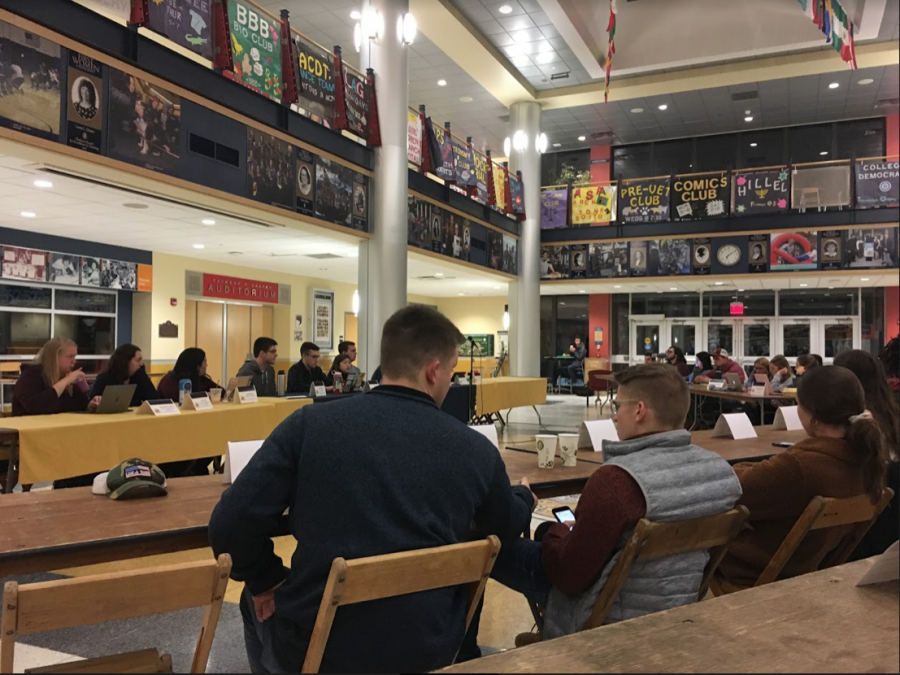 Allegheny Student Government discusses the United Methodist Church resolution, along with the need for a new Director of Community Relations at General Assembly at 7 p.m. on Tuesday, Jan. 21, 2020, in the Henderson Campus Center lobby.

During the weekly Allegheny Student Government general assembly meeting, a large number of announcements were made and a discussion about campus safety was held.

Since there was not a guest speaker, assembly began with cabinet reports, shortly following attendance at 7:04 p.m. Tuesday, Jan. 21, in the Henderson Campus Center lobby.

Before cabinet reports, a call for constituent comments was made by Vice President Elyse Cinquino, ’20, prompting Maximus Levinsky, ’21, to bring up the college’s involvement with the United Methodist Church. Levinsky said he hoped to reach a resolution on the issue and leave the UMC to promote inclusivity in the college.

Cabinet reports commenced shortly after, with the Director of Communication and Press David Roach, ’21, making an announcement on their efforts to move forward with the creation of “How to: ASG” videos by getting in touch with the class presidents after the next weekly assembly.

“It will help get the word out on how to be involved with ASG,” Roach said. “We’re really looking forward to that.”

Following Roach, Director of Diversity and Inclusion Taylor Marzouca, ’20, reported that her committee meetings have been moved to 1 p.m. on Fridays. Marzouca continued by announcing that they were looking for speakers to host an event this semester.

To conclude her report, Marzouca said her committee will send out the application for the ex-officios event.

“We’re looking for people who, above everything, are just super organized and have a knack for event planning,” Marzouca said.

Following Marzouca, Cinquino made a quick, important announcement about the Director of Community Relations position being available. Cinquino encourages interested students to send an email to President Jason Ferrante by 5 p.m. on Thursday, Jan. 23.

The next report came from Ashley Leonard, vice president of the class of 2020 and Secretary of Community Relations. She started the report by revealing that the committee discussed hosting another town hall in the near future, possibly including the new members of Meadville City Council, Autumn Vogel and Larry Mcknight.

“(We want to) talk to the community about their concerns and bettering the relationship with the Meadville community and Allegheny College as a whole,” Leonard said. “(It’s) important to have the townspeople like our college and for us to support them and their businesses also.”

Leonard also announced that the committee hopes to collaborate with the Political Science Department to have more diverse locations as polling places for the next election. To finish her report, Leonard stated that they were planning on creating a pamphlet for 2020 summer orientation to give to families and students to get them acquainted with businesses in and around Meadville.

After a few short announcements by Attorney General Brandon Zabo, ’22, and Chief of Staff Jared McHale, ’20, Co-Director of Student Affairs Genesis Pena, ’22, began her report by announcing that the Safety Committee’s Finance Consultant Linda Wetsell informed her and Co-Director of Student Affairs Kelsey Evans, ’20, about the new security on campus and  additional safety measures the college was taking.

“(Wetsell said) they’re really focusing first on residence halls and then branching out to academic buildings and common buildings,” Pena said. “But they are making sure to do everything over time.”

To complete her report, Pena made two announcements. The first being about the Indigenous Peoples’ Day resolution and moving toward a vote in the upcoming meetings, and the second about the free feminine products stocked in the campus center bathrooms, which is part of a larger initiative to provide free sanitary products to students on campus. This last announcement received overwhelming approval from the attendees.

After Pena, the Director of Sustainability and Environmental Affairs Cat Lord, ’20, announced a possible collaboration with Students for Environmental Action and the Environmental Science Department to plan events for the 50th annual Earth Day.

Following Lord, there were a few additional cabinet reports before ASG moved into class reports, which centered primarily around upcoming events. Class of 2022 also plans to send out an interest form in hopes to fill the available senate position and discussed proposals to include more TVs in the common lounges.

During her vice president’s report, Cinquino announced that she attended a Campus Life and Community Standards meeting to discuss ASG’s Indigenous Peoples’ Day proposal and the next steps if it were to be approved.

Ferrante, ’20, reported that the major concert artist for this year will be announced on Jan. 27, as well as the $7 tickets for the event that will be available the same day. Ferrante also announced that President of Allegheny Hilary Link will be the guest speaker for the Feb. 18 ASG general assembly. Finally, to complete his report, Ferrante informed the attendees that he will be meeting with the new Director of Public Safety, James B Basinger, on Thursday, Jan. 23.

Moving into unfinished business, member of the Diversity and Inclusion Committee Quinn Broussard, ’22, motioned to vote on and approve Resolution 19-06, which is a proposal for the college to disaffiliate from the United Methodist Church. Resolution 19-06 passed with a vote of 14-3.

Moving into new business, Cinquino offered to discuss the possibility of having security cameras on campus in future meetings.

“I would recommend talking to your constituents about this being in what capacity,” Cinquino said. “That could be parking lots, just outside of dorms, near entrances, that kind of thing.”

Surveillance on campus seemed to be a highly debated topic, as Ferrante explained that in years past, ASG voted against the installation of security cameras. He encouraged ASG members to talk to their constituents about any concerns or ideas regarding the possible new security measures.

As the meeting came to a close, Cinquino made a final call for any constituent comments. Student Manny Soares, ’21, voiced his concerns on the potential security cameras. He explained that he believed security cameras should only be placed outside of dorms.

“We need to be very clear on when the cameras can be utilized and when they can’t be utilized.” Soares said. “My biggest fear as a person of color is that they would only be utilized to further incriminate people of color.”

Following this, ASG finished the meeting with adviser announcements. The meeting adjourned at 7:31 p.m.