Carr Hall, the environmental science hub of Allegheny College, is turned into the Masterchef kitchen every Monday and Wednesday afternoon as first-year students develop their culinary skills and collegiate intellect.

Designed to introduce first-semester students to college, the First-year/Sophomore Program 101 courses offer 35 different areas of focus, ranging from sharks to media to natural resources. “You Are What You Eat,” taught by Eric Pallant, professor and chair of environmental science and sustainability and avid sourdough bread enthusiast, focuses on both domestic and international food culture.

“You Are What You Eat” is a study of what people around the world eat and why they eat it, according to the description on Allegheny’s website. Yet students do more than just research historical and contemporary foods across numerous cultures — they have the opportunity to cook as well.

While the course focuses on teaching elements of cooking, the underlying goal of educating students on how to be successful in college is still in full effect. Students began with learning to make bread, something Pallant is well-known for, and then expanded further into full meals and international delicacies.

“I like cooking, I like teaching cooking and I like teaching other people that they can cook more than they knew that they could,” Pallant said. “What I didn’t know before I started teaching is that the other things would come like learning how to speak in public when they describe what it is they made, or how to do research when they have to go figure out where their food came from. It accomplished all the things that we want for first-semester freshman, and we get to eat.” 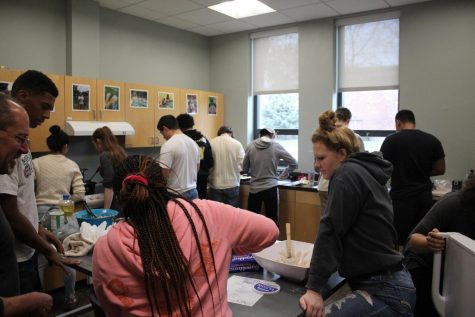 Emily RiceStudents in the FS 101 course “You Are What You Eat” cook Rome-based dishes forPresident Hilary Link during her visit with the class on Oct. 30, 2019, in Carr Hall.

“I’ve learned things that I didn’t even know (before) — how to make bread and yeast, and (I learned) different parts of Italian culture that I didn’t know before, which was pretty cool,” Veliz said.

Cheyenne Wilson, ’23, experienced home cooking throughout her life, but wished to further develop her cooking abilities while also enjoying herself.

“I chose this (class) because I really like food, and it’s pretty common in my family,” Wilson said. “I really like eating food and it sounded interesting. This class has taught me more about food than before.”

Ritchy Froehlich, ’23, selected this course to learn more about other cultures.

“If you’re interested in food and learning more information about additional cultures outside of the United States, it’s a great class to take,” Froehlich said. “It’s why I personally took it. I really enjoyed the cooking aspect of the class and learning more about the culture.”

Not every student in the class was a beginner in the kitchen. After having Pallant recommend it to her at an overnight visit, Morgan Libell, ’23, enrolled in the course because it enticed her the most compared to the others.

“Cooking is like a recreation for me, so it’s relaxing, so I took it as it would be a nice, relaxing class to take compared to the rigor of the other (courses),” Libell said.

One assignment in the class focused on the difference between Americanized and authentic international food. To show students this difference, Pallant took them to a local example: Taco Bell.

“I wanted people to recognize what the relationship is between Taco Bell, which claims it’s Mexican-inspired food and what the food really is of Mexico,” Pallant said.

The assignment, which was to write a restaurant review of Taco Bell, was accompanied by another assignment to determine the “real” foods of Mexico to compare and contrast the two.

“It was different than what we’ve experienced before, but it made sense in the course, and it honestly made us really think about the different types of food and how Taco Bell really isn’t Mexican food,” Libell said.

The class had the chance  to serve President Hilary Link a lunch consisting of traditional foods from Rome. After meeting with Link in the summer, Pallant was able to arrange for her to visit his class.

“I hadn’t planned that stage of doing food of Italy, but she (had) just come from six to seven years in Italy, (so) I thought, ‘OK, we’re going to do food of Italy if you’re willing to come to class,’ and she said OK,” Pallant said. “A couple weeks later, she said, ‘Can we just do the food of Rome?’ So we narrowed down to just the food of Rome because Italy’s food is quite varied, and she agreed back in August and came when we asked her.”

The students were thrilled to have the opportunity to be able to serve the president of Allegheny a Rome-inspired lunch.

“It was an honor,” Froehlich said. “It was an honor to meet her and just to serve her, and it was very interesting learning everything she had to say about Italy. I learned a lot.”

Through several hands-on learning experiences, the goal of the class has always been to broaden students’ willingness to experiment, according to Pallant. He compared trying new things with cooking and eating to the college experience, which is new for his students.

“That’s what I want people to do when they come to college — try things you didn’t think you would try before you came to college out of high school because you didn’t even know they existed,” Pallant said. “Now if you’re willing to try things that you never heard of, then maybe you could do the same with a history class or a com-arts class, or a philosophy class.”