A burst of flavor 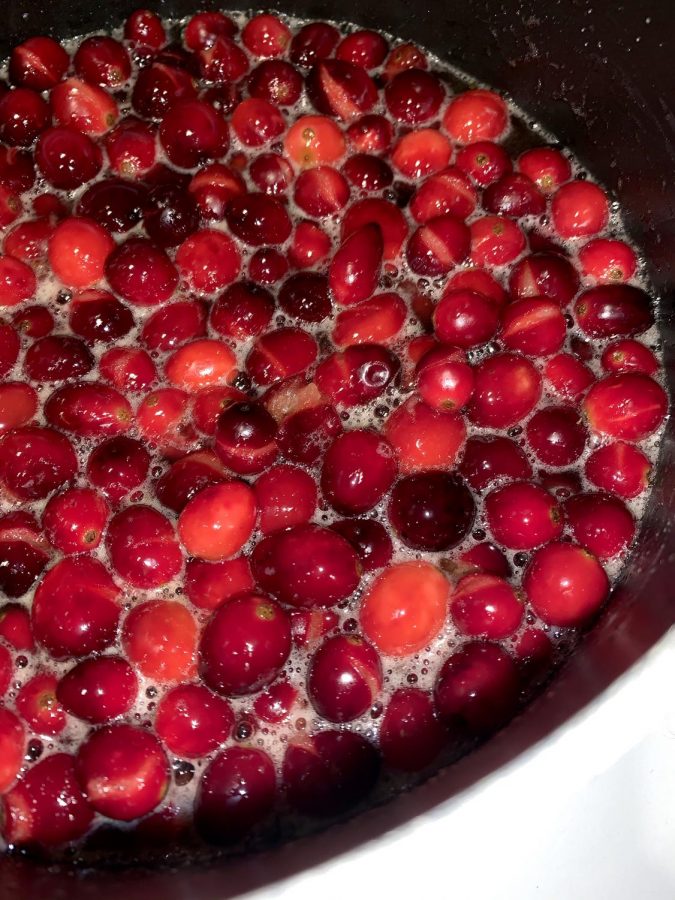 It’s time to get lost in the sauce — cranberry sauce is the palette cleanser of Thanksgiving.

If you think about it, turkey, stuffing, mashed potatoes, green bean casserole, yams, corn, pumpkin pie and gravy are all in the same flavor family. Having so many foods tasting so similarly allows for fatigue and lack of will to cross the finish line into the clean-plate club during Thanksgiving dinner.

But one side dish combats the entire Thanksgiving dilemma; cranberry sauce.

Cranberry sauce is tart, sweet, unusual and, most importantly, diverse from the Thanksgiving menu.

Some consider it a condiment, others a relish, but I think it is truly a side dish all on its own. Thanksgiving just wouldn’t be the same without it.

As Thanksgiving is to “The Office,” cranberry sauce has unrightfully developed into the Kevin of the day since the holiday’s first celebration in 1621.

However, recently with brands like Bath and Body Works and Sheetz using cranberries to their advantage to make fall-themed scents and post-Thanksgiving leftovers into gas station cuisine, cranberries have developed into a fall favorite.

I’m excited for this newfound cranberry revolution establishing new uses for its scent, flavor and texture.

While I have always had a love for the sauce, I’ve noticed more and more of my cousins have grown to appreciate the canned jam over the years as they’ve entered adulthood.

I think this says a lot about the dish. It is mature, bold and elegant; not something that just anyone can take on in their youth. This requires people to get into the right mindset when preparing to indulge in the sauce and explains why cranberry sauce is usually only a favorite for older generations.

While many discount the role of cranberry sauce and think its place on the menu is obscure, it really is the underdog that saves Thanksgiving time and time again.

Now that I have acknowledged the importance of cranberry sauce in the Thanksgiving meal, I am embarking on a task that’s uncharted for me (a mere recreational kitchen dabbler) — I will be making homemade cranberry sauce.

The recipe I’m using is a hybrid from The Food Network, All Recipes website and my mind:

A pinch of salt

A pinch of pepper

In a saucepan over medium heat, dissolve the sugar into the orange juice and water. Stir in cranberries — reserve about ½ cup of cranberries for later — and let them soften for 10 minutes. Increase the heat until the cranberries start to pop or burst. Lower the heat and stir in the reserved cranberries. Add the salt and pepper to taste and prepare to serve. As the sauce cools down, it will thicken.

I entered this endeavor cautiously, as I had never attempted to make anything like cranberry sauce before.

Surprisingly, though, it was much easier than expected.

Seeing the process of the cranberries boiling down into the thick mixture made me appreciate the beauty of cranberry sauce even more.

After letting the cranberry sauce cool in my refrigerator for an hour, I finally gave my very own sauce a taste test.

The taste was tart and sweet, tame yet exciting, a familiar flavor, but new at the same time.

While I won’t criticize Ocean Spray or other competing canned cranberry sauces, my homemade delicacy was more than I could have imagined, allowing for a menagerie of flavors to fill my mouth.

At this Thanksgiving, I will be serving my homemade cranberry sauce to friends and family. Meanwhile, I encourage you to consider the cranberry. Give it another try. Think of it as the refresher for the meal that allows you to open up your dessert stomach and power through that last slice of pumpkin pie.