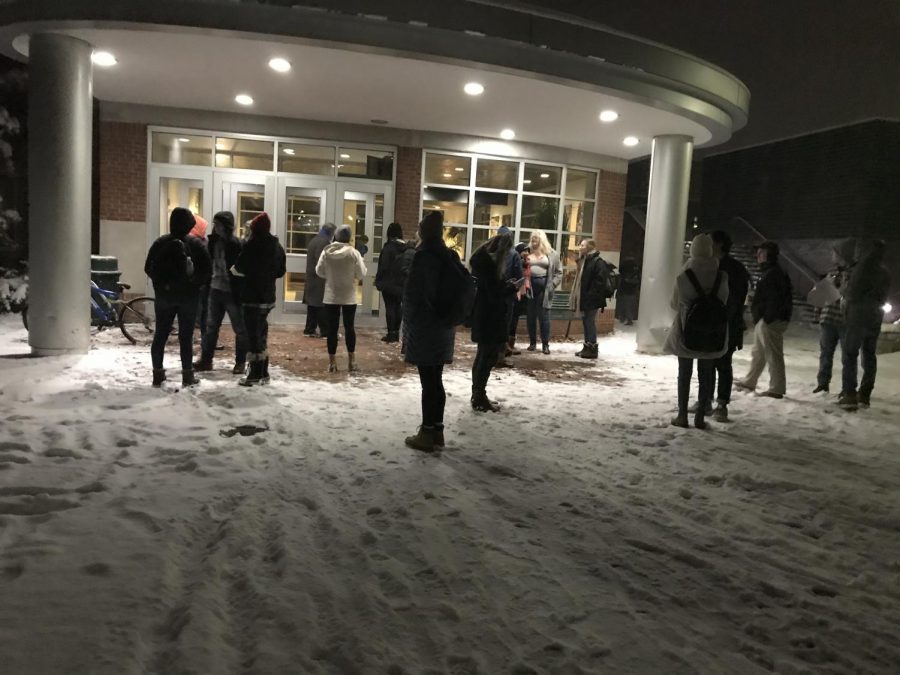 This week, a fire alarm forced members of Allegheny Student Government to stand in freezing temperatures for over 10 minutes, a brief delay of the full agenda ahead of them on Tuesday, Nov. 12 in room 301/302 of the Henderson Campus Center.

Beginning with cabinet reports, the Allegheny College Birding Club’s constitution was approved pending a second vote next week. Once up and running, the club will feature birding trips, bird identification research and conservation activities.

Ben Blackburn, ’21, and Ashley Leonard, ’20 — two students from a political science class with Assistant Professor of Political Science Andrew Bloeser — in conjunction with the Student Coalition for Labor, presented a resolution to make an addendum to the current Statement of Community to be more inclusive of college workers.

“And then, (we also want to add) the phrase ‘diversity, trust, equality’ and ‘contributions that all workers make through their labor.’”

The group has already received written letters of support from several groups on campus, including College Democrats, Workers United Union, Foodservice Workers Union and the Administrative Advisory Committee, according to Leonard. The group also received about 200 signatures in support of their petition to add to the Statement of Community. Attorney General Brandon Zabo, ’20, said that ASG will consider voting on the resolution next week.

Another resolution was presented from President Jason Ferrante, ’20, who delivered the resolution for Director of Diversity and Inclusion Taylor Marzouca, ‘20, who was absent from the general assembly.

The resolution calls for Allegheny College to declare the second Monday of October “Indigenous People’s Day.”

Senator Quinn Broussard, ’22,  who also serves on the Council on Diversity and Equity, explained the need for the resolution.

“As it currently stands, Allegheny College does not recognize Indigenous People’s Day or Columbus Day,” Broussard said. “(Allegheny) is just neutral at this point. However, we as a committee find that a neutral stance is unacceptable. … That’s why the resolution is being proposed, … to celebrate indigenous people and their culture.”

In her vice president’s report, Elyse Cinquino, ’20, said that there were 150 responses to ASG’s textbook price survey. Among the most popular solutions, Cinquino said, were more course packets from faculty as well as the ability to purchase earlier and cheaper editions of textbooks.

Cinquino also said that she met with Library and Information Technology Services to discuss the books that are being transitioned out of the library. Cinquino indicated that books are being transitioned out based on a nine-point process that determines whether a book has been in circulation in the last 10 years, and assured the assembly that only books that people have not used may be removed, and the process may take up to the year 2021.

Cinquino also discussed the worry among students that printer points from last semester did not roll over to this semester. She quoted a policy that has been in place but never followed until this semester.

LITS will not enforce the policy next semester as the change was without student notice.

In the president’s report, Ferrante said that the Major Concert Genre Survey had 333 responses and that the artist, when selected, will remain a secret until official announcements are made.

Ferrante also spoke about the college’s snow removal plan. He said that he will get a copy of the plan to review, and indicated the snow removal priority areas, including the campus center and Brooks Dining Hall.

In new business, a large conversation arose about the level of vandalism on campus.

“Vandalism this year is worse than it has ever been, in my experience of four years at Allegheny,” Ferrante said.

“Doors are being broken, locks are being ripped off, bollards are being stolen,” Ferrante said. “This is where Physical Plant is at: one, they can no longer absorb this cost. Campus improvement projects cannot proceed due to the level of vandalism on campus.”

These projects include painting and restroom and lounge renovations.

“Work orders are taking a long time to get closed this year, partially because Physical Plant has to address the vandalism first,” Ferrante said. “When you throw wads of toilet paper at the wall, someone from housekeeping has to clean that up. It’s not respectful to them.”

A discussion then began about solutions to the vandalism. Some senators, such as Bennett Westfall, ’23, suggested a hall-wide fine which is allowed under the housing agreement. Emma Zurowski, ’21, suggested that the violators are directly fined.

“I think having a floor-wide fine would be a terrible idea,” Tart said. “It’s really easy to maneuver around the halls. … If I live in one hall, I can easily go to another hall and destroy something because I know this hallway would be fined.”

According to Ferrante, other measures, including individual hall meetings and campus-wide emails from Residence Life are not working.

“We know that community fines often hurt the same people who are impacted by (the vandalism),” Ferrante said. “It’s not fair all the time, but it is in the housing agreement, and it’s part of the process. Tell people that campus improvements won’t go forward if we continue to have this vandalism.”