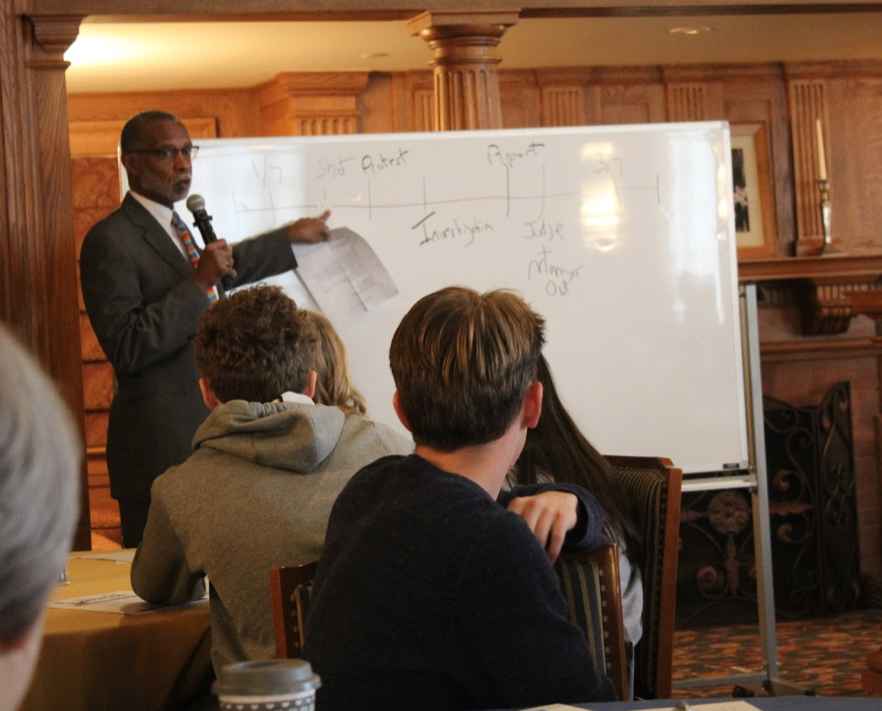 Each year, the college recognizes public figures who demonstrate civility throughout their career or at a critical moment through its Prize for Civility in Public Life. National winners have included former Vice President Joe Biden and the late Senator John McCain, as well as Supreme Court Justice Ruth Bader Ginsburg and the family of the late Justice Antonin Scalia.

Along with the nationwide prize, there is also an award for public figures in Pennsylvania. On Sept. 23, President of Allegheny College Hilary Link awarded the Prize for Civility in Public Life in Pennsylvania  to the four chairs of the Pennsylvania Criminal Justice Reform Caucus, including Senators Art Haywood and Camera Bartolotta, and Representatives Sheryl Delozier and Jordan Harris.

Haywood, serving the 4th senatorial district of Pennsylvania  — the first prize recipient to ever visit Allegheny College — gave a talk on Student Civic Advocacy at 12:15 p.m. Friday, Nov. 8, in the Tillotson Room at Tippie Alumni Center at Cochran Hall. The program was hosted by the Office of the President and the Center for Political Participation. Senator Haywood was introduced by Brian Harward, Robert G. Seddig Chair in Political Science and Director of the CPP.

“President Link is out of the country on college business today, or she would be here to offer her own expression of appreciation to each of you for coming,” Harward said. “Senator Haywood is most deserving of (the Civility Prize) and we are indebted to his service and public leadership. … We hope this will be one of many opportunities for us to examine civility in public life, rather than simply — though importantly — recognizing those who reflect those principles.”

Haywood represents parts of Montgomery and Philadelphia counties. He is the democratic chair of the Health and Human Services Committee and sits on the Appropriations, Finance, Intergovernmental Relations and Judicial Committees. He is also the co-chair of the Criminal Justice Reform Caucus.

Haywood has sponsored and cosponsored bills regarding public education, economic development, single-payer healthcare, clean energy and gun violence. He has also advocated for raising the minimum wage and introduced a resolution in the Pennsylvania Senate calling for a House impeachment inquiry into the Trump presidency.

Haywood graduated as a Marshall Scholar from the London School of Economics at Morehouse College and went on to attend University of Michigan Law School.

“Thank you all here at Allegheny College,” Haywood said. “I’m very honored to receive the civility award. This is a conversation about how individuals, young people as well, can get involved with the political system. … How can we turn public will into public policy?”

Haywood began with the lessons learned from the Black Lives Matter protests in Ferguson, Missouri, where in 2014, Michael Brown was shot and killed by police officer Darren Wilson. Haywood outlined the timeline of events following Brown’s death.

In August 2014, when Brown was killed, the African American community represented more than one-third of Ferguson; meanwhile, only one out of seven served on the City Council.

Following the shooting of Brown, violent protests erupted in Ferguson. In March 2015, the United States Justice Department released a report listing Constitutional violations that Ferguson had committed. The Attorney General’s Office released complaints about the city’s low level offense fines financing the city and its race-based policing. These reports resulted in a municipal judge and the city manager resigning. A consent decree forced the City of Ferguson to improve its policing practices.

After the 2015 election, the representation of African Americans in City Council became three-sevenths.

“This is not a standard example of how to move public sentiment into new policy,” Haywood said. “In fact, it’s very unusual that, in a protest movement, you will get elected individuals to resign.”

Haywood emphasized that he does not condone violent protests as a mechanism for social change. He introduced Maryland State Representative Vincent DeMarco’s “Six Steps to Effective Advocacy Campaigns” framework with a short video. Following the video, Haywood detailed DeMarco’s steps with the example of domestic violence.

“For many individuals, when they’re in a position of being a victim of domestic violence or sexual violence, that is a time in their lives where the chances of being hurt or killed are high,”Haywood said. “In Pennsylvania, there have been a number of organizations that have organized to take guns away from individuals who have a protection from abuse order against them.”

Haywood noted that, even when a victim has a PFA, they can still be in danger. As a result, groups like Moms Demand Action have advocated for removing guns from those who have PFAs for domestic violence against them. Haywood said that Moms Demand Action seemed to follow DeMarco’s guidelines in advocating for legislation.

The first step is creating an evidence-based policy plan. This involves research — studies and expert testimony aided with anecdotes.

“(Moms Demand Action) had research to show that, even when a victim has a PFA to protect them from harm, they can still be subject to injury,” Haywood said.

The second step involves polling data to indicate whether or not the public will support the change in public policy. Moms Demand Action found that between 82 and 88% of the public supported disarming those with PFAs against them, according to Haywood. Even individuals who owned guns, about 80%, were highly supportive of the policy.

“If you want to take guns away from individuals, then it’s important to speak with the gun owners to see if you can get them on your side,”  Haywood said.

Haywood said that a broad, statewide coalition is necessary to get legislation passed. Moms Demand Action did just that by expanding throughout the State of Pennsylvania and lobbied with their state senators.

“If someone from Crawford County contacts me and says … ‘we want you to support a piece of legislation,’ do you know what I’m going to say? Call Senator (Michele) Brooks,” Haywood said. “She represents you, not me. … I’m accountable to the 250,000 people (of my district) … I’m not accountable to the 13 million Pennsylvanians. Moms (Demand Action) understood that.”

Step three requires media coverage. To achieve this, Moms Demand Action utilized the “common sense” slogan that garnered attention from public figures like Governor of Pennsylvania Tom Wolf. Parkland high school students, Haywood added, also utilized media in the aftermath of the February 2018 shooting at Marjory Stoneman Douglas High School. He said that they created a culture where doing nothing is considered unacceptable.

The fifth step is making the policy an election issue. On issues like the minimum wage, Haywood said, this step proves difficult. Since 2009, the minimum wage in Pennsylvania has stagnated at $7.25 an hour.

“Raising the minimum wage has not reached the point of being an election issue,” Haywood said. “One of which someone could win or lose their position in the state legislature by taking a position. Since it has not become an election issue, (we have had) significant challenges in getting it moving.”

“Whatever those people want (in the first photo), we’re going to pay attention to them because there’s (300 to) 500 of them,” Haywood said. “The Vinny DeMarco approach does work.”

During the question and answer session, Taylor Marzouca, ’20, indicated that gun reform is not being addressed urgently enough. She asked how much special interest groups such as the National Rifle Association limit the process.

“Everything is contested,” Haywood said. “There are a lot of competing interests, … some organizations have built a significant amount of interest over time. … How much power these organizations have is not fixed. … In Pennsylvania, Moms Demand Action has more membership than the National Rifle Association, and that’s new. Their influence, I think, will grow over time.”

Haywood said that the challenges for new organizations include creating a statewide network and being consistent in their demands for change. He also said that most social change takes about 20 years, like the Civil Rights Movement which lasted from about 1954 to about 1968.

“When I entered the state legislature in 2015, I told my friends, ‘I think we can start winning on gun violence prevention in 15 years,’” Haywood said. “My (observation) is that it’s going much faster than I anticipated. … My core message is that even though (the NRA) has a lot of strength, it appears that their strength is declining and that (the strength of) Moms Demand Action is increasing. The key thing is the continued perseverance and the pace of change is always too slow.”