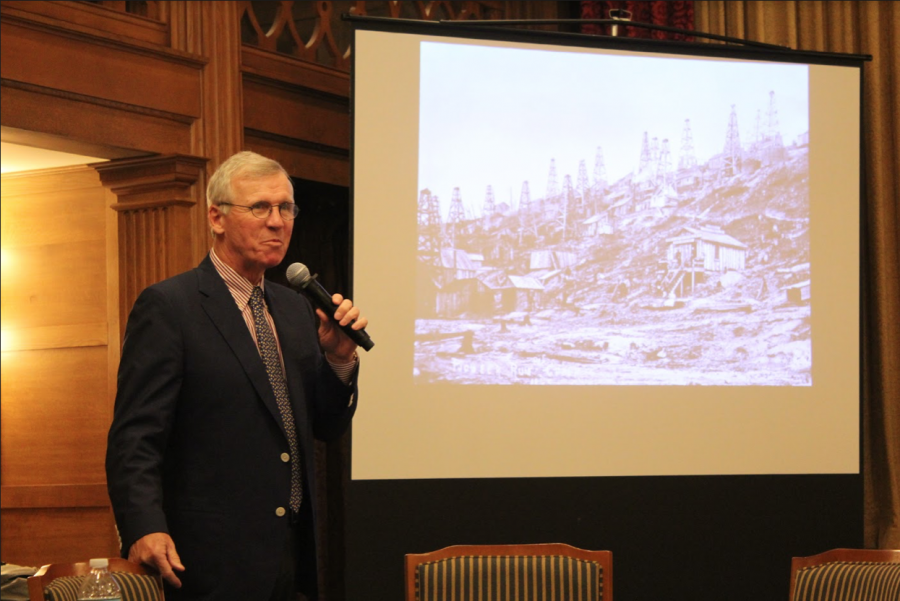 Charles Fountain, Professor of Journalism at Northeastern University, talks to students and community members about Allegheny alumnus and famous muckraker Ida Tarbell on Nov. 4 in the Tillotson Room at Tippie Alumni Center at Cochran Hall.

Charles Fountain, Professor of Journalism at Northeastern University, the second  high-profile journalist Allegheny College brought to campus this year, delivered a lecture, “Ida Tarbell: ‘Impact and Echoes,’” on the eve of Tarbell’s 162nd birthday, Monday, Nov. 4 in the Tillotson Room at Tippie Alumni Center at Cochran Hall. He was introduced by Hannah Schaffer, ’20, a fellow for the Center for Political Participation.

“This evening, we are lucky enough to have Charles Fountain from the Northeastern School of Journalism,” Schaffer said. “After graduating from Boston College, Fountain attended the Columbia University School of Journalism before beginning his successful career in the field. Fountain has written for and appeared on many outlets, including The Boston Globe, ‘USA Today,’ ESPN, NPR and many others.”

During his career, Fountain served as a sports anchor in Massachusetts and a sports reporter for ABS radio in New York. Fountain has also written four books, including “The Betrayal: The 1919 World Series and the Birth of Modern Baseball,” which was named one of the best books of 2015 by the The Boston Globe.

Fountain’s talk centered on Ida Tarbell, the famous muckraker and journalist who graduated from Allegheny in 1880.

“You’re probably wondering, after hearing that introduction and hearing a litany of sports (experience) here: what is this guy doing, presuming to come from Boston into our community to talk of one of our own?” Fountain said. “Believe me, I’m a little nervous about all of this.”

Fountain indicated that he taught a class in journalism history about Ida Tarbell and the muckrakers. He said he had been content with the knowledge he had of her, but that all changed when he and his wife bought a home on Chautauqua Lake four years ago.

“I came to the Chautauqua Institution, and a whole new world opened up for me,” Fountain said. “Part of this world was the discovery that Ida Tarbell, this muckraker that I knew well, was a part of Chautauqua’s history.”

This piqued Fountain’s curiosity, so he came to Meadville in the summer of 2017 to learn more about the famous muckraker.

“I came here and met Jane Westenfeld (research and instruction librarian and special collections librarian), and we spent a couple of days going through … Ida Tarbell’s papers,” Fountain said. “It is a vast and rich collection. … As I learned more about Ida Tarbell, I made a connection that I should have made long before.”

Fountain’s connection was to Walter Robinson and Matt Carroll, two reporters from The Boston Globe who broke the story about the clergy sex abuse scandal in the Roman Catholic Church in the early 2000’s. Fountain said he traced this back to the investigative journalism of the Watergate scandal to the muckrakers of McClure’s Magazine, a popular periodical in the early 20th century that Tarbell wrote for.

“We are forever affected by our childhood,” Fountain said. “Our childhood is what shaped us and what forever shapes us.”

Fountain explained that Tarbell was born on a farm in Erie County and grew up in Rouseville and Titusville, where her father Franklin Tarbell was forced, due to financial troubles, to work in the American oil industry.

He then read a selection from Tarbell’s autobiography where she described the oil derricks from her childhood.

“‘No industry of man in its early days has ever been so destructive of beauty, order, decency than the production of petroleum,’” Fountain read. “‘All about us rose derricks, squatted engine houses and tanks. The earth about them was streaked and damp with the dumping of pumps, which brought up regularly the sand and clay and rocks through which the drill had made its way. … If the well flowed, every tree, every shrub, every bit of grass in the vicinity was covered with black grease and left to die.’”

Fountain added that, along with the observations Tarbell made about her hometown, it was women who built the schools and churches in Rouseville.

“To Ida Tarbell, that was an awakening and an epiphany,” Fountain said. “It was the women who made the community, and she never lost sight of that fact.”

The Tarbells frequented Chautauqua Institution, which was a Methodist camp when they lived in Titusville, more than a 50-mile journey. Fountain said the Institution would shape her education.

Tarbell grew up reading newspapers from New York. She also read the Police Gazette, which covered stories of the oil fields in Western Pennsylvania. She wanted to be a scientist, reading the works of Charles Darwin and facing a dilemma between her Methodist faith and her scientific knowledge.

“All intellectual curiosity, a coming of age, a brilliant and ultimately seminal American mind,” Fountain said. “Tarbell understood that she wanted to be an educated woman, and she wanted to be able to make her way independently.”

Tarbell never married, a decision that she made in high school. Originally planning to go to Cornell University, Tarbell was visited by the president of Allegheny College.

“With some urging from her parents, Ida Tarbell came to Allegheny (as) the only woman in her (matriculating) class,” Fountain said. “Allegheny was once very different from the one you know and very much the same. I imagine it looked very different. There were only about three buildings when Ida Tarbell was here. Tarbell came to an Allegheny … that nurtured her and challenged her, that shook her convictions and opened up that love she had for learning and intensified it. … In that way, I suspect that Allegheny has not changed much in the last 140 years.”

Tarbell began her career after Allegheny as a school teacher but did not enjoy it. She was hired in the mid-1880s by Theodore Flood, the publisher of The Chautauquan, a monthly magazine of the Institution that was read by tens of thousands of people. Tarbell wrote annotations for the required readings of the literary and scientific circles of The Chautauquan. Fountain said that Tarbell lived in constant fear of making a mistake because of the academics who read the paper.

“She was a fastidious researcher, shades of what was to come,” Fountain said.

Tarbell also wrote feature articles for the magazine and became the de facto managing editor, commissioning articles and editing them.

At the end of the 1880s, Tarbell left The Chautauquan for Samuel McClure’s new magazine, McClure’s. It was here that Tarbell spent two years covering Standard Oil and John D. Rockefeller.

“It did not take long to decide that the woman who grew up amidst the oil boom of the 1870s would be the person to write that story,” Fountain said.

The first story was published in November 1902, running in 18 parts through the end of 1904. Fountain added that Tarbell’s work on Standard Oil ranks among the most influential in 20th century journalism, behind only stories like Watergate and Rachel Carson’s “Silent Spring.”

“It led to the Supreme Court decision leading to the dissolution of Standard Oil, but it also led to our collective understanding of John D. Rockefeller,” Fountain said.

Fountain said that, at the time, Rockefeller was the gold standard of wealth and that he was not a good person.

“The reason that we can collectively say that, a century after Rockefeller’s death, is because of Ida Tarbell’s series,” Fountain said. “The first (part of her series) laid the groundwork for investigative journalism to follow. The echoes are still being heard today in journalism. (Tarbell) followed the paper trail. Standard Oil was probably the most sued company in American business history. … Tarbell looked at the court records and transcripts … (and) coupled this with interviews, but the basis of the series was document-based.”

Fountain said that Tarbell’s document-based reporting still holds up today, more than a century later, due to the credibility of Tarbell’s reporting.

“It was a big money-maker for McClure’s Magazine, that America couldn’t get enough of John D. Rockefeller doing bad things to good people,” Fountain said. “We like to see famous people get their comeuppance.”

Tarbell only saw Rockefeller once, Fountain noted, when she was able to visit his church in Cleveland.

“Tarbell stared at Rockefeller the way somebody might stare at a painting, looking at every nuance,” Fountain said. “What she came away with was a most unpleasant picture. … She ascribed everything that Rockefeller did in his life to the worst and ugliest motives, that (with) his charities — sure he gave a lot of money away — but as a Christian, he didn’t come close to tithing or giving 10% of all of his wealth.”

Fountain said that Tarbell’s reporting led to a series of court rulings and the breakup of Standard Oil in 1909.

Ida Tarbell continued to write throughout her life and spoke as part of the Chautauqua Circuit, a traveling show with performers, art, literature and political speakers. Tarbell, though she lived through the suffrage movements of the 20th century, refused to join them.

“Here was a woman who was the quintessential professional woman,” Fountain said. “She was probably, in those decades, the most influential, best-known, most accomplished woman in America.”

Fountain said that this was due to her insistence that women can either be professionals or homemakers, and that too many women becoming homemakers would not be good for society.

“We wrestle with the inconsistency between the accomplished professional woman and the one who pushed equal rights for women away,” Fountain said. “It’s one of the things that make (Tarbell) the fascinating historical legacy that she is.”

Brian Harward, Robert G. Seddig Chair in Political Science and Director of the CPP noted that, though Tarbell was an Allegheny alumnus, the community does not know much about her life.

“This completes a picture for me (of Ida Tarbell) that had been incomplete,” Harward said.