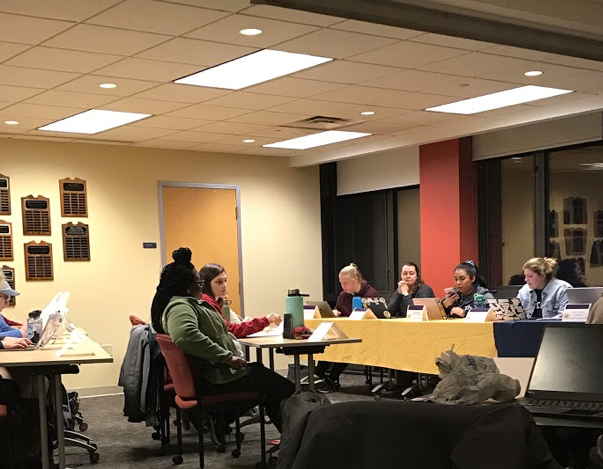 Allegheny Student Government votes on the funds for the Wise Center Renovations during general assembly on Tuesday Nov. 5, 2019.

Announcements and decisions were made as tensions rose during Allegheny Student Government’s weekly general assembly meeting.

Since there was no guest speaker, general assembly began with cabinet reports at 7:03 p.m. Tuesday, Nov. 5, in the Henderson Campus Center room 301/302.

Director of Communication and Press David Roach, ’21, began his report by announcing a joint committee project being completed between Roach and Attorney General Brandon Zabo, ’22.

“We’re going to be making a sort of flow chart for ASG,” Roach said. “(It will be) sort of what we can do for students and how the flows of power and structure go for us, like what we oversee, how we can help people and sort of where we go from talking to your senator to impacting a benefit of change.”

Roach also gave an update on the video involving Chompers promoting the Loop and a few updates on the website.

After Zabo, Chief of Staff Jared McHale, ’20, updated ASG on the latest College Committees Council meeting, which included the possibility of having a salutatorian for Allegheny’s senior classes.

“I also met with Academic Standards and Awards committee, and they have ideas about adding a salutatorian to the way that the college recognizes academic students, so they want ASG to have a discussion on that,” McHale said.

Senators were urged by President Jason Ferrante, ’20, to think about that, as the proposal would be voted on by ASG at a later date.

The next report came from Co-Director of Student Affairs Kelsey Evans, ’20, who announced the official hiring of a Public Safety Director for the Office of Public Safety.

“For public safety, we have a director, which is very exciting,” Evans said. “His name is Jim Basinger. He was the first candidate that was on campus (on Thursday, Oct. 3). … He’s really excited to engage with students and ASG, specifically across campus, and he will be starting in January.”

After a few more cabinet reports, ASG moved into class reports, which all focused on upcoming events and, for the class of 2021, plans to increase the mental health initiative on campus.

During his president’s report, Ferrante thanked everyone for helping with Blue and Gold Weekend and brought up the possibility of narcan being available on campus.

“We are talking with the Wellness Committee about the possibility of having narcan on campus, specifically for our public safety officers,” Ferrante said. “For those who don’t know what that is, it is an opioid reversal drug, so if you’re having an overdose, you spray it up your nose and it temporarily reduces the effects of an overdose.”

Additionally, Ferrante discussed the planned formation of Student Success Microgrants to be available for students to use in case of an emergency. If, for example, someone who lived in California had a grandmother who passed away and did not have the money to get home, the grant would give them that money, Ferrante said.

Ferrante also announced that “Talk About It Tuesday” will be starting again in the campus center lobby.

Moving into unfinished business, ASG once again discussed the request from the Athletics and Recreation Department for additional funds from ASG to help renovate the Wise Sport and Fitness Center weight room.

Ferrante announced that at this meeting, the request would be brought to a vote after discussion, and senators would vote on whether or not to provide the full or partial funding. Ferrante began that discussion with an email from Bill Ross, director of athletics and recreation, that addressed some previous concerns from senators and constituents.

“He has three points,” Ferrante said. “One, we do not intend to return to ASG every year for money.It would only be if, and only if, there was a request from a large amount of students that we are not prepared to address otherwise. … Two, we will continue to equip the weight room to the best of our ability using funding that is made available. Anything that ASG would like to contribute towards this funding would be greatly appreciated. This project sort of caught us off guard. … Three, if ASG would like to wait until the (end of the) academic year and see what’s left in reserve, I am OK with that.”

While the rules of the tie were being determined, the discussion became so heated that Ferrante had to use the gavel to quiet the room.

“There is decorum to be maintained at these meetings,” Ferrante said.

Cinquino reminded the room that the meeting was also on a live stream.

ASG Advisor Gretchen Beck added that this was not the last time ASG would have to talk about this matter.

“I understand that there’s a lot of feelings about this in the room,” Beck said. “And I get that there are people with all sorts of different opinions. You voted for ($8,000) tonight, that’s fine. If you feel that there is more necessary, you have the rest of the semester, and you have all of next semester too. So this is not your only option, you have other options. Don’t think of this tonight as all or nothing.”

Following this, ASG ended the meeting with the rest of the unfinished business, and advisor announcements. The meeting was brought to a close at 8 p.m.