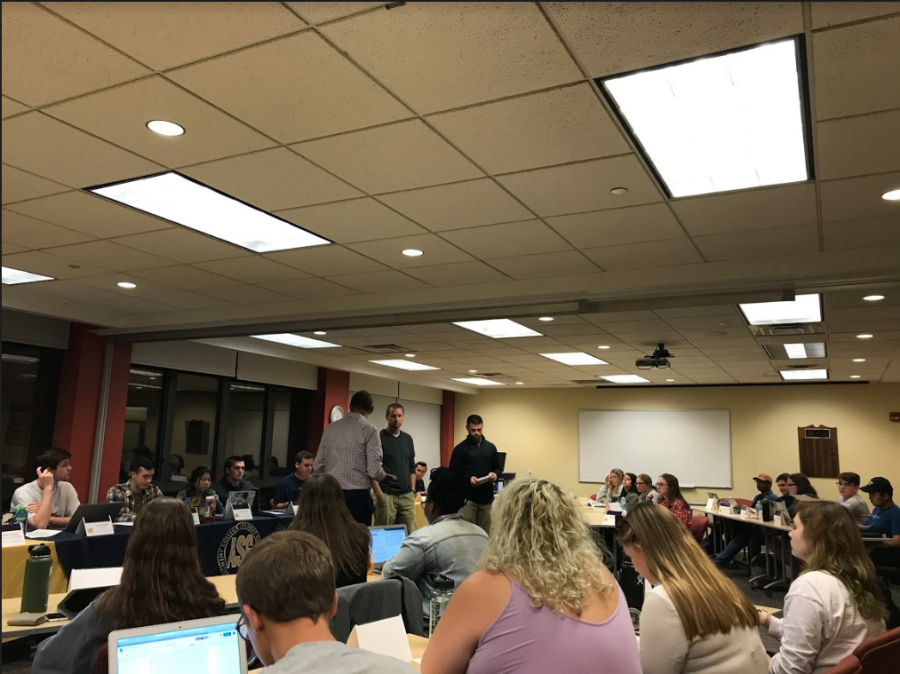 Bill Ross, Jared Luteran and Chris Van Alstyne talk to Allegheny Student Government and answer questions regarding the need for funds from ASG to help renovate the David V Wise Center during general assembly at 7 p.m. in Tuesday, Oct. 29, 2019 in the Henderson Campus Center.

The weekly Allegheny Student Government general assembly — for the second week in a row — lasted over an hour, with guest speakers and business as usual.

The general assembly was held at 7 p.m. on Tuesday, Oct. 29, in room 301/302 of the Henderson Campus Center. It opened with a presentation by Bill Ross, director of athletics and recreation, Jared Luteran, director of recreation and facilities and Chris Van Alstyne, director of peak performance and fitness.

They discussed the current renovations of the Wise Sport and Fitness Center, including the addition of a two-story weight room and cardio room in two of the existing racquetball courts, which have now been taken offline for construction. The current auxiliary weight room will be reverted to a racquetball court. Their primary request was $12,700 from ASG to purchase additional equipment.

Ross said that this led to the hiring of Luteran to dedicate a staff member to recreational programming for the entire student body.

“When we added a strength and conditioning faculty position 5 years ago and started having scheduled time for our varsity athletes in the weight room, that created some angst and some lost time for general students to get in and utilize the weight room,” Ross said.

The existing auxiliary weight room is inadequate for usage by the student body, some of whom may be uncomfortable exercising with an entire varsity team, Ross suggested.

“We want to make sure that we have very similar pieces of equipment and apparatus that are in the current weight room in the new weight room,” Ross said. “That is why we are here, asking ASG if they would help us fund that.”

Ross indicated that construction of the new weight room costs $360,000, and it falls under the campus master plan. This includes $30,000 for flooring, and the equipment that has already been purchased has cost between $30,000 and $40,000.

“We want to make sure that this is not only an adequate facility but also a very nice facility,” Ross said. “There are some equipment needs that we simply do not have the money for … Before we open the doors to that weight room, we would love to be able to have it fully equipped.”

“If we don’t have enough money to fulfill the shopping list, we’ll go as far as we can until we can come up with more money,” Ross said.

Luteran added that all of the equipment currently housed in the auxiliary weight room will be moved to the new weight room, but the new space is double the size.

Ross emphasized that, once the space is completed, strength and conditioning staff will be able to schedule team lifting sessions more efficiently.

“If we can get rid of the problem (with) a space that’s just as big, or actually bigger, then we can keep the athletes in one area,” Van Alstyne said. “At the same time, it’s going to open up more space in the larger fitness center.”

Director of Finance Trevor Day, ’20, asked when in the project athletics realized the need for the funds. Ross said that they always knew the need but did not have the “shopping list” until Van Alstyne, who was hired in September, created it.

“That $12,000 is to replace everything so you guys have the same amount (of equipment),” Van Alstyne said. “If we don’t want all new (equipment), if we’re happy with what we have, then we can obviously go lower on that. But, that means there’s going to be a lot more sharing, and that’s the whole goal that we’re trying to avoid.”

All of the cardio equipment in the Wise Center is leased for three years, Ross said. Each year, there is some old equipment that is traded in for new equipment.

The flooring is scheduled to be installed by Nov. 25, and Luteran hopes that the new space will be open at the beginning of next semester.

Some discussion arose regarding how additional funding could be raised, such as fundraising from alumni. Ross indicated that the Golden Gator Golf Outing helps to raise additional funds for athletics.

President Jason Ferrante, ’20, encouraged senators and cabinet members to ask their constituents what they think about the proposal. Several senators rose concern over timeline, and Ferrante said that ASG will not make a decision for several weeks.

During regular cabinet reports, Ryder Sullivan, ’22, was appointed as an ex-officio for the communications and press committee. Pamela Marquez, ’22, and Balnur Yerezhep, ’23, were appointed to the study away and campus internationalization committee.

Director of Community Relations Gabby Miller, ’20, said that on Monday, Nov. 11, her committee will be holding a community conversation on campus with students as a precursor to an in-town dialogue on Monday, Nov. 18, between Allegheny College and Meadville at the Unitarian Universalist Church.

In his president’s report, Ferrante reminded the assembly that a form was published on MyAllegheny that asks students to rank their top genres for the major concert in the spring. Voting is open until Nov. 13. The results will be used to help ASG and the Major Events Committee, as well as their booking agent, find potential artists for the spring event.

Ferrante also reminded the assembly about Blue and Gold Weekend festivities. The activities kick off today at 12:15 p.m. with a pep rally in the campus center lobby. There will be a carnival from 8:30 to10 p.m. tonight in the campus center lobby after Battle of the Muses. On Saturday, the student cheering section at Robertson field will return after a few years of being dormant, complete with gator clappers and a T-shirt giveaway.

“A couple of years ago, we had the swamp,” Ferrante said. “If you go to the University of Pittsburgh, they have the ‘zoo.’ This is like a similar thing, but for a school that’s 10 times smaller.”