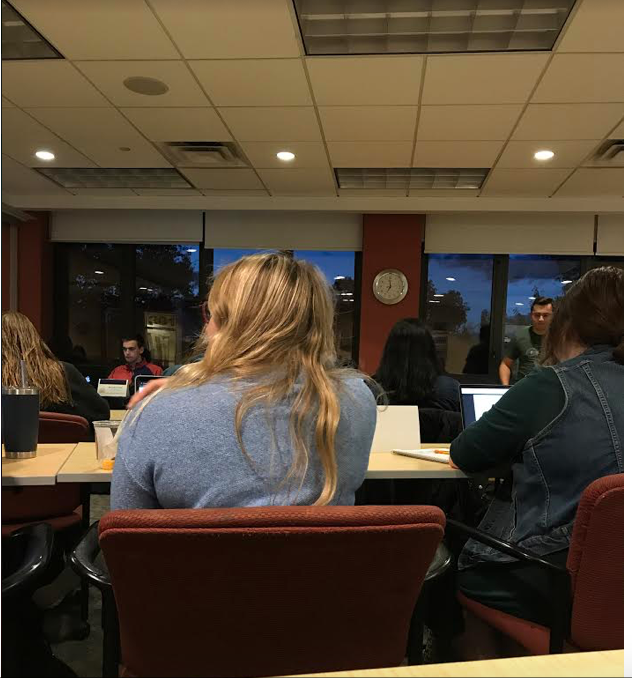 Allegheny Student Government’s general assembly meeting lasting for over an hour was not the only unusual occurrence Tuesday night.

ASG held its weekly general assembly meeting at 7 p.m. Tuesday, Oct. 22 in the Henderson Campus Center and welcomed Associate Dean of Students for Community and Belonging, justin adkins, as a guest speaker.

“Over the summer things kind of shifted,” adkins said. “Joe Hall got a fabulous job in Cleveland, so he left. And when (Hall) left his job got blown up, and parts of it landed on what is now my new job.”

adkins explained that parts of the student conduct process have now become part of his position. adkins has been working with Dean of Students April Thompson on what he called “a restorative justice process.”

adkins explained that the new restorative justice process came from matters students and ASG voted on and asked for last year regarding student conduct. Another part of adkins job is looking at belonging on Allegheny’s campus.

“I’m also looking at belonging, and what that means at Allegheny,” adkins said. “There’s a lot of student affairs research that says one of the things (that improves) retention and your academic performance is if you have a strong sense of belonging in the school that you go to. … So pretty soon, I’m going to begin working here with students on what can increase (their) sense of belonging at this institution.”

adkins presented the academic standards and non-academic standards from last year, and then went into detail about the new restorative justice policy and how it works. Included was the new framework and the referral process.

“A lot of people will talk about how public safety or their RA ‘wrote them up,’ but we don’t have write ups at Allegheny,” adkins said. “What we really have is referrals. It’s a referral for a conversation, based on what was observed.”

According to adkins, referrals are only reported after incidents, and sometimes the reported incidents did not occur exactly how they are stated in the referral.

adkins used the example of a student urinating on the gator in the Gator Quad.

Using a flow chart to help show how the new student conduct and community standards process works, adkins explained conversations between the person accused and the Dean of Students Office, and how disciplinary warnings worked.

“A lot of people struggle to understand the difference between disciplinary warning and probation,” adkins said. “A disciplinary warning is a note in your record that stays for a specific amount of time. It means you are still in good standing at the college. It does not get reported externally, and sometimes, but not often, we may decide to talk to your guardian, your parents or your advisor.”

adkins added that probation means that a student is not in good standing with the college, and the majority of the time the parents and advisors are contacted.

One of the other significant changes to the community standards policy included agreement letters and the ability to reach an agreement between the student and adkins’s office.

“(Usually) you can come in and we can reach some sort of mutual agreement,” adkins said. “But if we don’t, it goes to a hearing … If it looks like it’s just going to be a warning or probation, then the hearing will be of a panel of your peers.”

After taking a few questions from the room, adkins ended his presentation with a discussion of the new location of The Compass, and the goals that the office hopes to achieve through the new policy.

Director of Communications and Press David Roach, ’21, discussed the upcoming promotion of the Loop, involving Chompers.

“We’re going to be working with College Relations to do a promo for the Loop with Chompers,” Roach said. “So Chompers is going to ride the Loop, and or any CATA lines, which is really exciting. So keep an eye out for that, and if you are a person of 5’6” stature or taller, we are looking for someone to be Chompers.”

“We brought up again the discussion about the United Methodist Church and the college’s interactions with that,” Marzouca said. “We spoke also about the master planning agenda. A lot of students got to attend focus groups with the architects, and that was really helpful for them.”

Marzouca added that CoDE sent out a resolution to the administration about recognizing Indigineous People’s Day over Columbus Day, along with the creation of a calendar for cultural events on campus.

A few reports later, Co-Director of Student Affairs Genesis Pena, ’22, reported on the arrival of the feminine products dispensers.

“The feminine products have come in, finally, and the machines have been ordered, so we’re just waiting on that,” Pena said.

Following cabinet reports, the class of 2020 reported on a few of their upcoming events, including Operation Christmas Child and a celebration of the December 2019 graduates.

In his president’s report, ASG President Jason Ferrante, ’20, thanked everyone for helping during President Link’s inauguration, and reported on the latest Board of Trustees meeting, which included the fact that Allegheny’s retention rate is up over 4% from last year. Ferrante also reminded the room of the upcoming Blue and Gold Weekend and Gator Day.

During new business, Ferrante brought up the renovations to the Wise Center, which include getting rid of the racquetball courts and turning the weight room into a two-floor weight room.

“Athletics and Recreation has put a lot of money into the project, and they are now coming to us for a total of about $10,000 to go towards that new room and equipment for that room,” Ferrante said.

Following the discussion about the renovations the meeting closed at 8:12 p.m.