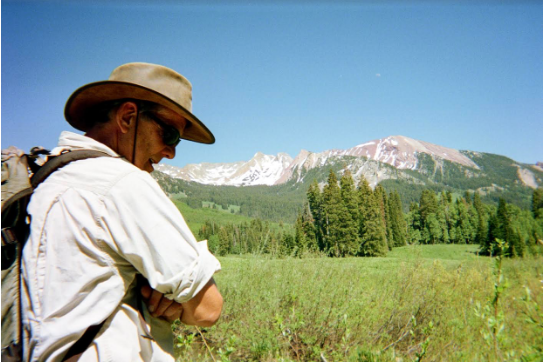 Professor Emeritus of Biology and Environmental Science Scott Wissinger stands in a field during research in summer 2019 in Colorado.

As students spend their four years at Allegheny College, some of the largest impacts on them over that time are made by professors. For many, one of those professors was Scott Wissinger, professor emeritus of biology and environmental science.

Wissinger’s impact on the college extended past students to include other professors, according to Ronald Mumme, professor of biology.

“(Wissinger) was a lot of the reason why I was attracted to the job at Allegheny,” Mumme said. “He was such a generous friend and colleague all the way through. He was really important in showing leadership in the biology department.”

From the time Mumme joined Allegheny in 1990, Wissinger had been “the guy next door.” The two had shared lobby space outside of their offices since Mumme’s first year — and working directly beside Wissinger made him vulnerable to several practical jokes, Mumme said.

“(Wissinger) was just a really fantastic scientist, and just a fun person to hang out with,” Mumme said. “(He) just loved practical jokes.”

Two years after Mumme began working at Allegheny, Richard Dudley, ’92, began his Senior Comprehensive Project, for which he had to use dozens of small, but heavy, tiles. While the tiles piled up around the office after Dudley left, Wissinger decided to use these “Dudley tiles” for one of his practical jokes.

“(Wissinger) has the bright idea where if you walked out of your office for a while, he’d come in and sneak a bunch of them into my backpack,” Mumme said. “I couldn’t figure out why my backpack was so heavy, and then … I’d find two or three of these ‘Dudley tiles’ in it.”

The tiles would appear in his backpack throughout the day, and Mumme said he doubted he would ever forget Dudley because of it.

Grace O’Malley, ’20, and Kira Yerofeev, ’20, two of Wissinger’s Senior Comprehensive Project students, said they, too, often found themselves the recipients of Wissinger’s pranks.

When Wissinger and his students were working with salamanders in spring 2019, he decided to buy a plastic salamander.

“It looked exactly like the ones we were collecting,” O’Malley said. “He would put it out in the field, put it in buckets, somewhere in the lab to look like it’s crawling away.”

When students would see the salamander, Yerofeev said, they would dive for it, afraid that one of the amphibians had somehow managed to get loose in the field or lab. The salamander was so convincing, though, that Wissinger ultimately pranked himself — having forgotten where he had put the plastic salamander, Wissinger once dove toward the plastic toy to stop it from escaping.

While Wissinger enjoyed practical jokes, the “friendly, inclusive” atmosphere he cultivated also came from how deeply he cared for his students and colleagues, according to O’Malley.

“He’s the guy you want in your corner because he’s there supporting you academically, professionally and, most importantly, personally,” O’Malley said. “If you need anything from him in any aspect of school, personal life (or) the future, he’s your go-to guy.”

Yerofeev said she found that same level of support in her relationship with Wissinger.

“He was one of the first professors I felt believed in me,” Yerofeev said. “I didn’t have any confidence that I could be an actual scientist, and then (Wissinger) came into my life and helped me realize I’m way smarter than I think. He opened so many doors for me, and he honestly still is. He really cared about us in our personal lives and our academic lives.”

Wissinger impacted his students, including O’Malley, Yerofeev and Kylie Wirebach, ’20, on and off Allegheny’s campus.

Wirebach said her first time living in Colorado for summer research, at first felt “terrifying,” since she had never been farther west than Pittsburgh, and had never worked in the type of altitude she found herself living in for several weeks. While he was hiking with his students, Wissinger was also telling them stories of mountain lions in the area, according to Wirebach. Her fear subsided, though, when they reached a cliff and began to eat lunch.

“I was trying not to think about how high up we were,” Wirebach said. “After lunch, (Wissinger) got up and walked us over to this big pile of snow. He got up to the top of this hill, and then he slid down, and then he said, ‘Alright, here we go.’”

After that, the entire group began sliding down the snowy hill, Wirebach said. Some used sampling trays as makeshift sleds, while others, like Wissinger, slid down on their feet. One of the most memorable moments, according to Wirebach, was when Wissinger slid almost halfway down the hill, then fell and rolled the rest of the way to the bottom.

The memory left an impression on Wirebach because she felt more confident and comfortable throughout the rest of her research — instead of reassuring her that he knew she would do well, Wissinger chose to show the students how to mix a work environment with a fun one, Wirebach said.

“It’s hard to capture the enormity of how it feels to describe (Wissinger),” Wirebach said. “I think loving his work and loving the people in his life came naturally to him. And he did it well.”

Along with serving as a mentor to his students, Wissinger also influenced faculty at Allegheny, including Professor of Biology Matthew Venesky.

“(Wissinger) had a calming presence in the classroom and with faculty,” Venesky said. “It was one of those things where if students were stressed out … or if faculty had things going on, he would come into the room, and the stress levels, without him even saying anything, … went down. He had an incredible knack for quickly saying the right thing.”

When Venesky first joined Allegheny faculty, it was Wissinger who encouraged him to pursue broader avenues with his research and fields of study. Wissinger, according to Venesky, was skilled at looking at the bigger picture in his research.

“That really opened my eyes to thinking about ecology very differently, so it was nice to be able to have a collaborator who added to the way I thought about the world and the way it worked,” Venesky said.

Assistant Professor of Environmental Science and Sustainability Casey Bradshaw-Wilson said Wissinger had been her mentor because their positions, a combination of biology and environmental science, were similar. The position allowed Bradshaw-Wilson to work closely with Wissinger.

“We always joked that I was becoming the new (Wissinger) because I essentially took his position over,” Bradshaw-Wilson said. “At the same time, he took me under his wing and molded me before he retired.”

Bradshaw-Wilson agreed, stating, “there was no hidden agenda with (Wissinger).”

Not only did Wissinger help mold his younger co-workers, but he molded both current and former students. Leah Franzluebbers, ’18, was another student chosen to work with Wissinger in Colorado.

“I owe so much of who I am and where I am to (Wissinger),” Franzluebbers said in a written statement. “Most important was the way he actively encouraged me to branch out into interesting, unrelated biology. (Wissinger) relished in being a student of the world, and in encouraging his students to do so as well. I will miss most his indefatigable spirit, the boundless joy he brought with him to everything he did, whether it was a class lecture or a meeting with a student. (Wissinger) truly cared about his colleagues and students, and it showed in his fierce advocacy for anyone who needed his help.”

Serving as a department chair in both biology and environmental science, Wissinger was “incredibly generous” with his time, serving both faculty and students, according to Mumme.

“(Wissinger) has been such a champion, not just of the biology department and environmental science, but of Allegheny,” Mumme said. “(He was) a huge supporter of everything we do at Allegheny. … He was such an inseparable part of (the college) that it’s really hard to come to the realization that he’s not with us anymore.”

In an email to the Allegheny community, President Hilary Link talked about Wissinger’s connection with the college, as well as the impact he left behind.

“We cannot express the enormity of loss and sadness we feel at this time,” Link said. “(Wissinger) exemplified the legacy of excellence across the areas of research, teaching, mentorship, professional engagement, and intellectual inquiry … (Wissinger’s) contributions to his students and the broader Allegheny community are immeasurable. We are grateful for his exemplary life and know his work, ideas, and commitment will forever impact Allegheny.”

Provost and Dean of the College Ron Cole, in a statement to The Campus, expressed that Wissinger was “such a vibrant part of the Allegheny community,” and mentioned the importance of his role as a mentor to students. In a statement on its Instagram page, Allegheny Student Government reiterated that Wissinger had an immense impact on the lives of many students, particularly as an adviser to those completing their Senior Comprehensive Projects.

Students and peers remember Wissinger as a lead researcher in his field, whose near-chronic proclivity toward pranks and “dad jokes” made him as entertaining as he was intelligent, Wissinger offered invaluable support to those around him and, according to Yerofeev, will always be “irreplaceable.”

“He just really embodies what all of us at Allegheny aspire to be — really good students, good colleagues, good friends,” Mumme said. “He’s everything we want to be here.”