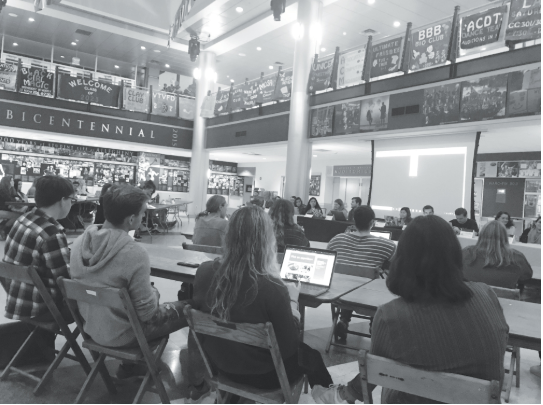 ASG hosts its weekly general assembly in the lobby of the Henderson Campus Center on Tuesday, Oct. 8, 2019.

In an effort to reach a wider audience of constituents, as well as to allow the Department of Art to use Allegheny Student Government’s regular meeting space, ASG held its weekly general assembly meeting at 7 p.m. Tuesday, Oct. 8, in the lobby of the Henderson Campus Center , with free cookies.

Members of ASG were also encouraged to “bring a buddy” to general assembly to increase constituent participation with ASG.

During cabinet reports, Gabby Miller, ’20, director of community relations, said that her committee has reached out to the local organization My Meadville to potentially co-facilitate a town hall event to discuss relationships between Allegheny College and the City of Meadville. Miller also presented a video about an upcoming application for the Meadville Calendar, which showcases local events in Meadville. Additionally, Miller informed the general assembly that the builders of the app are looking for a group of Allegheny students to help add Allegheny events to the calendar.

“The Green Students of Color Society will empower students of color to explore the interdisciplinary avenues of the environmental science and sustainability major, and eventually pursue careers after their time at Allegheny College,” Zabo said.

The Green Students of Color Society’s constitution was unanimously approved pending a second round of approval during ASG’s next meeting.

During Jared McHale’s, ’20, chief of staff report, two new committee members were approved: including Shula Bronner, ’22, to the Curriculum Committee and Gabrielle Susoiu, ’22, to the Diversity and Inclusion Committee. McHale also reminded the assembly of the descriptions and functions of each committee, which can be found on ASG’s website.

Kelsey Evans, ’20, co-director of student affairs, said that student retention is up.

“The retention rate has increased 4.2% since last year, according to (Provost and Dean of the College) Ron Cole,” Evans said. “The retention rate goal was to increase by 1.5% over five years, so admissions is really happy with the percentage.”

Evans also said that there has been some vandalism around campus, as noted in an Oct. 5 email to students from April Thompson, dean of students, and Evans encouraged anyone with information to let Thompson know.

Director of Sustainability Cat Lord, ’20, brought up the possibility of restarting a dining committee.

“In cabinet, we talked about vegetarian and vegan options and the overall quality of (Brooks Dining Hall) night-by-night,” Lord said. “We can cover whatever people are concerned about.”

President Jason Ferrante, ’20, added that the dining committee of last year helped to instate the spice racks in Brooks and McKinley’s Food Court, as well as the made-to-order sheets at the Grille in Brooks.

In his president’s report, Ferrante said that he spoke with Lord and Kelly Boulton, sustainability coordinator, to extend the momentum from the Climate Strike into action. He specifically stated the possibility of divesting the college’s endowments from all fossil fuels. Fossil fuels currently make up about 3% of the college’s endowment, Ferrante said.

To close the general assembly, Ferrante made a statement regarding the recent passing of Professor Scott Wissinger.

“Professor Wissinger was a mentor to many, an excellent teacher to more,” Ferrante said. “(He) hired pretty much all of the biology department. He had been here for about 40 years. This is a time where a lot of people are hurting on this campus; please reach out to your friends, check on them, don’t forget about the 24 hour line, and take some time if you need it during this very difficult time.”