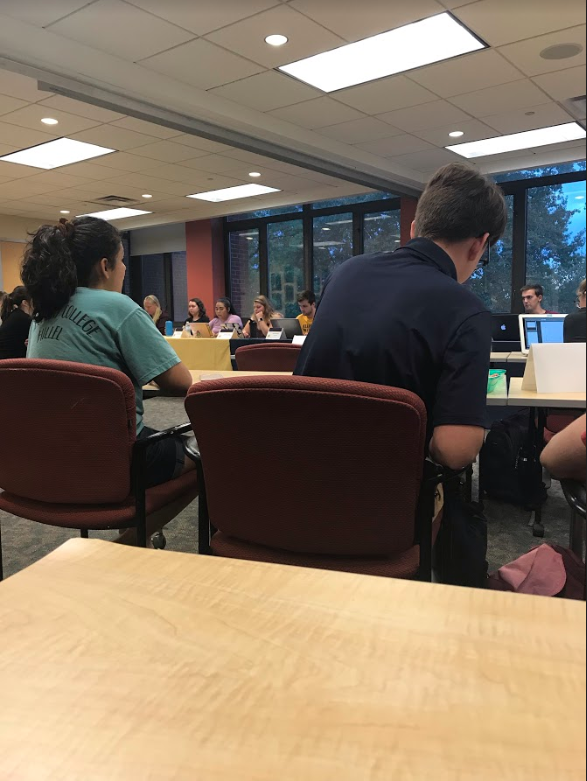 ASG welcomed Yeckley at its meeting that began at 7:01 p.m. Tuesday, Oct. 1, in the Henderson Campus Center. Yeckley’s presentation was focused on the new 24/7 Crisis Line.

“I was asked to come in and talk about some new changes coming to the counseling center, mainly the new crisis line,” Yeckley said. “One of our big additions this year that we want everyone to know about is the addition of 24/7 mental health resources. Any time, day or night, summer breaks, (if students) study abroad, this is available, day or night.”

Yeckley described the main features of the crisis line, including that it is for all students, and that faculty, staff or a student’s parents can call in for a student if needed. They added that the purpose of making the crisis line 24/7 was mainly to decrease the time that students had to wait to get an appointment with a counselor.

Yeckley also discussed the counseling center’s new step care model for students, in which a student would have an initial assessment and then be put into a certain therapy group depending on what the counselors thought best for them. This addition, plus the crisis line, has already increased the number of students using the campus’s mental health resources, according to Yeckley.

“By Monday at (5 p.m.) we had already seen 136 students,” Yeckley said. “I think last year at this time, it was around 88. So there has been a definite increase. It is working.”

Additionally, Yeckley said the Counseling and Personal Development Center is working to have more of a campus presence, and have more preventative measures put in place across campus for students who need them.

After Yeckley’s presentation, ASG moved into its regular business, beginning with cabinet reports.

During his report, Attorney General Brandon Zabo, ’22, reported that Allegheny’s Relay For Life requested to change its name to Allegheny Against Cancer.

“(Relay for Life members) told me that when people hear ‘Relay For Life,’ they just think of running, and people aren’t interested in that,” Zabo said. “So that’s why they wanted to change to Allegheny Against Cancer, (to help gain interest).”

Following Zabo’s report, Jared McHale, ’20, chief of staff, brought three new names to the table for the Campus Life and Community Standards committee during his report. McHale also discussed his first meeting with the College Committees Council, which included reports from Council of Diversity and Equity, the finance committee and curriculum committee.

“The curriculum committee is looking at helping the English Department, which is working on changing the major,” McHale said. “They also want to streamline the process for students to get distribution requirements from transfer credits, so that will hopefully be coming next year.”

The next report came from Co-Directors of Student Affairs Kelsey Evans, ’20, and Genesis Pena, ’22, who focused on the Loop schedule, the search for a new director of public safety and feminine hygiene product dispensers.

“(The Loop) is really going to focus on staying on schedule, and (we’re looking into) redoing or fixing the route schedule,” Evans said. “So look for those coming soon. We will also be tabling in the campus center about that.”

Evans also discussed the search for the director of public safety.

“The search for the (new director of public safety) is happening, we’re in the midst of it,” Evans said. “The first person we’re meeting with is coming to campus on Thursday, (Oct. 3), and there will be a dinner for students to come and sit with and meet them.”

Pena added to the report, explaining that the feminine hygiene dispensers have been approved for the bathrooms in the campus center, and plans are being finalized.

“(Wednesday, Oct. 2) is the DeHart Dinner, which is the local dinner with local markets in honor of an (environmental science) professor who passed away about 17 years ago now,” Lord said. “If you didn’t get a ticket, you can still go to the market that’s right outside Carr Hall from 4-6 (p.m. tomorrow).”

Following cabinet reports, the class senators gave their reports and informed the room about plans for upcoming events.

“We’ve heard some recurring concerns about lighting safety, specifically on Sherman and Henry Street,” Ferrante said. “That’s been referred to our safety committee, which is like Public Safety and Physical Plant. So they’re going to be looking into lighting around campus, and if there are any other areas that you would like them to look at please (let us know).”

Due to the absence of ASG Advisor Gretchen Beck, there were no advisor announcements, and the general assembly meeting was brought to a close at 7:45 p.m.