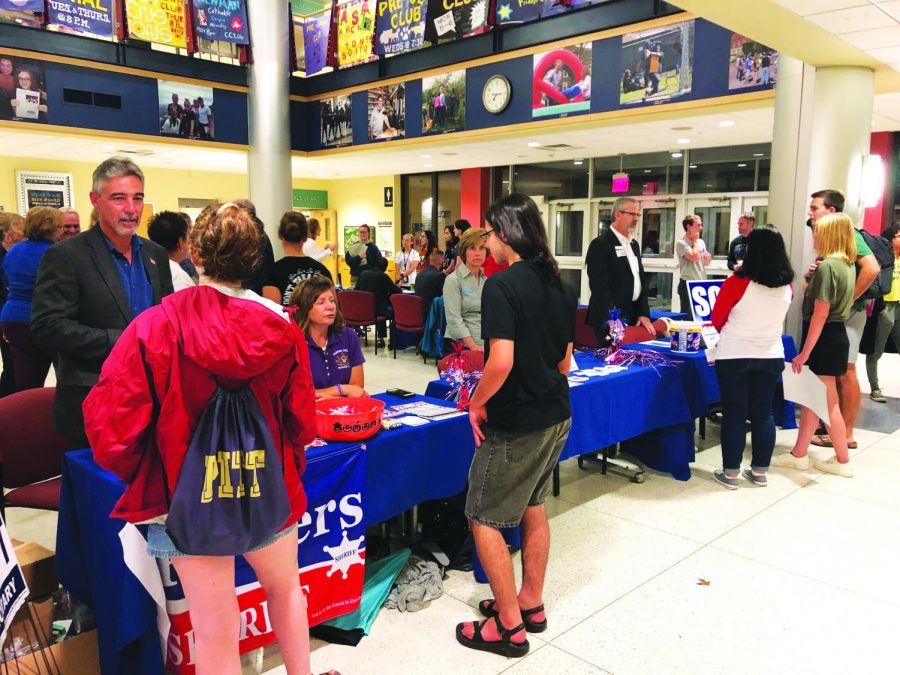 Students talk to local representatives at the local candidate forum on Wednesday, Oct. 2, 2019, in the Henderson Campus Center.

The Center for Political Participation hosted a local candidates’ forum Wednesday, Oct. 2, 2019, in the Henderson Campus Center lobby. Local candidates visited Allegheny’s campus to talk to students and Meadville community members about their platforms and, if elected, plans for office. Each candidate stood at their own booth showcasing flyers, campaign slogans and experience.

Fratus said he has been with the County Sheriff’s Office for 13 years. As Chief Deputy in the office, Fratus said he gained a better understanding of the office and as a result, is running with the hope that he can connect the office with the community.

“I feel, as the sheriff’s office, our main priority is the courts, taking care of the courts,” Fratus said. “But I think we need to be out in the community in a positive way (as well).”

If elected, part of Fratus’s plans include increasing the efficiency of background checks to help community members who are receiving them and making the sheriff’s office more available to children in the community so they are never afraid to make them feel at ease in approaching a police officer, according to Fratus.

Similar to Fratus, McKnight and Vogel are running for office with the idea of uniting communities — in their case, they hope to join together the Meadville and Allegheny communities.

Henry, owner of Meadville Area Ambulance Service, LLC, said he sees that connection between Meadville and Allegheny, since his company employs Allegheny students.

“I think it’s great because not only can you listen to kids and voters of all ages, (but) it’s important that everybody … be charged in trying to get the vote out and participate in the process,” Henry said.

Director of the CPP Brian Harward, also the Robert G. Seddig Chair in Political Science at Allegheny, helped organize the forum, which he described as an “informal meet-and-greet.”

“Students are passing through, introducing themselves (and) getting to know a little bit, not only about who the candidates are, but a little bit about what the offices do,” Harward said. “The candidates are (at Allegehny) because they recognize that there are a lot of voters here. I’m hopeful that they’ll continue to look to the college when they are campaigning, to encourage students to turn out.”

CPP Fellow Emma Godel, ’21, said she was happy with the event’s turnout, since students can have “a lot of impact locally.” Having more than just students on campus, Godel added, was another success in the event.

“I’m very excited about this, … it’s so great to see members of the community (at Allegheny),” Godel said.