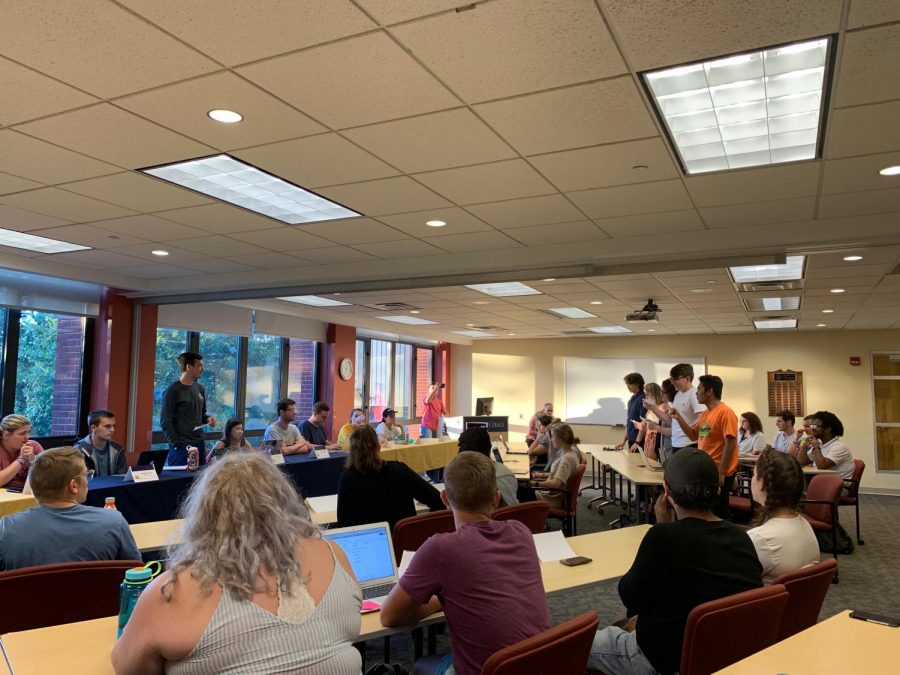 Five first-year senators are sworn into office during the Allegheny Student Government meeting on Sept. 17, 2019, in the Henderson Campus Center.

During cabinet reports, two ex-officios were approved for the Diversity and Inclusion Committee, and Chief of Staff Jared McHale, ’20, discussed the openings that remain on the College Committees Council during his report.

“I’m still in the process of recruiting people for the College Committees Council,” McHale said. “I do have a few that are interested but haven’t finished their applications yet.”

Following McHale’s report, Co-Directors of Student Affairs Kelsey Evans, ’20, and Genesis Pena ’22, reported on the continuation of the Wellness Committee and the search for the next Director of Public Safety, along with the plan for feminine product dispensers in women’s bathrooms.

The next cabinet member to report was Director of Sustainability and Environmental Affairs Cat Lord, ’20, who discussed the upcoming Climate Strike on campus.

“The global Climate Strike is (today), and there is stuff happening here in the Gator Quad, along with groups going to Erie,” Lord said. “(On campus) there will be registration and commitment signings and stuff like that, so check that out and do whatever you can to get involved.”

Lord added that the strike will be happening from around noon to 1:30 p.m. Friday.

During class reports, the class of 2020 mentioned its plan of having a donuts and coffee event during finals week.

In addition to swearing in Jonsson, the class of 2021 announced it had completed its mission statement.

The class of 2022 reported that it had officially had its first class meeting, and will continue to have meetings after general assembly, and also had finished its mission statement.

Because they had just been sworn in, the report for the class of 2023 focused on introducing ASG’s newest senators.

After class reports, Vice President Elyse Cinquino, ’20, discussed a leadership development session that will take place after the next general assembly.

“We will be doing a meeting like normal, but that part will be shortened, and then we will go over Robert’s Rules (of Order) for the first-years, and as a reminder for anyone else,” Cinquino said.

Cinquino also brought to the table the planned committee that will work on lowering the price of textbooks for students on campus.

“We did bring this up last week about trying to lower student textbook costs, so now we’re going to try and get a committee together,” Cinquino said.

Senate members were asked to raise their placards for Cinquino to know how many were interested, so plans for that committee could begin.

In his report, President Jason Ferrante, ’20, asked ASG members to sign up to help with the upcoming Wingfest along with the committee that helps run Blue and Gold Weekend.

“Wingfest is coming up sooner than you think,” Ferrante said. “We always help out by volunteering. It’s always really fun, and that is on (Sept. 28), so we will be sending out a sign-up sheet for that.”

Additionally, Ferrante made a statement about the upcoming Climate Strike on behalf of ASG.

“Allegheny Student Government fully recognizes and supports these strikes,” Ferrante said. “Students have the right to assemble and protest, and these strikes are rightfully taking action to address the imminent threats from climate change.”

During unfinished business, Director of Communications and Press David Roach, ’21, announced that he would be sending out a biweekly email the following day. Students were also encouraged to attend the upcoming home football game on Saturday, Sept. 21.

After ASG Advisor Gretchen Beck gave a few announcements to the room, the meeting was brought to a close at 7:27 p.m.