A Day of Rememberance: Allegheny holds vigil in honor of 9/11 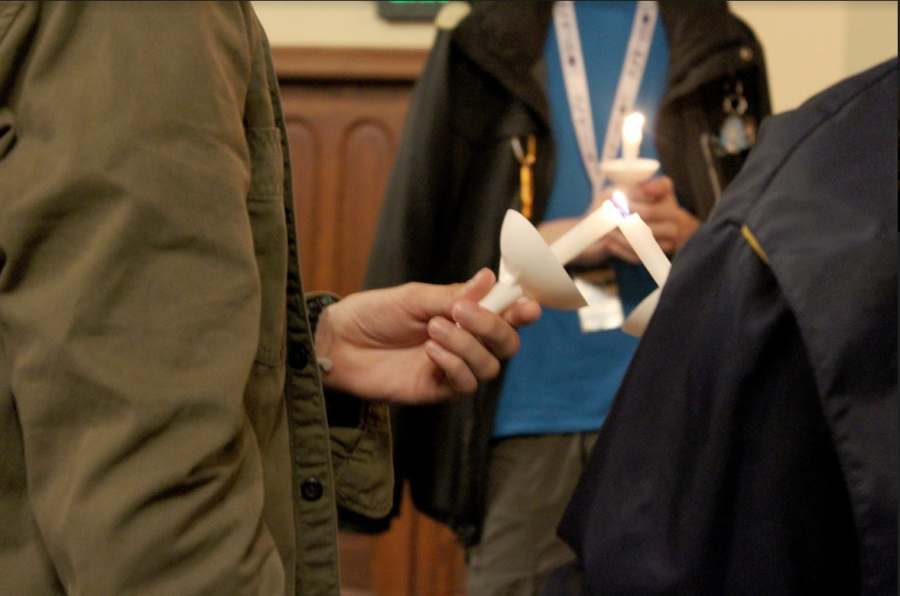 The campus community lights candles to remember the 9/11 attacks during a vigil on Wednesday, Sept. 11 in Ford Memorial Chapel.

On Wednesday, Sept. 11, six students gathered in Ford Memorial Chapel, moved from Brooks Circle due to rain, for a candlelight vigil honoring the lives of roughly 3,000 Americans who died from the terrorist attacks of Sept. 11, 2001. The ceremony was led by Chaplain Jane Ellen Nickell. Nickell asked the students to form a circle on the pulpit, where she lit her candle, and then used hers to light the candle of the student to her left, each student passing the flame onto his or her left, until the circle was illuminated.

Nickell first asked the students if they had any connections with 9/11 that they wanted to share. Some mentioned parents who worked in the World Trade Center but weren’t harmed by the attack, others mentioned relatives and family friends who were killed on one of the hijacked planes. Nickell herself shared a connection. She then asked the students to join together in silence to commemorate the tragedy. After a few minutes, she thanked the students for coming, and allowed them to stay in the space as long as they liked. When no one turned from the circle after several minutes, she asked permission to say a prayer to close. After the prayer, which addressed not only those affected by 9/11 but victims of violence everywhere, including a call to action for each individual to make the world a more peaceful place, the students blew out their candles, and some remained in the pews to discuss the significance of the event further.