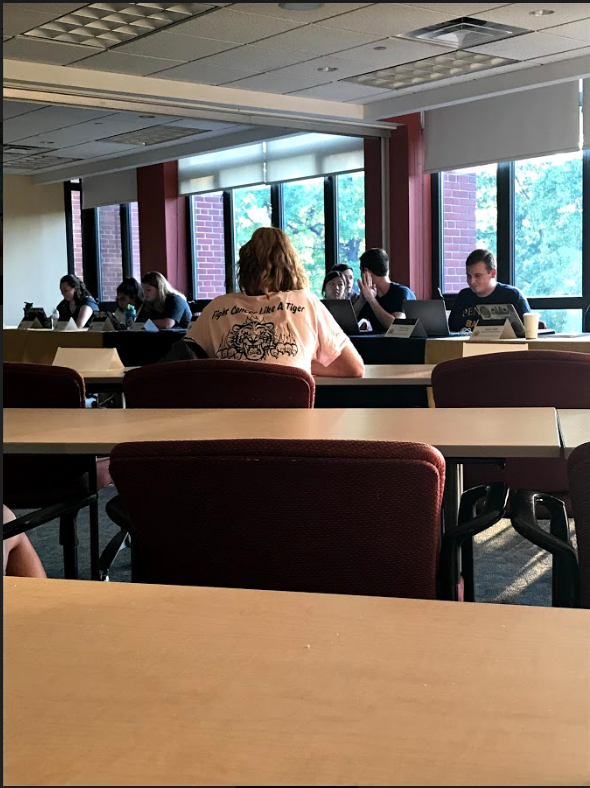 Members of Allegheny Student Government prepare for the weekly general assembly meeting at 7 p.m. on Tuesday Sept. 10, 2019 in the Henderson Campus Center room 301/302.

From the upcoming first-year elections and use of green to-go boxes to mental health on campus, a variety of subjects came into  discussion in Allegheny Student Government’s weekly general assembly meeting on Tuesday, Sept. 10.

ASG holds weekly meetings that are open to the public at 7 p.m. every Tuesday in the Henderson Campus Center, room 301/302. This week’s meeting began at approximately 7:01 p.m. with cabinet reports.

Director of Community Relations Gabrielle Miller, ’20, focused her report on collaboration with organizations in Meadville.

“I’ve started contacting local organizations, asking if they would like to collaborate with (ASG),” Miller said. “I specifically asked My Meadville … to see if Allegheny can help them, … so we’ll see.”

“First-year elections are happening (Wednesday) through Friday,” Zabo said.  “(Students running for senate) will be giving speeches right after (general assembly) down in (Grounds for Change Coffee House), and if you could come that would be greatly appreciated.”

After Zabo’s report Genesis Pena, ’22, co-director of student affairs, mentioned the continuation of looking for a director of public safety, and renovating Winslow Health Center.

“We had our first Campus Life and Community Standards committee meeting,” Pena said. “We discussed the Public Safety Director committee, and we’re moving forward with that now. (The committee has) also started the Wellness Committee, and they’re thinking of redoing Winslow, so that’s pretty cool.”

Director of Sustainability and Environmental Affairs Cat Lord, ’20, discussed a video that has been made and shared to Allegheny’s sustainability social media pages on how to use the green to-go boxes found at both McKinley’s Food Court and Brooks Dining Hall.

“Hopefully it will serve as a reminder to use the green boxes,” Lord said.

For a student to be able to use the green to-go boxes they need a token from the OZZI machine in McKinley’s Food Court to be used to trade in for a box each time.

Lord added that next week she will be tabling again for people in need of the holders for the tokens to use the green boxes.

During her report, Vice President Elyse Cinquino, ’20, discussed her work of trying to get speakers who will come to future general assembly meetings.

“I did reach out to Trae (Yeckley, director of the counseling and personal development center) and they just got back to me and said they had to check (the counseling center’s) schedule,” Cinquino said. “But they should be able to come in and talk about the new 24-hour crisis line.”

During new business, an open forum for President Link was suggested to hear her new initiatives after a speech Link gave at the latest faculty meeting.

In her announcements, ASG Advisor Gretchen Beck said that she was excited to be back as the organization’s advisor for another year.

“I find myself serving in this role again,” Beck said. “Brittany Martin was supposed to be serving (ASG) in this role this year but she left at the end of May, so I’m back to join (ASG) for another year, and I’m looking forward to it.”

In his report, President Jason Ferrante, ’20, discussed a few issues being talked about by the cabinet, including the upcoming Blue and Gold Weekend and the price of textbooks for students. The conversation then turned to mental health and resources on campus.

ASG brought the meeting to a close at 7:18 p.m. with a rousing chorus of happy birthday sung for McHale.