Club Feature: Why Not Us 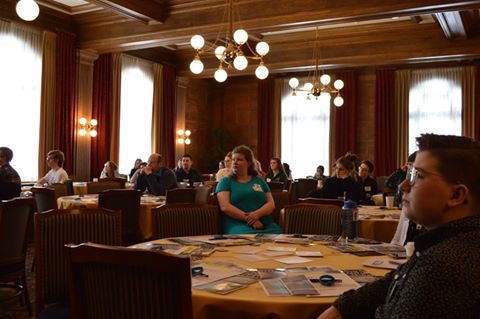 Attendants of the Allegheny Title IX Conference, coordinated by Why Not Us, on April 7, 2019, sit in the Tippie Alumni Center during the event.

When Anna Meyer, ’20, and Mark Myers, ’19, realized they found something fundamentally wrong with the culture surrounding them, they chose to push back, to fight for change — and they did it in the form of a club.

Co-President Meyer and former co-President Myers of Why Not Us were first connected through Allegheny College Title IX Coordinator Gilly Ford during the 2017-18 school year. Both survivors of assault, Meyer and Myers had already been in contact with Ford when she introduced them.

Myers had been working with Ford, he said, when he realized he wanted to reclaim what had been taken from him after his assault when he was a first-year.

“I thought that (taking part in) activism and trying to create a campus where we broke down this that (assault) is definitely something that people want to not talk about,” Myers said. “Our club, we’ve done a lot of things that … are all meant to get conversations started to get people to have a cultural shift toward consent culture.”

Similarly, Meyer said she needed to break her silence concerning her own assault and wanted to carry that feeling onto campus.

“I knew that I didn’t want to be quiet anymore,” Meyer said. “I think a big part about trauma and healing from trauma is being able to talk about it and finding the words for things.”

After Meyer and Myers connected, they decided to form Why Not Us during the 2017-18 school year as a way to give other students that voice and knowledge about consent culture. Since bringing the two co-presidents together, Ford has been working directly with Why Not Us.

“(Ford) has been a really great ally and someone who’s helped me find a voice,” Myers said.

Once the club was founded, its first big event was the Red Flag campaign, in which club members placed small red flags in the ground across Allegheny’s campus. Although Meyer and Myers wanted to hold as many large events as possible, their first full year as an ASG-official club was focused on name recognition and coalition building, according to Myers. Initially, Myers said, he and Meyer had planned to focus solely on sexual assault, but domestic and gender-based violence quickly fell under the scope of the societal problems they were addressing.

As a way to build name recognition and find a place on campus and in the Meadville community, Why Not Us reached out to Meadville Women’s Services and Alpha Chi Omega, a fraternity and sorority life organization whose philanthropy is domestic violence awareness. All three organizations have worked together on various events, and, Meyer said, Why Not Us hopes to work with the Inclusion, Diversity, Equity, Access and Social Justice Center this year.

Having other organizations, especially professionals, working with Why Not Us has been helpful at their events, Myers said.

“Given our work, people could be triggered at our events,” Myers said. “We have support there to make sure people are always safe and feel like they can participate.”

A few of the club events in which people could participate included the Take Back the Night walk and “I Ask” campaign. The Allegheny Title IX Conference, though, was an event that both Meyer and Myers said was one of the biggest and most impactful.

Why Not Us brought in different speakers for the conference. Representatives from the Audrie Pott foundation — a non-profit organization founded in the name of 15-year-old Audrie Potts, who committed suicide after she was assaulted — visited to give advice to attendants on how to make a difference on a college campus. Another speaker told his own story of assault during an “Ask a Survivor” portion of the conference.

“He acts out his story, which was an interesting spin on it,” Meyer said. “It was super intense, (I was) totally not expecting that, but I think it was really impactful. A lot of people were very moved by it.”

A panel with representatives from Meadville Women’s Services was also scheduled for the conference, allowing the Allegheny students in attendance to have a direct connection with the Meadville community.

Citing the AIXC conference as one of his proudest Why Not Us memories, Myers reflected on what the club, between its heavy workload and high rewards, had come to mean to him as he prepared to graduate from Allegheny.

“(Why Not Us) has been something I’m definitely most proud of,” Myers said. “The work is never really done, and that’s the hardest part. … I hope Anna’s going to do an amazing job with whatever she does. … I’m excited to see what people rise up in the club. We have these (students) with a lot of fire and energy.”

After Myers graduated in the spring of 2019, Tage Boggs, ’20, became the club’s co-president, along with Meyer, who remained in her position. This year, one big challenge Meyer and Boggs are focusing on is apathy. Although students clearly care about the core of what Why Not Us stands for, Boggs said, finding people who want to be actively involved in the events the club plans has been unexpectedly difficult. After a year of tabling events that “weren’t super effective,” according to Meyer, the club is planning fewer, but larger, events.

“We want to get people to care about (the club’s work),” Boggs said. “Instead of doing a lot of tabling small events, … doing bigger events, but a little bit fewer, so you really get a large turnout. (We want to) make a bigger splash.”

One such “bigger splash” event that Meyer and Boggs hope to hold is a formal dance, similar to the annual Teal Ball held by Pittsburgh Action Against Rape, for domestic violence awareness month.

However, Meyer and Boggs are not only preparing for the year ahead, but looking at the club’s future beyond their own graduation.

“For us, (our biggest goal) is to get a solid following and a kind of legacy idea because we’re graduating,” Boggs said. “Getting people to take up the mantle.”

Although Meyer has been with Why Not Us since its creation, she said she feels confident that the club will continue even after she’s gone.

“The rest of our leadership team are not seniors, which was somewhat — and somewhat not — intentional,” Meyer said. “We have a pretty strong group of juniors and sophomores that have been around one or two years now. We also have a new adviser, Emma Highland. She and (Ford) staying as a fulcrum should be helpful.”

Looking back on her experience with Why Not Us as its leader and one of its founders, Meyer said it isn’t always easy, but it is rewarding.

“As a leader in a club like this, you have to be ready to tell your story at any time to substantiate why you’re doing things,” Meyer said. “It’s very fulfilling work, even though it’s hard sometimes.”