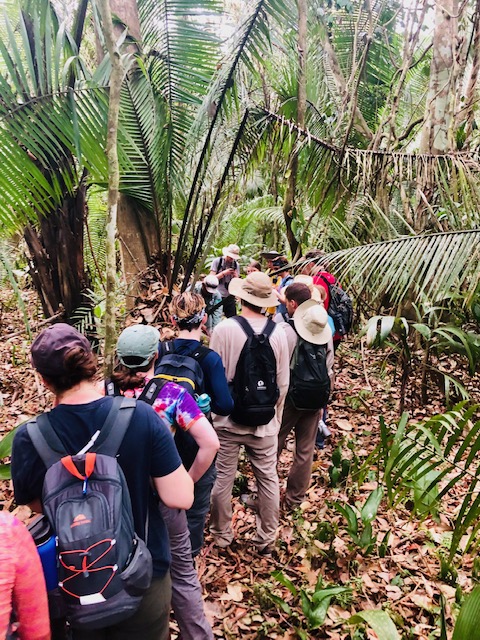 With an increase in sugars and fillers in everyday foods, many wonder if thefood in grocery stores is the same as food not found in grocery stores. For example, is the chocolate that line the racks of Giant Eagle and Tops Friendly Markets the same chocolate growing in the rainforest? This topic is one of many that Allegheny College students explored during an Experiential Learning trip to Belize this past summer.

“We had scheduled things that everyone was doing together — we had our little siesta in the middle of the day, and then we generally were having lectures, or talking to people who were visiting the lab, or talking to the people that worked there or students were off doing their own projects,” Choate said. “At the end, we got to snorkel, birdwatch and hang out at the beach.”

This was the first experiential learning trip Eckstein had lead in her time at Allegheny.

“I was approached by Beth Choate about 10 days before departure to see if I could be an additional faculty member to come on the trip, because it was clear that it might be helpful to have another faculty member go,” Eckstein said. “We wanted to make sure that the EL could still happen.”

A native of Berlin, Eckstein said the only time she had seen snakes, tarantulas and scorpions were in a zoo — and, she added, she had to face her own discomfort during the trip.

Where she saw discomforting creatures, Eckstein also saw familiar scenery. She pointed out that an episode of “Naked and Afraid” was filmed there.

“You can watch exactly where in Belize we were by pulling up ‘Naked and Afraid,’ and the episode is called ‘Eye of the Storm,’” Eckstein said.

The first of the 10-day trip was spent at a local Maya education center. Following that, the students traveled to the reservation they completed their research at. Throughout the trip, the group spent its mornings together, learning about the process of harvesting cacao before actually harvesting it.

“We spent most of our mornings either hiking or harvesting cacao,” Choate said. “We did everything from harvest the cacao, ferment it, dry it, husk it and make it into actual chocolate.”

Because it was the hottest part of the day, the afternoons were often spent swimming. Afterward, students worked on group research projects.

“(The research projects) varied from looking at bird diversity in the agroforest and the natural forest,” Choate said. “We had some students do some (geographic information systems) work, mapping out where the cacao trees were. We had several students who did work with the Hickatee turtles. There were lots of cool research projects.”

Some group projects even revolved around insects. Rebecca Montgomery, ’20, an environmental science and biology double major, did a richness, diversity and abundance index of the local insects.

“We set out little cups that the insects fell into, then we picked through them, and I identified them by order,” Montgomery said.

Montgomery said her goals included not only research, but contribution to the community through her work. Other students, such as Sydney Holler, ’19, an environmental science major and geology minor, studied the critically endangered Hickatee turtle.

Adult Hickatee turtles do not typically bask, since they are a primarily aquatic species and very rarely come up to the surface of the water

to breathe, according to Holler. However, a majority of baby turtles came up to the surface to breathe, which perplexed many of the researchers.

“The day before we left, … we got to go up and see a Hickatee turtle hatch,” Holler said. “They’re critically endangered, and that’s one of the few places that they have them, and it’s just so surreal to see that.”

“They had an agenda that they were easily able to rearrange to accommodate for different things, and there were a lot of fun activities as well,” Jordan said. “I learned quite a bit, and there was a chance for (the professors) to integrate the education into the EL, too.”

Jordan commented on the interesting relationship between the indingenous people and the land use, as well as sustainable agriculture and farming practices that contribute to environmental protection.

Most attending students said they greatly enjoyed the food. In particular, Montgomery described the freshly cut pineapple as being the greatest thing she has ever tasted.

“The woman who was the lead chef at the field station, her dream was to open up her own restaurant, so the food was so good,” Montgomery said. “They put cacao in everything — there were cacao pancakes, cacao juice, cacao jelly, hot chocolate drinks. It was so good.”

Along with food, the diverse area for field work drew environmental science major and global health studies minor Margo Beck, ’21, who has never done actual field work before and thought it would be good to experience field work in a diverse area.

“I think the trip was good in helping me figure out, ‘do I like doing field work or not?’” Beck said. “What I did was more of an observational study, and I kind of realized field work is not for me, so I know that when I’m preparing to do my (Senior Comprehensive Project), I don’t want to do a project that’s just sitting around.”

Beck said her favorite part of the trip was talking to the Maya people about their views of the United States, and their perceptions of life outside of Belize.

“I was talking to two of the women who worked in the cacao nursery, and they’re like, ‘what, you don’t have Howler monkeys in your backyard screaming every day? You don’t have iguanas and lizards everywhere?’” Beck said. “They just thought everywhere was like where they lived.”

Sticking to the itinerary, the trip went according to plan without incident, until the very end.

Beck was one of two students on the trip to catch Salmonella. In addition to the Salmonella contraction, the group almost missed their flight due to a lack of preparedness from the staff in charge of transporting them to the airport.

“On the way back we had a little bit of a hiccup,” Eckstein said. “The bus wasn’t there on time, so we may have missed our plane, so we had to take some puddle jumpers to get to the actual airport. So that was an adventure on top of the big adventure.”

Overall, the trip was well received by all who attended. Some of Montgomery’s favorite moments were being able to see Howler monkeys, the loudest terrestrial animal in the world, as well as snorkeling in the Belize Barrier Reef, the second largest barrier reef in the world.

“I thought it was awesome,” Montgomery said. “I met a lot of new people and bonded. It was really fun. I think they’re trying to do (a Belize EL) again, so I’d definitely recommend interested people to apply. I learned a lot, and had a lot of new experiences.”

Jordan echoed Montgomery’s statement, describing Belize as a wonderful country and highly recommends any students interested try to attend if the trip is offered again.

After returning to the U.S., Beck remained interested in the Maya workers who were employed on a reservation. They got paid “about 25 to 35 dollars a day,” had to live on the reservation during the week and had to hike 6 miles on the weekends if they wanted to see their families.

Holler said she had never been out of the U.S. before, and had never had an experience like this, which became a deciding factor to attend.

“I was thinking, ‘I’m going to be graduating soon and I’m probably going to be working until I die, so if I’m going to do something I better do it now,’” Holler said.

The students felt that the trip was successful and several noted that they will use what they learned in Belize in their everyday lives. From a professor’s viewpoint, Eckstein noticed the parallels of research methodology between environmental science and psychology, which is her field of study.

“Students didn’t have internet access, so that made a big difference for our cohesion as a group but also well-being in general to be disconnected,” Eckstein said.

Additionally, Eckstein learned a great deal about how chocolate is made and has a new appreciation for chocolate and cacao. She said she now consumes less commercially available chocolate, which is just sugar and fillers. She also learned more about consumption and the use of natural resources.

Using rain showers and outhouses every day made Eckstein think of how much water is used just by going to the bathroom.

“I’m not saying we shouldn’t go to the bathroom anymore, I’m just saying that it encouraged me to think about the many resources we take for granted in our day-to-day lives,” Eckstein said.

Eckstein’s teaching relates to social justice and violence, which she saw greatly during the trip.

“We talked a lot to community members who were working on the property and talked and thought about labor conditions, exploitation of cacao workers, huge plantations and generally, seeing how students process their experience of being abroad and seeing (that) the comforts we have are not available to everyone,” Eckstein said.

Choate also saw parallels to her teaching, specifically with the Environmental Science and Sustainability 110 course she frequently teaches.

“The other piece I like to think about is sustainable development, and how do we not destroy the environment, feed the people and also make sure that they have an income,” Choate said. “That is something that was happening right in front of us.”

The locals are trying to conserve the Hickatee turtle, which has been almost hunted to extinction. However, it is a food source for a lot of the locals in the area, according to Choate.

“How do you conserve this species?” Choate said. “You can’t just go out and tell people not to do it, so how do you find this balance? Every story that we got into was complicated and required understanding not only the natural environment, but the social aspects as well.”