Historic Hulings Hall: A home and a haunting legend 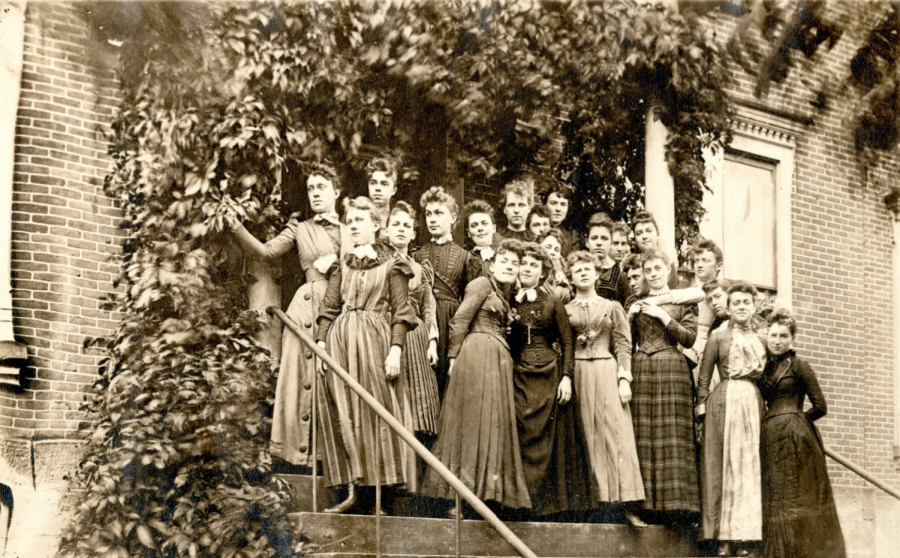 A group of students stand on the steps of Hulings Hall in 1890.

This story concludes a three-part series highlighting the histories and functions of campus spaces at Allegheny College. Hulings Hall was built in 1879 and served as the first on-campus residence hall for women after the college became coeducational in 1870.

A gentleman caller may be received from 6:30 to 7:30 p.m. only on Mondays, Tuesdays, Thursdays or Saturdays. Afternoon horseback riding lessons are compulsory.

These rules, just two of six, constitute what it meant to be a “lady” living and studying at Allegheny College in 1880.

After the 1833 founding of the Oberlin Collegiate Institute in Oberlin, Ohio, now called Oberlin College, other American colleges and universities began to admit women into higher education programs.

Allegheny College first admitted women in 1870, with the first graduates unable to receive the same type of undergraduate degrees as their male contemporaries. By the 1880s, the accomplishments of graduating women were recognized with formal degrees.

Initially, women enrolled at Allegheny were not residential students, and campus culture shifted when Hulings Hall was constructed on the western edge of campus in 1879, with funds from Marcus Hulings, regional oil man and college trustee.

“Hulings Hall is the embodiment of an idea that is destined to revolutionize every institution of learning in our country,” The Campus reported in October 1880. “It is more than a home for young ladies; its walls stand as evidence of the successful operation of coeducation.”

The Council of Independent Colleges’ Historic Architecture Project notes American architect Jacob Snyder as the Hulings designer, and expansions in 1905 and the 1920s, produced a four-story dormitory with an indoor gymnasium. By 1941, the capacity of Hulings nearly tripled with the additions of Brooks and Walker Halls. Today, four main sections — Hulings, Brooks, Walker and Walker Annex, which was added in 1962 — comprise the residential and dining strip along Park Avenue.

The 19th century design and 20th century updates and additions are starkly different, according to Allegheny Professor of English Jim Bulman, who described the original Hulings as Victorian. The large windows of Hulings can still be found on the Brooks facade, but the characteristic white columns of Brooks do not reflect the more ornate, less imposing style of the southern, Hulings end of the four-section structure. And as Brooks transitions to Walker and Walker Annex, the windows become smaller, more reflective of mid-20th century style.

“If they ever are making changes (to Hulings), I hope they don’t modernize it much,” Bulman said.

At the start of the fall 1880 semester, an initial eight rooms had been furnished by local churches and individuals, including women from Ohio and Ida Tarbell, who completed her Allegheny undergraduate studies in 1880. Additional rooms had been “supplied with furniture already in the hands of the board of trustees, so that there will be no lack of accommodations for all the fair daughters who may seek an education within these classic halls,” The Campus reported in 1880.

At the time, white women were permitted to take classes, but strict residential rules were enforced, and it wasn’t until the 20th century that women were granted more institutional freedom and men and women began to interact regularly on campus.

Hulings Hall and a pair of students became central figures of an Allegheny legend by the mid-20th century, after the additions of Brooks and Walker. Bulman was approached some 15 years ago, he recalled, to narrate an excerpt from the 1998 book, “The Painted Door, Ghost Stories of Allegheny College,” as part of a Northwest Pennsylvania Heritage project.

“Whenever I was given that (excerpt) to read, I had never heard of this,” Bulman said.

The pair of students, a couple, was interested in growing a future together after their time at Allegheny, and as part of a Greek tradition, the male student, a member of a campus fraternity, was tasked with climbing the Brooks facade to the Brooks balcony to pin his love, known to some as Sarah. The name Karen has also been used by students and campus community members to refer to the woman of the couple, who lived in Hulings Hall.

Sarah’s lover fell to his death during his attempted ascent.

“She decided that without him, her life was no longer worth living,” Bulman reads from “The Painted Door.” “Sarah hanged herself out of the third floor window of her Hulings room, reunited with her beloved once again.”

“The Painted Door” continues and describes the experiences of later residents of Hulings and Brooks, which include hearing strange noises, seeing strange shadows and reading “Sarah” written in frost on the windows of Hulings.

Bulman expressed disbelief in the rumored ghost of Sarah, and instead focused on the prominent role of Hulings in the college’s early coeducation roots. The Alleghenian of Allegheny College, the institution’s first annual publication, which made way for the establishment of the Kaldron yearbook in 1888, celebrated the hall and the women who were allowed to call it home.

“Now, peace and plenty, harmony and happiness, comfort and content beam from every window in Hulings Hall,” The 1881 Alleghenian reads. “May she in the future add all glory, honor and virtue to herself.”