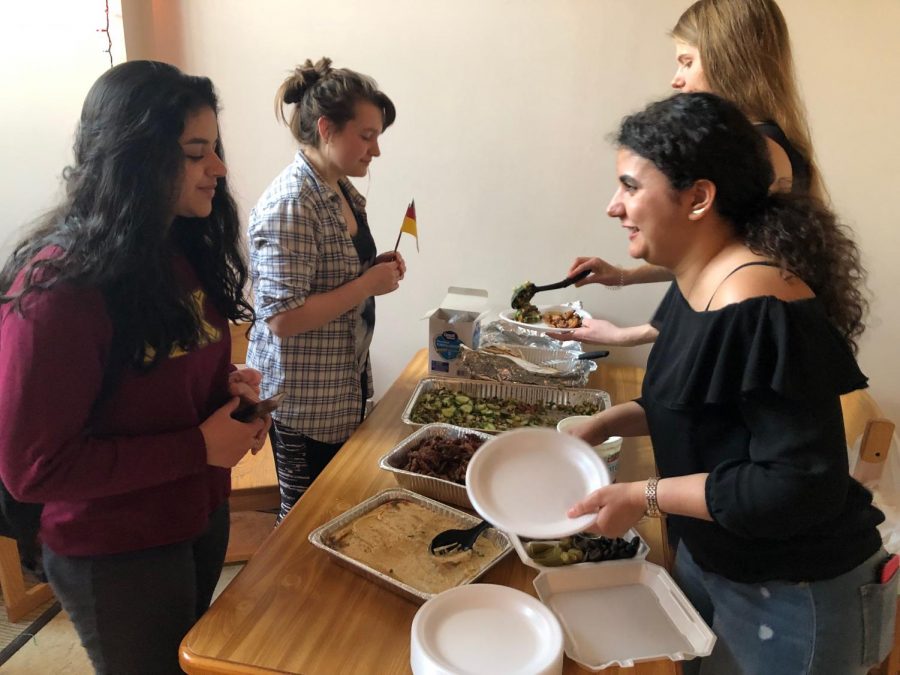 Crepes, currywurst and Kahoot were all used to celebrate culture at Allegheny College’s International Open House.

an culture through food, music and games.

“Our goal tonight is to give everybody a sense of what the international community on campus is and how we all come together,” said Samantha Keane-Paul, ’21.

Keane-Paul is a current resident of the German house within the Max Kade International Wing.

“It has been a lot of fun just preparing everything and getting ready,” Keane-Paul said. “We’ve been really looking forward to having this event.”

The entrances to North Village 1-C were kept open, allowing students to come and go from the event as they pleased. In addition, the doors to the various housing units inside the wing were propped, encouraging students to venture from one apartment to another.

Crafts and Kahoot games were located in the lobby of the building, central to all the different dining options.

Residents of the Max Kade International Wing also wandered throughout the building, immersing themselves in different cultures and connecting with other students.

“It is really fun to do events,” said Olivia Spinelli, ’19. “We all live our separate lives, but when we do events, we all get together.”

Spinelli was not the only student who was looking forward to the open house.

“I’m looking forward to the German food because it is a little piece of home,” said Josephine Thierhoff.

Thierhoff is an exchange student from Germany, who extended her time abroad at Allegheny. Originally, Thierhoff was going to study at Allegheny during the fall of 2018.

However, Thierhoff explains that she loved Allegheny so much that she extended her stay an additional semester.

During her time at Allegheny, Thierhoff has been living in the International Interest House.

The International Interest House is one of six Max Kade housing units, and is the only unit that does not have a language requirement. The other housing units include Spanish, Chinese, French, German and the MENA house, which focuses on Middle Eastern, North African and Arabic cultures.

The French housing unit made crepes to accompany the currywurst being served down the hall.

“(The residents of the French house) make crepes and we love it,” Olivia Spinelli, ’19 said. “Seeing other people try it is the most fun thing.”

Sharing food is just one way the Max Kade International Wing works towards being successful towards its overarching goal.

“It is a huge deal, to preserve culture and share it,” Spinelli said.

The goal of the Max Kade International Wing was established to promote cross cultural sharing and exploration, according to Allegheny’s website.

“It’s been a really great experience to have other people that are like speaking another language,” Keane-Paul said. “It is really special to be able to like share somebody else’s culture and their language.”

Other students agree with Keane-Paul and also feel as though they have benefitted from living in the Max Kade International Wing.

“Just living in this building in general has made me a more open-minded person,” said Emma Himelein-Wachowiak, ’20. “I thought I appreciated France, but then living here, I feel really almost bonded with the country in a way I wouldn’t have been.”

Himelein-Wachowiak also explained that living in the Max Kade housing units helped her with learning another language.

“It was really helpful to like practice what I was learning,” Himelein-Wachowiak said.

While the international housing units hold a variety of events throughout the school year, it is rare that all the houses come together for one event.

“We don’t usually do events with all the houses,” Himelein-Wachowiak said. “I really enjoyed having that collaboration and all having one goal together.”

Himelein-Wachowiak and Spinelli both encouraged more students at Allegheny to get involved with different cultures through taking classes or participating in events hosted by the Max Kade International Wing.

“It is all about sharing tradition,” Spinelli said. “It is a huge deal, to preserve culture and share it.”