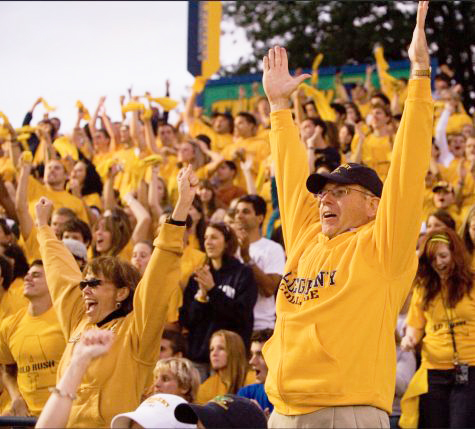 James and Mari Mullen cheer during an Allegheny College football game in 2010 at the Robertson Athletic Complex Football Stadium.

Eleven years ago, President James Mullen and wife Mari arrived in Meadville with an eighth grader and a fifth grader — daughter Frankie and son James. Now, the Mullens are leaving Allegheny College with a college graduate, a rising college senior and too many memories to pick a favorite.

As Allegheny’s 21st presidency comes to a close, Mullen reflected on his time at Allegheny and shared his hope for the future, saying he feels wonderful about his time as a college president and as a Meadville community member.

When not in his office or traveling, Mullen can be seen strolling around campus, waving to students and buying smoothies for people in the Henderson Campus Center. To Mullen, those “little engagements” while walking around campus are what he considers to be his favorite Allegheny memories.

“Those are very special moments to me,” Mullen said. “Sometimes, they’re coming at the end of a hard day or when you’re trying to deal with something significant. Sometimes, they’re just an impromptu chance to be reminded of how great you young people are.”

Throughout his time with the college, Mullen said he has seen Allegheny grow in more ways than one. The list of what he is proud of is neverending; however, the students who attend the college are what make Allegheny College special.

While Mullen said he does not consider himself to be someone who often looks back at the past with regrets, he cannot pick one particular incident that he looks back on in a negative light.

“I regret sometimes I didn’t move faster on some things,” Mullen said. “I don’t know if I can pick one particular thing. I regret sometimes that we’re not always the perfect community we can be, and I have a responsibility in that. Although I think we’re an amazing community, we trip and we fall, but what I don’t regret is that we get back up, and we move forward, and we try to be better.”

The next book volume on Allegheny is sure to decide what Mullen’s legacy will be, but he said he hopes his love and care for the college as a whole is what stands the test of time.

“I hope if folks remember one thing, it is that I cared deeply about the place, and I meant it when I said I loved their students,” Mullen said.

If he had more time at Allegheny, Mullen said he would want to teach, and while he did get to fulfill his dream of teaching at the college through a short course on the American presidency for a week in April, he said he wished he had been able to teach for longer.

“(The short course) reminded me of how much I love to teach,” Mullen said. “And there’s my regret. My biggest regret is that I didn’t teach while I was here. I would go in and do a visiting talk to a class, but I never taught a course, and every year, I said I was going to.”

Always remembering his love for Allegheny, Mullen said he plans to come back to campus to visit.

“There are so many relationships here that mean a lot to Mari and to me and our kids,” Mullen said. “This is their home.”

His visits will be made “very quietly,” Mullen said, as he does not want to shadow over President-elect Hilary Link, who will assume the presidency July 1.

“You have a great new president coming into Allegheny,” Mullen said. “She’s going to set an incredible legacy here over the next many years, and when I come back, I will come back like anyone who’s part of this family. I will just come back and enjoy a game or a play or a chance to see friends.”

While Mullen loves the campus as a whole, he said he does have a few spots at Allegheny that serve as a reminder of the college’s history — a history he loves and respects like no other. He said he measures his favorite on-campus locations by where he goes the day before and the day of commencement.

“The night before, I always take a walk, and I stand at the top of Brooks Walk, and I look down over that historic part of the campus,” Mullen said. “There’s something very moving about that, particularly at dusk. The history of the institution strikes me, and it’s a spot that connected with me the first day I began here.”

During his annual pre-commencement walk, Mullen said he visits the Civil War monument, and he is reminded of the history of Allegheny.

“It gives you a profound sense of our place in American history,” Mullen said. “I go down by the ravine, and I just walk through there with the memorials and reflect a little bit.”

Every day, Mullen said he pokes his head into Ford Memorial Chapel because its “certain serenity” helps him think.

“It’s a mission that attracts students from all over the country,” Mullen said. “It attracts students of all socioeconomic backgrounds, across race and gender and identity. It’s a most powerful manifestation of a liberal arts education.”

Allegheny’s curriculum and “tremendous teaching faculty” are what give Mullen hope for the college’s future.

“The core mission is its greatest strength,” Mullen said. “That will continue to be.”

As far as weaknesses, Mullen said he thinks Allegheny still has work to do in order for the rest of the country to realize “how great we are.”

“That’s partly attributed to our inherent humility, but I think that’s the ongoing work I know President Link is committed to,” Mullen said. “Our national reputation, which has grown, (is) still to grow … I’ll put what happens in the classroom here against anybody in the country.”

The face of Allegheny College, Mullen is not without Allegheny role models. A lover of history, Mullen said he admires and looks up to Allegheny students because of their passion and their belief in justice. One alumnae Mullen mentioned was Ida Tarbell, Class of 1880.

“It’s hard not to be at Allegheny and not be struck by the alumni who have come through here,” Mullen said. “When you start down the list of these incredibly accomplished figures in American history, you have to go to Ida Tarbell. Her picture is in Bentley and around campus, and I think back to the time in which she achieved international acclaim — what an incredible role model for all of us, young women going into journalism, for leaders to have courage and not be intimidated, I think she represents a lot of what’s great about Allegheny.”

After Mullen’s quiet transfer of power in July, he and his wife plan to “re-energize,” “take a deep breath” and “hang out a little bit” in Asheville, North Carolina. The Mullens have agreed to not entertain any jobs right now, and he said he looks forward to catching up on reading and writing about United States presidents — a personal favorite of his.

If Mullen could describe his Allegheny experience, he said it would be “a privilege.”

To conclude, Mullen offered his thanks to “everyone who touched our lives across 11 years.”

He said he hopes to cross paths with Allegheny family members for years to come, and to the members of the Class of 2019, he said their paths will be crossing sooner rather than later — “on the stage in about two weeks.”