From the tap: Exploring Meadville’s municipal water from source to sewer 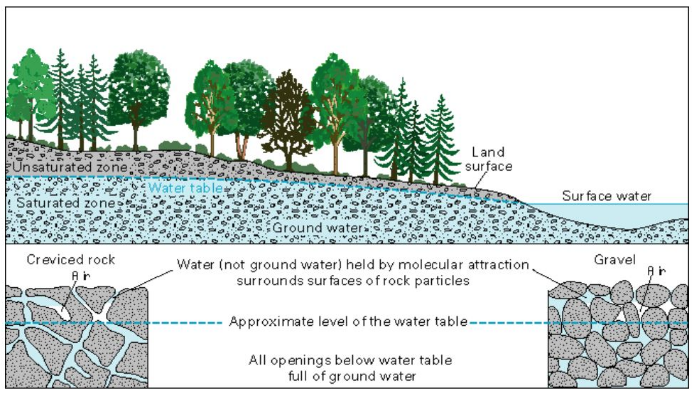 From the tap is a three-part series exploring Meadville’s municipal water from source to sewer. The full series can be found at alleghenycampus.com.

A kettle of boiling water rests on the stovetop, vapor escaping as you choose a bag of tea. After flipping through a row of bags, you settle on Earl Grey and turn back to the kettle just when it starts to sing. The scalding molecules steep the leaves, and you wait two minutes for your mug to cool. But you get distracted by the call of a child or a knock at the door, and when you finally raise the cooled mug for a first sip, some 20 minutes later, you notice a film.

The film covers the surface of the infused water like a thin, shimmery layer of oil left over from an oceanic spill. Though harmless, the film looks odd, so you take a spoon and try to remove the layer before reheating the Earl Grey. Tea is ready.

If you are using unfiltered tap water in Meadville, the film you may see is the result of a high mineral content in the water you used to enjoy your tea. Feeling refreshed, you turn on the faucet and rinse the empty mug, but a tea stain remains. The faucet valve closes, and the water disappears from view as it continues its perpetual and transformative journey.

The water molecules in Meadville’s municipal water supply are not sentient and do not speak, but they have a lot to tell us — about the region’s subsurface materials, the structures used to pump groundwater to Earth’s surface, the infrastructure used to distribute it, the technology used to disinfect it after use.

Notably, though, water’s journey from source to sewer is dependent on people — hydrogeologists, who study groundwater, certified water and wastewater systems operators, who oversee water treatment and distribution, and City of Meadville representatives, who help facilitate municipal water and wastewater management.

Together, these Meadville community members provide insight into how water flows from beneath the Earth, to homes, hospitals, schools and industries, and eventually into French Creek. By listening to the murmurings of water molecules, as translated by water works leaders, perhaps the film resting on your hot tea can become less mysterious.

A graduate of Allegheny College, class of 1982, Anderson started his hydrogeology career with Crawford County’s Moody & Associates in 1990, a well drilling contractor, and worked mostly on water supply development and coal mining permitting for 23 years.

The “story” Anderson referred to is the story of the water we use to bathe, maintain our fields, fuel our industries and hydrate our bodies; and the story begins under the Earth’s surface.

“Story in the rocks”

Because this region was glaciated thousands of years ago, area surface water, as well as groundwater now sourced for Meadville’s collective use, is a remnant of that powerful glacial history.

Before glaciation, Anderson explained, what is now known as the French Creek Watershed drained north into Lake Erie. The glacial presence dammed the watershed’s northward exit, and French Creek started flowing south and eventually into the Allegheny River near Franklin.

“Water is a solvent, and it’s going to dissolve things, so the characteristic of the water is based on whatever the rock was,” Anderson said.

Here, Anderson referred to the chemical characteristics of water, characteristics that are sometimes physically visible. For example, water hardness is a function of the sedimentary rock materials beneath Meadville’s municipal wells on Rogers Ferry Road.

Descriptions of water as “hard”or “soft” are based on the chemical composition of the rocky material from which that water is extracted. The film from your Earl Grey is a deposit of minerals, specifically calcium and magnesium carbonates, and this hard water film is common for tap water in previously glaciated areas containing rocks high in calcium and magnesium, like in Meadville, according to Rachel O’Brien, Allegheny College professor of geology. O’Brien serves as a Meadville Area Sewer Authority board member and has worked with some of her students at MASA and the Meadville Area Water Authority for the last two decades.

O’Brien has not forgotten her first meeting with former MAWA project manager, Don Nold, some 20 years ago. Walking through the MAWA well field, O’Brien asked Nold how she and her students could help the authority with research. Nold responded with a request for a three-dimensional model of the subsurface action and characteristics of the well field.

“And I said, ‘Well I’d like that too,’” O’Brien recalled. “There’s this kind of thinking that you can have X-ray vision or that there’s some kind of magical tool to figure that out, and you really can’t. It’s very, very complex.”

Visualizing subsurface systems is possible, O’Brien clarified, but the necessary technology is expensive and would not provide a clear picture of what happens underground. Geophysical imaging techniques, similar to CT scans or MRIs, can be implemented by sending surges of energy into the ground. But the resulting images only provide general ideas about subsurface characteristics and action and “are not like photographs,” O’Brien said. Thus, groundwater science, according to both O’Brien and Anderson, often requires drilling many holes in the ground.

What can be clearly understood, though, are the dissolved minerals that characterize water hardness and leave residues on tea mugs, pots, pans and other household items washed with tap water.

The consequences of these chemical interactions are largely a fixture of aesthetics and not harmful to human health, according to the World Health Organization. Meadville’s hard water does have a resistance to lather — no amount of soap could produce the same lather as softer water — and a certain mineral-heavy taste. To counter the taste of hard water, residents can install water softeners, which operate under the principle of cation exchange, a process of swapping one positively charged particle for another. Most water softening methods add salt to tap water to increase the sodium content of the water so that calcium and magnesium carbonates can be replaced by sodium carbonate. Softer water, while not better for human health than hard water, tends to taste less like minerals, cleans dishes more effectively, produces lasting suds with shampoo and makes better tea.

Because Meadville’s hard water is a consequence of the glacial legacy in the northeastern United States, the hardness of the city’s unfiltered tap water is directly related to the aquifer from which Meadville municipal water is sourced. The regions north and west of Meadville were covered by the North American Ice Sheet as far back as 150,000 years ago, O’Brien said. Some evidence of older North American glaciation exists, but the characterization of older ice becomes less clear the farther back you look. The regional landscape experienced at least eight periods of advance and retreat in those 150,000 years, and the most recent retreat, O’Brien estimated, occurred sometime around 16,500 years ago. Geoscientists refer to the freezing and melting of ice sheets over time as cycles of advance and retreat, and during retreat periods, when glacial ice melts, it can deposit sediment in a few different ways.

As ice melts in place, it drops sediments, which are described as glacial till. Sediments can also be deposited by an outwash process, in which water running off an ice sheet carries sediment with it. Because tills are directly deposited by melting ice, O’Brien said, they are typically comprised of particles of varying size and shape and are considered a heterogeneous population of sediment. In contrast, outwash deposits are homogeneous and “well-sorted” because the running water in which they flow only has a certain carrying capacity and discriminates based on sediment size and shape. These homogeneous populations offer the best conditions for sourcing groundwater.

“Well-sorted sand and gravels are the best aquifer systems we can get,” O’Brien said.

Well-sorted aquifer systems are the “best” for sourcing groundwater because of two important factors: high porosity and high permeability. Aquifers are not underground ponds or lakes; rather, they are a subsurface layer of rock that can hold and transport water molecules. For rocky sediment to hold water or other fluids, it must be porous and have void space, or pores among sand, gravel, silt or clay particles. Fluid held in pores must also be able to move between pores — so an aquifer must be permeable.

“There isn’t a set value of porosity or permeability,” O’Brien said. “If a rock unit has enough porosity and pore space to make pumping water from it economically viable, we call it an aquifer. So it’s not just a scientific definition. Society thinks about it from an economic side too.”

Porosity and permeability, more generally, are used to evaluate movement of other subsurface materials, such as natural gas and oil, but for water specifically, porosity and hydraulic conductivity — the type of permeability specific to water movement — are used to describe an aquifer’s storage and transport functions.

A typical unconfined aquifer system is not inhibited by layers of impermeable rock and is comprised of several zones, including the vadose, or unsaturated zone, which is close to Earth’s surface, and the saturated zone. The two zones are separated by a pressure threshold called the water table. Below the water table in the saturated zone, O’Brien said, pressure is greater than atmospheric pressure, so water can move through pores of its own energy, though with water deep in the ground, pumps are still used to pull water to the surface. To extract Meadville’s municipal water, MAWA pumps water from the saturated zone of Meadville’s unconfined aquifer, which is less than 100 feet deep. What can easily be forgotten, according to O’Brien, is the relative sustainability of any given aquifer.

O’Brien likened an aquifer to a bank account and explained that withdrawals from an ATM are reflective of withdrawals from well systems — a certain balance is available. Deposits into an account represent the recharge rate of aquifers, or how much time and what area of land an aquifer needs to replenish its water supplies.

Anderson described the sand and gravel deposits of Meadville’s aquifer as “very extensive,” and said that recharge supplies can come from surface water, from walls of stream valleys and from adjacent bedrock aquifers.

“If French Creek dried up, I might be worried then,” Anderson said. “But there’s millions and millions of gallons of water out there. More water than the city needs.”

O’Brien said she agrees with Anderson’s assessment of Meadville’s plentiful supply of water, but emphasized the importance of furthering our understanding of the full recharge area of Meadville’s aquifer, of the timeline of recharge and of water systems in general.

“The water levels in our aquifer systems are not dropping,” O’Brien said. Water in the Ogallala Aquifer in the Great Plains region of the United States, she continued, is being depleted faster than the aquifer can recharge.

“That’s not happening here, which is fabulous, but as a scientist, I feel like it’s important for us to know more,” O’Brien said.